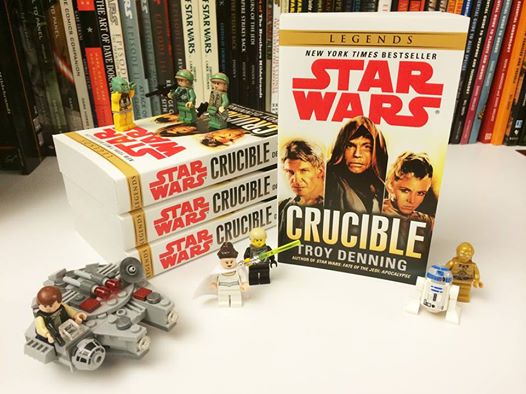 ‘Crucible’ first came out almost a year ago today on July 9th, 2013. It was arguably one of the most highly anticipated installment in the ‘Star Wars’ franchise in recent memory. Publisher, Del Rey Books, advertised the novel as being the beginning of the end for the “Big Three” as they reached their rightfully deserved retirement years:

“Han Solo, Luke Skywalker, and Princess Leia have spent a lifetime fighting wars, bringing the Jedi back from extinction, raising families, and saving the galaxy more times than they can count. They’ve earned the right to rest on their laurels and let the younger generation shoulder the burden–but fate has another adventure in store for our heroes, a quest only they can tackle and hope to survive…”

Troy Denning, a veteran ‘Star Wars’ novelist, seemed like the perfect choice to tackle one last great adventure for Luke, Leia, and Han. ‘Crucible’ is Denning’s thirteenth installment in the galaxy far, far away that is cherished by fans across the globe. He first joined the ranks as a ‘Star Wars’ author back in 2001 with his entry in ‘The New Jedi Order’ series, ‘Star by Star.’ For twelve years, Denning delved into the adventures of Luke, Leia, and Han in bestselling series such as ‘The Dark Nest,’ ‘Legacy of the Force,’ and ‘Fate of the Jedi.’ He has been at the forefront of the ‘Star Wars’ expanded universe and clearly has an innate understanding of the true personas behind the beloved characters from the ‘Original Trilogy.’ If anyone could tackle this trailblazing story, it was Denning. And he delivered.

The antagonists in this story needed to be different. We have seen the “Big Three” tackle alien invasions, Sith Lords, and governmental oversight. ‘Crucible’ would need a new kind of villain to justify a natural “passing of the torch.” The solution is the Qreph brothers, a pair of Columi who boast an exceedingly impressive intelligence. This threat is something not often seen in ‘Star Wars’ and rarely as well delivered. The Qreph’s are highly intelligent brothers whose sole goal is to corner several major industries throughout the entire galaxy. They strive to execute a hostile, economic takeover and throw the galaxy into turmoil. This is a truly fitting, and unique, challenge for our heroes.

‘Crucible’ does a fairly decent job at pulling our protagonists into story, in the way of an old friend, Lando Calrissian. I was personally very excited to see Lando back and playing a large role. He was always a favorite of mine, and thought his characterization meshed well with the other heroes of the ‘Original Trilogy.’ Denning nails him in ‘Crucible’ and recaptures his presence when he first stepped onscreen in ‘The Empire Strikes Back.’ 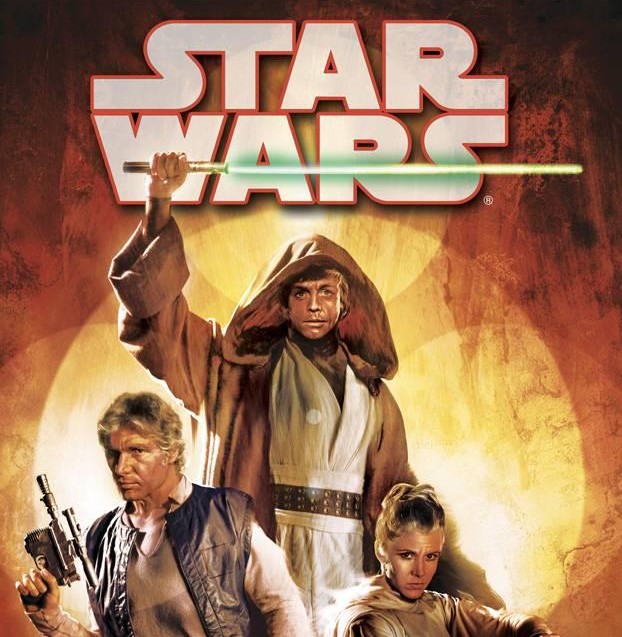 In addition to the our main cast of characters, Denning does an excellent job of including a decent amount of secondary characters, both new and old. While these secondary characters had a presence in ‘Crucible,’ Denning was careful to not let them steal the show or sidetrack the reader. We see some familiar faces like Ben Skywalker, Tahiri Velia, and Merta Gev. We also see a fresh batch of ‘Star Wars’ characters that aren’t just filler. All there roles make sense and don’t feel forced into the story. These include Omad Kaeg, Dena Yus, and the alter ego of a familiar foe, Savara Raine.

We explore a new setting in ‘Crucible,’ yet it’s one that feels familiar. The majority of the story takes place inside the Chiloon Rift, a dangerous nebulae of asteroids that falls outside of Alliance Space. It presents a fair amount of threats to our heroes, as witnessed when some thirty thousand miners become casualties of the Qreph Brothers insanity.

We also get some nice tie-ins to ‘The Clone Wars’ TV show, by way of the Mortis Monolith. We get to see Luke explore something similar to Mortis and we see him truly learn more about the Force than ever before. Its a mystical environment and one that calls upon the fantastical aspects of the ‘Original Trilogy.’ Readers will enjoy the payout for this novel when they reach the final confrontation. Force battles can be confusing. Some authors have a hard time conveying whats actually happening to the reader, and confusion ensues. Denning has proven in the past, notably ‘Apocalypse,’ that he can handle a battle sequence beyond the physical realm. He doesn’t disappoint here either. He literally dips inside the fabric of the Force and while the results might be bizarre at times (Han becoming a patchwork creation of multiple species), the explanation comes through in the end.

Overall Denning does a great job with ‘Crucible,’ pulling some solid sci-fi elements into the story. We see biots who are manufactured creations of living flesh around a machine skeleton. We see some old school space navigation through the Rift and “The Bubble.” But best of all, we get to see Luke, Leia, and even Han tackle the Force, head-on. While it’s not a story that really flaunts itself as the last adventure of the “Big Three,” that’s what it really is. With the recent branding of the Expanded Universe becoming “Legends,” this will ultimately be the last story told. While it’s somewhat lacking in that regard, I don’t blame Denning. He did the best with what he knew at the time.

Ultimately Denning excels in bringing us an entertaining story. It brought back the “feel” of the ‘Star Wars’ we all know and love. It moved the characters forward, and gave them logical outlooks for the future. And it gave us a colorful backdrop that I found invigorating.

You can now purchase ‘Crubcible’ as a mass market paperback for only $5.78, here! Yoda’s News would like to thank Alexandra Coumbis with Del Rey Books for providing a review copy of this book. Share your thoughts with us online, on Twitter, at @arybak89 (Alex Rybak) and at @yodasnews (official Yoda’s News handle).