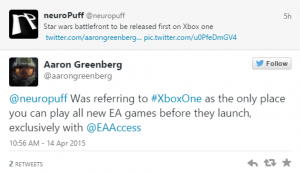 Star Wars Battlefront, EA’s first-person shooter due for release in late 2015, will be playable first on Xbox One, according to a Microsoft executive.

Aaron Greenberg, who leads Microsoft’s games marketing division, told a fan on Twitter that the game would be accessible on Xbox One before it ships on PlayStation 4 and PC. 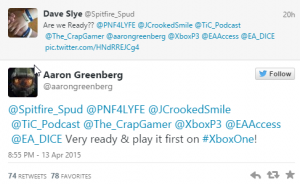 Quite how the Star Wars title will come first to Xbox One was not explained by Greenberg, though the most likely outcome is that the project will be available a few days early for EA Access members.

EA Access is a $5/month games subscription service (£4/month in the UK) that offers members early admission to its key releases. In the case of previous titles, such as FIFA 15, subscribers were able to play the game a week early for a total of six hours. Saved data and progress also carried over for those who bought the full game.

Electronic Arts originally wanted EA Access to appear on both PlayStation 4 and Xbox One, but Sony rejected the membership program.

EA Access also provides subscribers with a collection of free games such as Battlefield 4, Need for Speed Rivals, and Peggle 2. Customers have unlimited access to these titles for as long as their membership lasts.

Battlefield developer DICE first started working on Star Wars Battlefront in the first half of 2013. Details of the game remain a mystery, but a reveal trailer is due to air on Friday April 17 at 10:30 AM Pacific.

A build of the game is also expected to be showcased at a Star Wars Celebration event this week in California. Those who attend “will have a chance to see gameplay behind closed doors during the show at our official booth along with a few other activities starting that Friday,” according to EA.