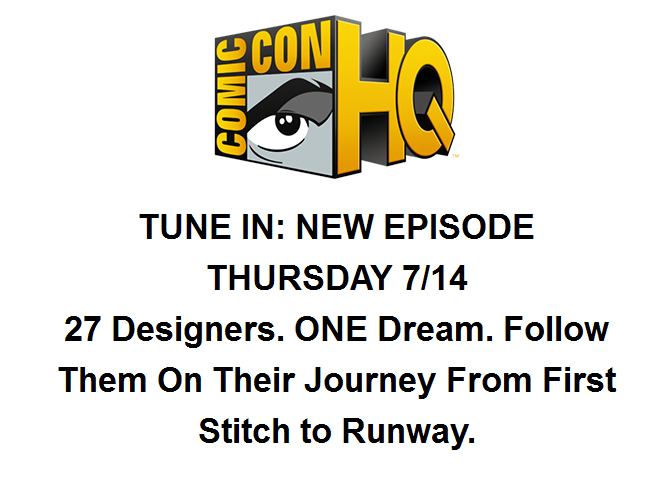 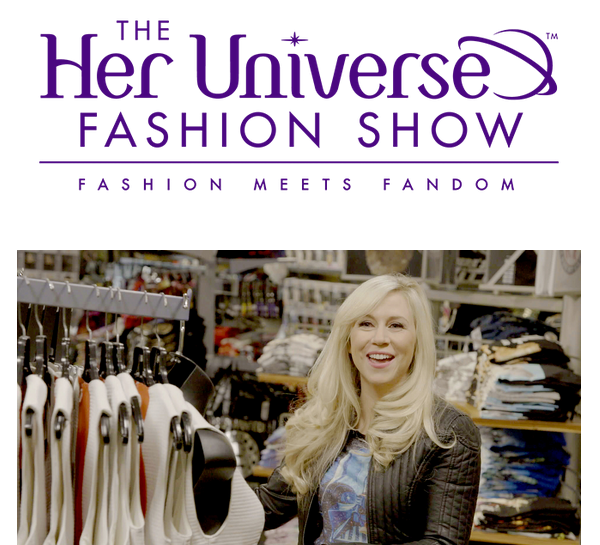 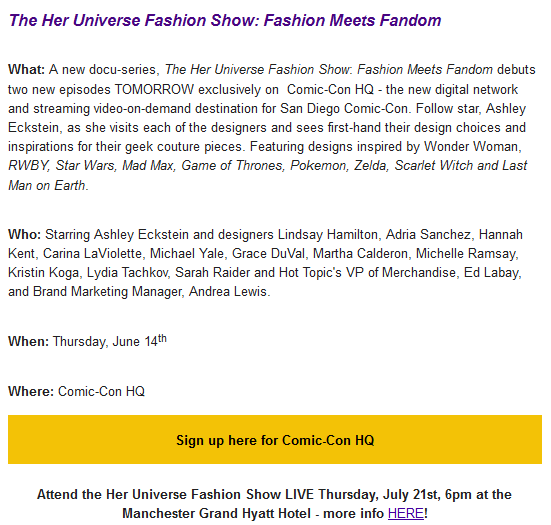 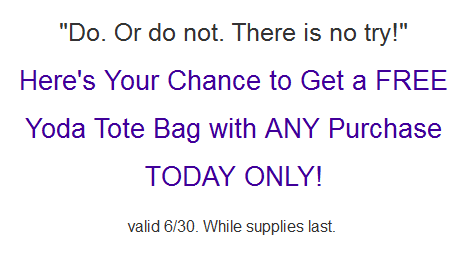 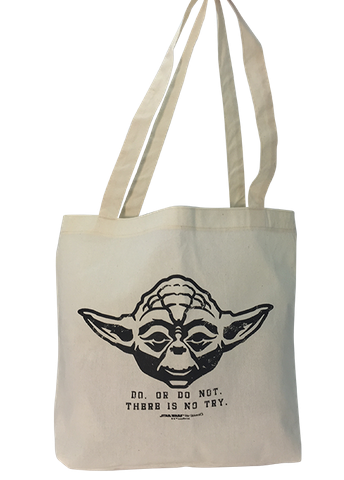 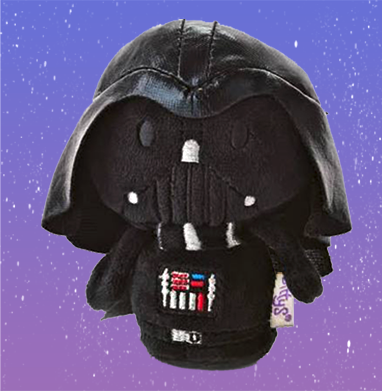 For Any Fangirl
This Con Season
The Fangirls Coloring Book

Are you a Fangirl? Know someone who is? For geeky girls who love comics, sci-fi, gaming, cosplay and everything else celebrated in the wonderful world of fandom, Her Universe Press now has the ultimate accessory – the Fangirls Coloring Book! With convention season upon us, and warm summer days, fangirls can relax with the perfect coloring book or pass the time entertaining themselves while waiting in the long lines at sci-fi/comic conventions with this handy “must have” for any nerdy girl from 1 to 100!

Featuring fun Illustrations by fan favorite artist Katie Cook and authored by Katie and Her Universe founder, and voice of Star Wars’ Ahsoka Tano, Ashley Eckstein, the Fangirl Coloring Book features a colorful variety of fangirls from the world of geekdom. Choose from over 15 different fangirls on 50-single-sided pages to find the ones that are most like you! Written and illustrated by two ultimate fangirls, and designed with a spirited love for nerdy girls and their interests, the Fangirls Coloring Book will provide any true fangirl with hours of fun, empowering, geeky expression and the creative joy of coloring! The Fangirls Coloring Book is NOW AVAILABLE online at Amazon.com. 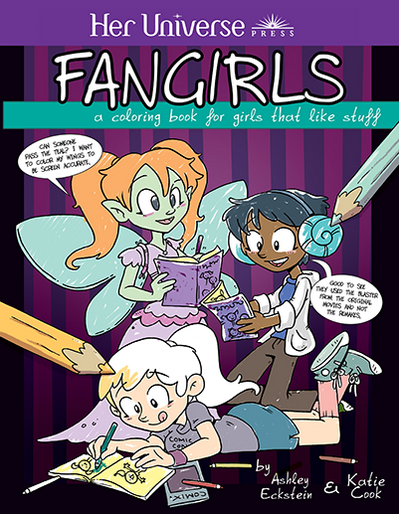 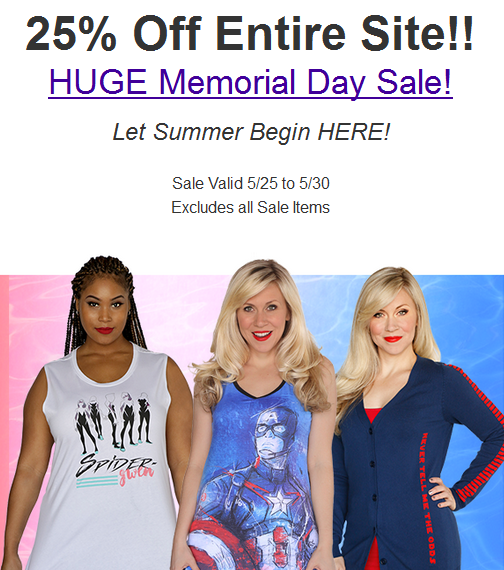 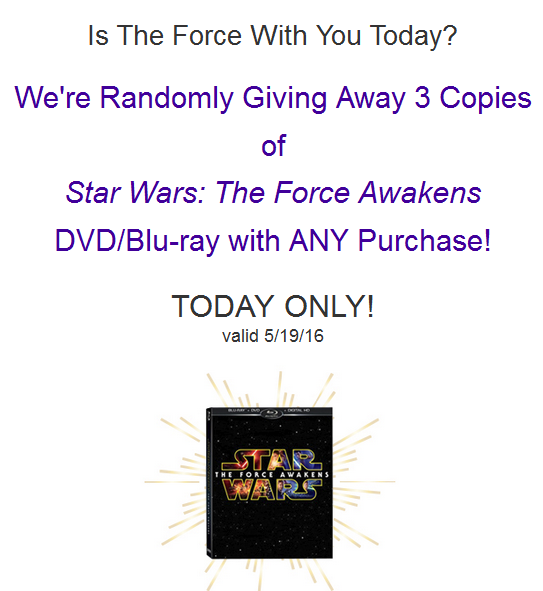 Click below to shop and a chance to get a copy of Star Wars The Force Awakens! 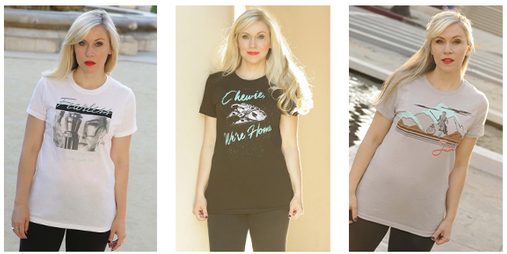 A limited edition fashion collection inspired by Star Wars The Force Awakens.  Available at select Hot Topic Stores and Hottopic.com.  20% off online only at Hottopic.com. 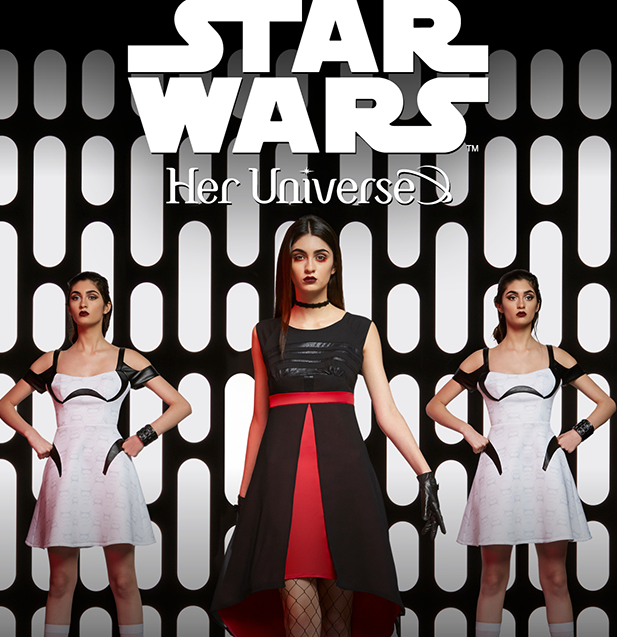 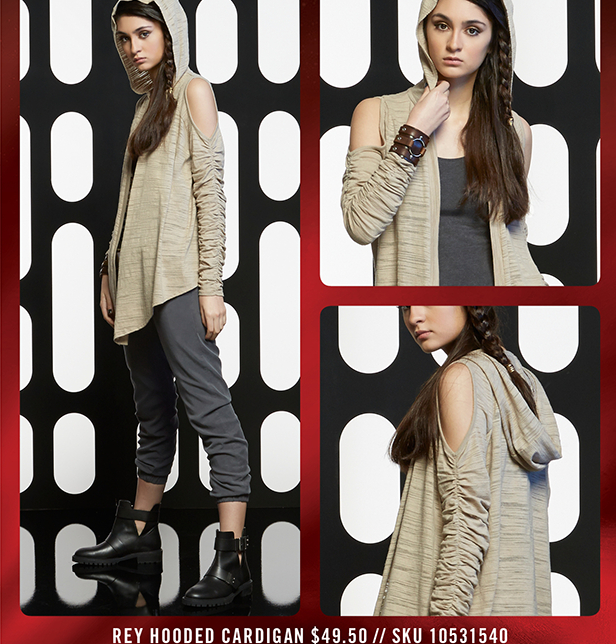 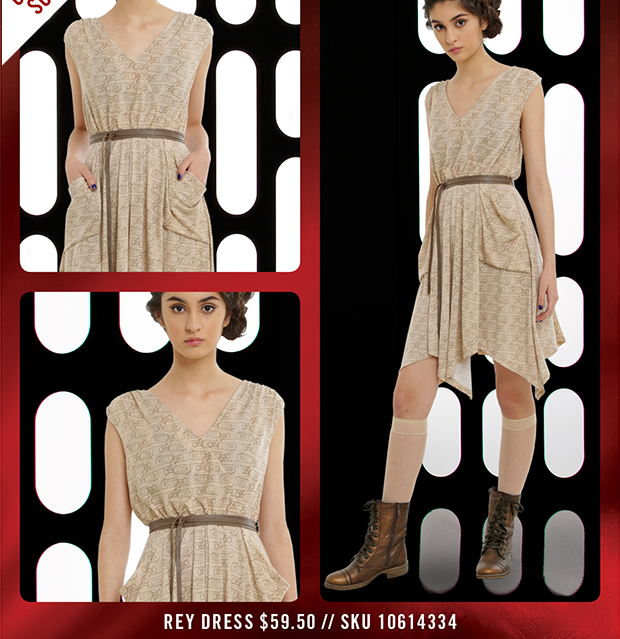 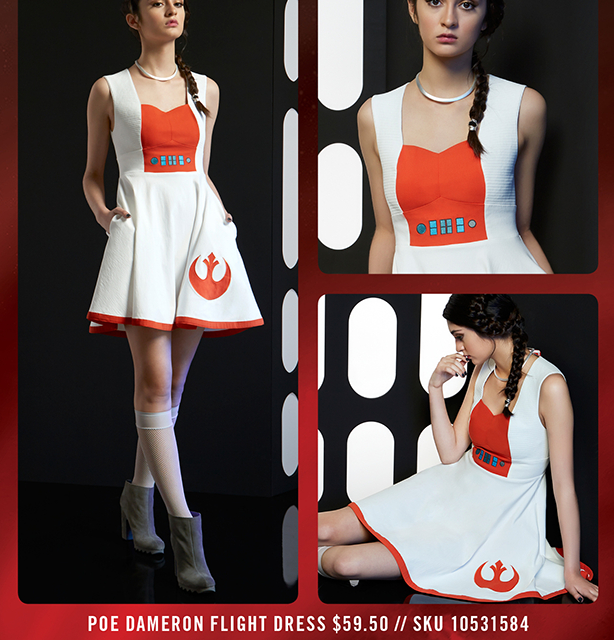 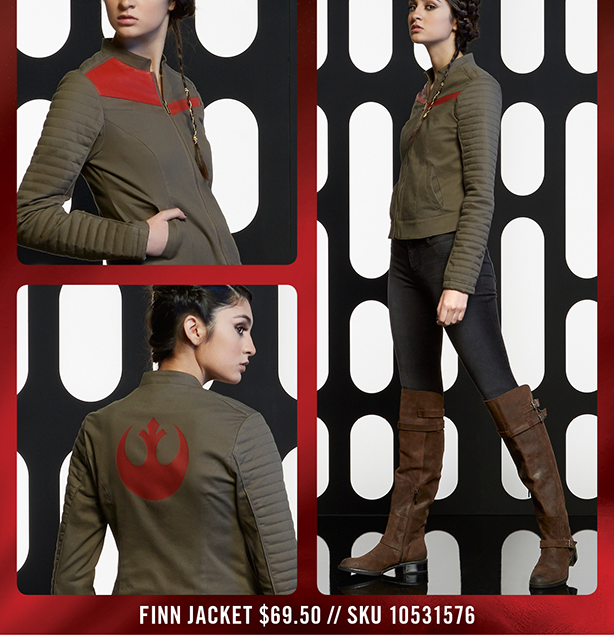 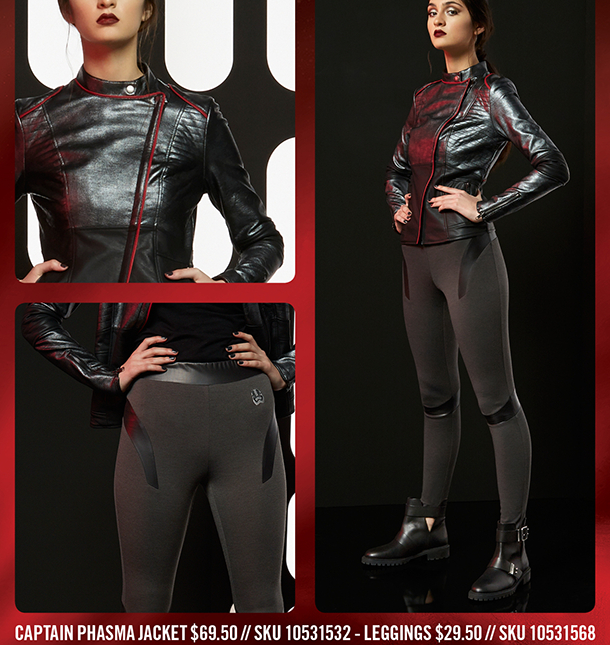 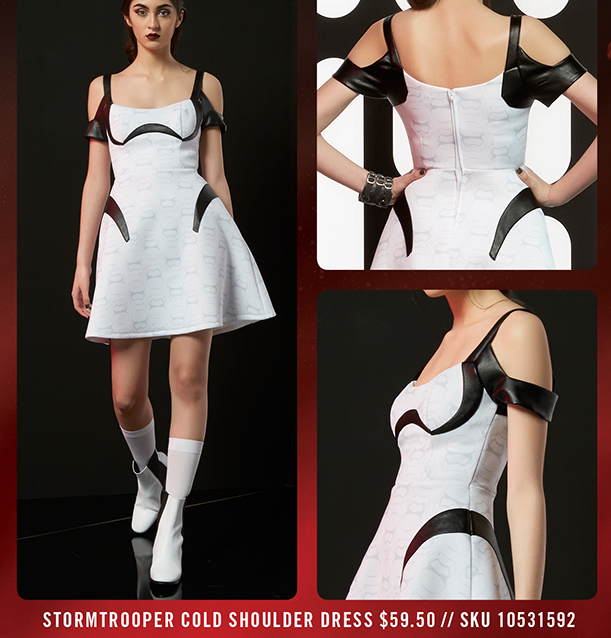 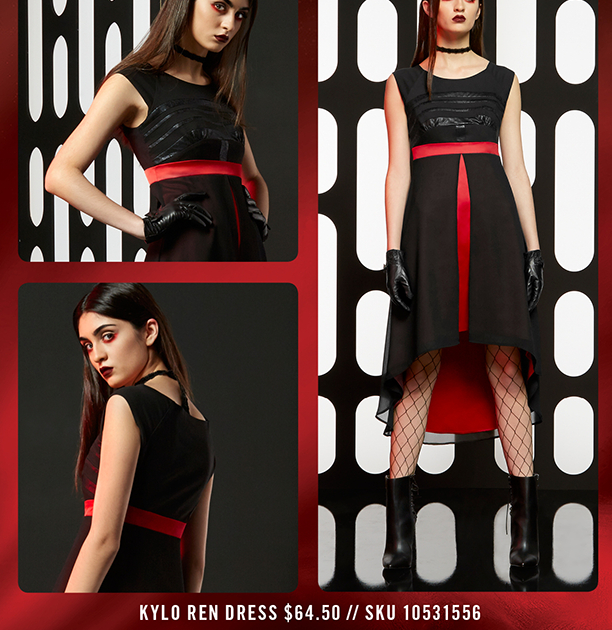 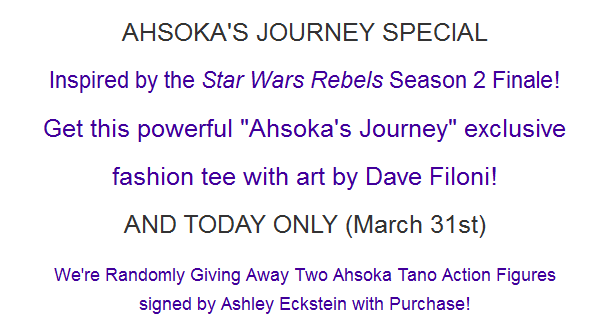 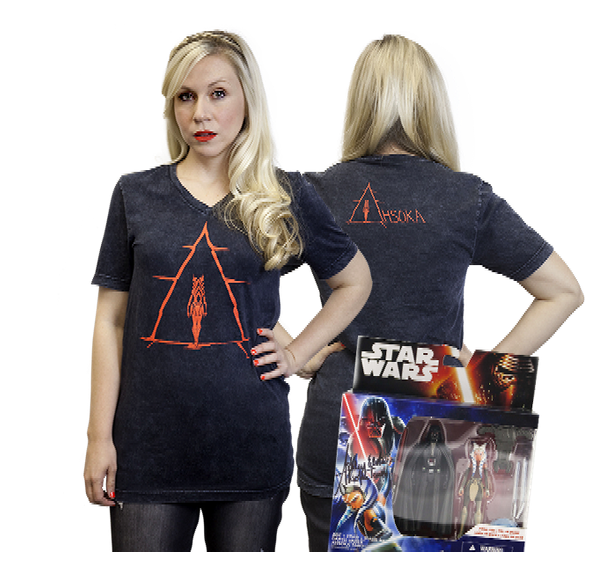 Calling All Designers! Now is Your Chance to

Design a Fashion Collection with Her Universe

Designer Submission Process Opens Today for the 2016 Her Universe

NEW YORK, NY- March 30th, 2016 – The Her Universe Fashion Show, the ultimate runway for fangirl fashion, returns to the world’s premiere comic book and popular arts convention, San Diego Comic-Con, July 21st 6:00pm at the Manchester Grand Hyatt Hotel. This year, in addition to submitting designs online, designers in the Southern California area will have the opportunity to submit their geek couture fashion concepts in-person to a panel of judges from Her Universe and Hot Topic at Hollywood and Highland in Los Angeles on April 23rd beginning at 10am. Designers from all over the country are welcome to submit and will also have the opportunity to submit video explanations of their designs if they cannot attend the open call. Twenty-five designers will be selected to compete in the Her Universe Fashion Show at SDCC for the chance to win the opportunity to design a fashion collection with Her Universe that will be sold at Hot Topic – the leading pop culture retailer. This year is extra exciting because the entire process will be filmed for a docu-series to air on the new Comic-Con channel, Comic-Con HQ.

This third annual must-see “geek couture” fashion show once again offers fans and amateur designers, male or female, the opportunity to submit their own women’s fashion designs based on anything that is celebrated at Comic-Con, original or inspired by popular media. The design competition submission process is OPEN NOW and designers, 18 years and older, can submit designs to be considered for the fashion show online here. All applicants must enter online even if they attend the in-person open call in Los Angeles. The deadline for submissions is 11:59pm PST on Sunday, April 24th, 2016 and the twenty-five finalists will be selected and notified by Wednesday, April 27th, 2016.

“My favorite part of The Her Universe Fashion Show has been getting to know all of the designers behind the scenes,” said Her Universe Founder Ashley Eckstein. “With the new docu-series on Comic-Con HQ, fans will get to know each designer and follow their process and journey to the runway at SDCC. There are so many talented designers out there that just need the opportunity and platform to showcase their skills. I encourage fans to submit and no experience is necessary!”

“We always put the fans and community first at Her Universe and the fashion show is an example of our mission,” added Michael Rego, Chief Executive Officer of The Araca Group, Eckstein’s partner in Her Universe.

The Her Universe Fashion Show will be hosted by Eckstein with an all new group of aspiring designers, from a variety of backgrounds and experiences, who will present their original “geek couture” designs on the runway. There will be three winners chosen at this year’s fashion show. The third winner will be chosen by the Comic Con HQ viewers at home.

Eckstein will be an Executive Producer for the docu-series along with Blondie Girl Productions owned by Ashley and Jennifer Tisdale.

All media inquiries including attendance and coverage of the fashion show should be directed to Her Universe publicist Dan Madsen at dmadsen@araca.com. 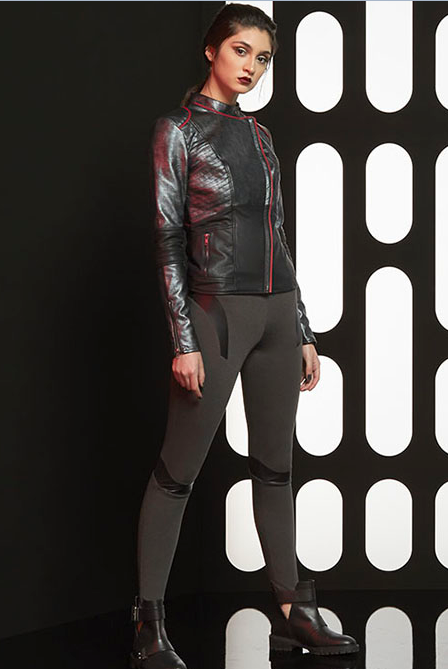 The Chicago Comic & Entertainment Expo – also known as C2E2
– is returning to the Windy City March 18th – 20th in the South Building at McCormick Place. You’ll find an amazing selection of new Her Universe items in the C2E2 ReedPOP Supply Co. store located on the level 3 concourse – from Star Wars to Marvel, Doctor Who and Star Trek! It’s going to be an epic event! 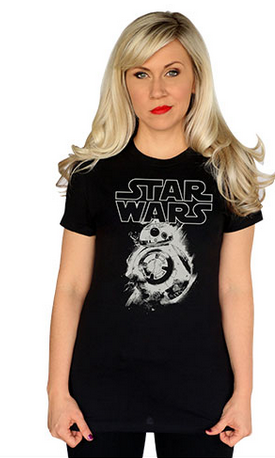