Via Comicbook.com:
There’s been a lot of discussion in the past week about Star Wars movie titles, since the title to Episode VIII was revealed as Star Wars: The Last Jedi. The name has set off fierce debates: is it singular or plural (or referring to two singular characters at different points in the movie)? Is the dialogue and crawl of Star Wars: The Force Awakens a clue or a red herring? Why is it red? Why does it sound so final when it’s the middle chapter? Yeah, people are talking, and it’s just a title.

It should come as no surprise then that fans are asking all sorts of titular questions of those in charge of the Star Wars world. With an active twitter account, Star Wars Story Group’s Pablo Hidalgo fields questions nearly constantly about canon and continuity, and occasionally gives a glimpse behind-the-scenes as well. When asked by a fan on twitter if there were any alternate titles to the first of the sequel trilogy movies, Hidalgo was very forthcoming.

“There was a very early version called ‘Shadow of the Empire,'” he revealed. “But that was even before the director [J.J. Abrams] came aboard.” 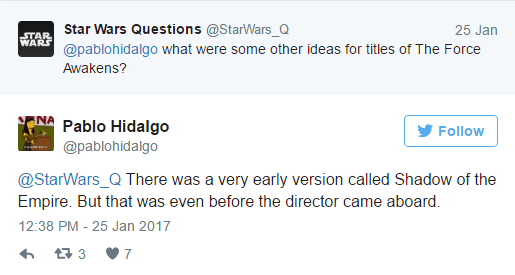 If that name sounds familiar, then you may be a fan of comics, novels, junior novels, video games, trading cards, role-playing games, toys, collectibles, or basically anything Star Wars outside of the movies. A vast-ranging multimedia project, Shadows of the Empire took over the Star Wars expanded universe (now called Legends) in 1996, introducing the characters Dash Rendar and Prince Xizor, greatly expanding on Boba Fett and the other bounty hunters of the Star Wars universe’s roles, and exploring the galaxy in the time between Star Wars: Episode V – The Empire Strikes Back and Star Wars: Episode VI – Return of the Jedi.

Obviously, that title would not have had much, if anything, to do with the products that used it beforehand. Supposition would suggest the disconnect was a reason they steered clear of such a name; still, we did see the “shadow of the Empire” fall across the galaxy again, in the form of the First Order, so that original title was still felt.

As for Star Wars: The Last Jedi, it was the first title writer/director Rian Johnson had for Episode VIII, so there probably won’t be any big revelations there later.

Star Wars: The Last Jedi, from writer/director Rian Johnson, is in post-production now for a December 15, 2017 release. The film follows-up and continues the story of the next generation of the saga as Rey, Poe, Finn, and Kylo Ren find their place in the galaxy and follow the legacy of Luke Skywalker, Leia, and Han Solo. Daisy Ridley returns to star as Rey, with other returning stars John Boyega, Oscar Isaac, Adam Driver, Domhnall Gleeson, Gwendoline Christie, Peter Mayhew, Andy Serkis, Anthony Daniels, Lupita Nyong’o Mark Hamill, and Carrie Fisher as General Leia Organa. Benicio Del Toro and Laura Dern join the cast in as-yet-unrevealed roles.