The first 6-inch The Black Series exclusive for Entertainment Earth!

Entertainment Earth Exclusive! Bring home an entire army in one box with this Star Wars The Black Series Imperial Forces 6-Inch Action Figures – Entertainment Earth Exclusive. The set brings you four 6-inch scale plastic action figures in the employ of the Galactic Empire – including one you’ve never seen before as a toy! Each features awesome weapons and amazing paint, so you really should pick up a few of them to serve Darth Vader and the Emperor on your toy shelves. Ages 4 and up.

Sandtrooper Sergeant – The Black Series debut! Sandtrooper Sergeant includes a white pauldron, backpack, rifle, grenade launcher, and Stormtrooper blaster, plus his survival backpack. Measures 6-inches tall and sports 26 points of articulation.
Crimson Stormtrooper – World action figure debut! This red Stormtrooper has never before been seen as an action figure in any size, so here’s your chance to get the very first one. With 26 points of articulation, he measures 6-inches tall and serves the will of the Emperor with a rifle and blaster.
Lieutenant Oxixo – The Black Series debut! As a TIE Fighter pilot, this 6-inch tall figure serves the Imperial forces on the Death Star above Endor. He has a uniquely painted helmet with a distinctive silver crest, distinguishing him from his fellow squad members in the Imperial Navy. Lieutenant Oxixo boasts 24 points of articulation and a working holster.
R2-Q5 – The Black Series debut! With spinning wheels, a rotating dome, and a retractable third leg, this black robot conceals all sorts of secrets under his bronze panels! He measures 3 1/4-inches tall and sports 6 points of articulation. 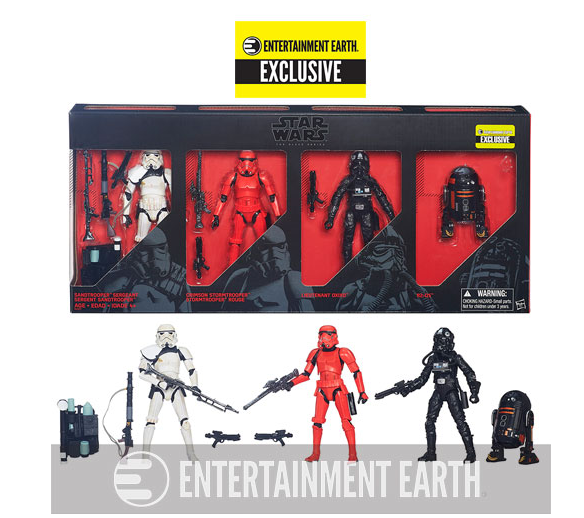