Star Wars: Episode IX is finally being released this year, so it’s no surprise the Internet is currently full of theories and ideas about the beloved franchise. According to one theorist, that includes a hidden reference to Darth Vader in Star Wars: The Last Jedi.

Recently, Reddit user thecircularblue shared an interesting idea to r/starwarsspeculation, a subreddit “for those who want to speculate on any Star Wars news, theories, or new and old leaks” and “a place for you to post your wildest of theories.” According to them, there’s a hidden/subliminal image of Darth Vader in Star Wars: The Last Jedi during a scene with Snoke.

“There’s an image of Darth Vader mixed with Snoke during his interaction with General Hux on the Star Destroyer bridge,” they explained. “Vader’s mask even sits correctly the way it would fit on Snoke’s face. The glint in Snoke’s eye show’s where his eye would be behind the mask’s lens. Not only that, but said glint, in addition to the rectangular ceiling light, shows where light would be reflecting off of the lens. It’s akin to when Vader is fed up with Admiral Ozzel in The Empire Strikes Back, being that a leading dark side Force-user is castigating a subordinate officer. The images show how to see it (or the easy way by using the curve of your hand to cover Snoke’s face, from the left, up to his nose). It’s either a cool coincidence or intentional.”

While this doesn’t necessarily mean anything, we like to think it was a purposeful aesthetic choice made by director Rian Johnson. Someone suggested the user tweet their discovery to the director to get confirmation, but they don’t have a Twitter account.

“I don’t have twitter, but that’d be way cool if he became aware of it. I was idly looking at Star Wars stuff, and it just came to me. I was blown away. I think of the impact this must of had on the viewer’s subconscious seeing it on the big screen – especially since Snoke’s projection was gigantic. Rian Johnson, his team, Lucasfilm, and Disney are illin’,” they replied.

While some people thought this was a bit of a stretch, many other Star Wars fans embraced the page’s acceptance of wild theories and were quick to praise the discovery. 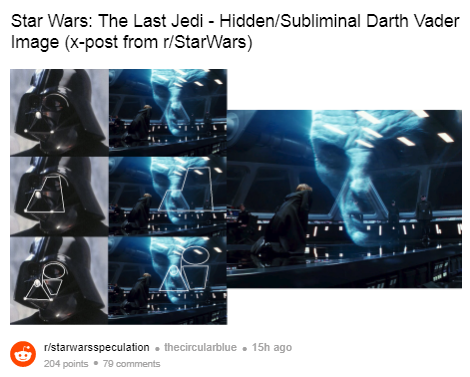