With the update, four new characters from Rogue One: A Star Wars™ Story have been added into the game including the Imperial Death Trooper and the TX-225 Assault Tank from the Galactic Empire, and Keredian Partisans and Rebel Demolitionists from the Rebel Alliance. Death Troopers, who are the elite soldiers of Imperial Intelligence, were featured in the recent movie as bodyguards and enforcers for Director Krennic, and has been one of the fan favorites since.

Star Wars™: Force Arena is also introducing a new feature in the Guild System, strengthening the social aspect of the game. Guild members can now freely request and donate character cards to others in the same guild. Also, Guild members can take part in missions together and receive special card packs after completing each mission.

One of the biggest changes to the recent update is in the game’s balance, starting with the 2vs2 normal match. While players will continue to play for a better rank, tier, more credits and card packs in the 1vs1 ranked match, the 2vs2 normal match is now a non-ranked match, meaning that players can play the game more casually without affecting their rank or tier, but still receive credits and card packs after victory. Also, players now taking part in 2vs2 normal matches will each play with the same level deck, bringing a more balanced, fair matchup for each battle.

Replays are now available in Star Wars™: Force Arena, and players can view all matches they’ve played for the past three days. Also, players can view Top 20 matches based on stats including leader kills, squad kills, number of tower destructions, and number of comebacks wins. The Top20 match highlights will be renewed every 4 hours.

“We hope players have more fun and share great strategies with each other through newly introduced character card donations and Replays in Star Wars™: Force Arena,” said Seungwon Lee, Chief Marketing Officer of Netmarble Games. “Now players can enjoy 2vs2 in a fair environment without worrying about rank drop and also bring their best game with four new characters including the Death Trooper.” 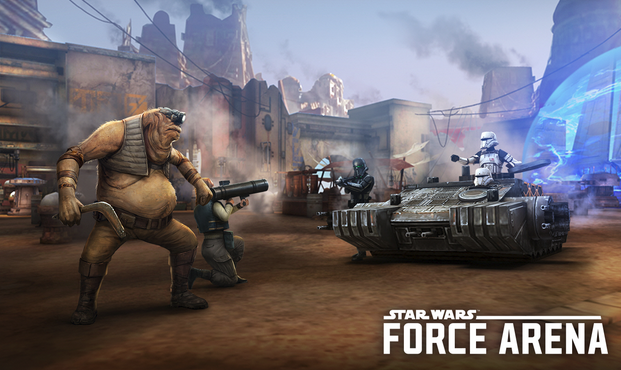