Star Wars: Battlefront II was heavily criticised for the way it allowed players to pay real money to get loot boxes that could contain items that actually affected gameplay. Some cried out that this represented a pay-to-win situation. It was a lot of bad press for EA. In response to this, EA removed microtransactions from the game completely just before its public launch, with the developer saying it needed more time to adjust them before bringing them back. Today, EA confirmed that microtransactions are coming back in April, though this time around you will only be able to purchase cosmetic items–that is, those that do not affect gameplay. Previously, EA let you pay for an opportunity to get items that gave you a theoretical advantage such as improved grenades or shields.

Before microtransactions return, however, EA is launching an update on March 21 that significantly changes how progression works. Presently, Star Cards and other items that impact gameplay, can be acquired in loot boxes–called Crates in Battlefront II–that you can unlock through normal gameplay progression. But with the new update, the only way to get Star Cards is through standard progression. “If you earn enough experience points to gain a level for that unit, you’ll receive one Skill Point that can be used to unlock or upgrade the eligible Star Card you’d like to equip,” EA said.

If you already acquired Star Cards, the good news is that you won’t lose these when the update comes out. Additionally, all of the extra heroes and weapons you already unlocked will stay with you when the patch arrives.

Regarding Crates specifically, you’ll get these in a number of ways, including logging in every day and completing the game’s various timed challenges. Crates will only include cosmetic items–such as emotes or poses–as well as Credits. 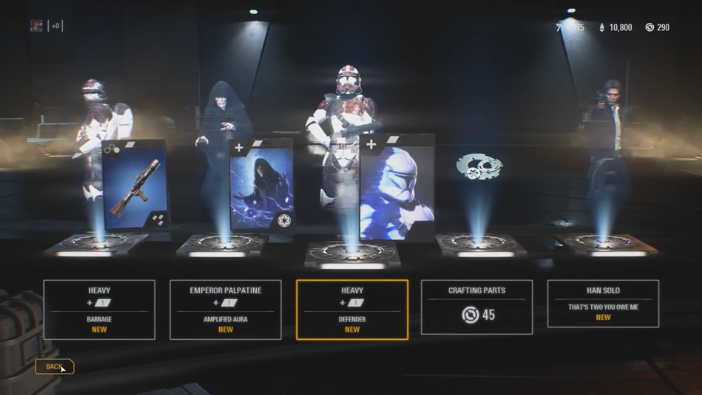