The coin design shows an engraved image of each character set against a colourful background scene from Star Wars: The Force Awakens. These impressive coins come presented in a Star Wars branded and stylized coin packaging, making them an ideal gift for any fan. 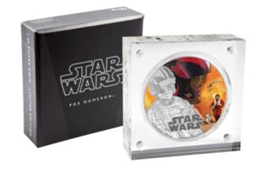 With a limited worldwide mintage of only 10,000 of each coin, don’t delay and start, or add, to your collection today.

If you are keen to be one of the first to hear about Star Wars coin releases from NZ Mint, you can find them on Facebook, Twitter or sign up here to get Star Wars coin news emailed direct to your inbox!