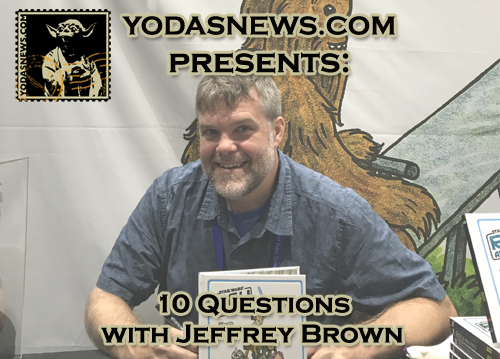 Mark: Most of our readers know you from Star Wars: Darth Vader and Son, and then the many successful books that followed, but how did you first get involved in writing Star Wars books?

Jeffrey: I grew up with Star Wars, and got my chance to draw for Lucasfilm through Google. I got a call from Ryan Germick, who runs the Google Doodle team,  and occasionally they have an outside artist contribute an image to use for the Google homepage image. Because he knew my previous autobiographical work about awkward everyday moments and my humorous sci fi comics, he thought I’d be a good artist for their idea to portray Vader and Luke in a normal life situation like shopping for groceries. My son was four years old at the time, so I made Luke four and put Vader in my shoes as a parent. Google liked my sketches, but decided to not use the concept. I took the pitch to Chronicle Books, who published my cat books, and also works with Lucasfilm. Chronicle took the project to them, and Lucasfilm liked it enough for us to turn it into that first book.

M: What or Who was the main influence on your style, which is known around the world now?

J: I don’t think I could point to one influence – I think everything I read and see has some influence, so lots of newspaper comics, comic books, and graphic novels – but also music, movies, sketch comedy, and fine art. The biggest influence may be German expressionism, and artists like Charlotte Salomon. My style has become more refined over time but I try to keep that sense of feeling and emotion and immediacy in my drawing.

M: We ask this of everyone in this feature, what is your favorite Star Wars film?

J: The Empire Strikes Back is still my favorite, followed closely by A New Hope.

M: Have you ever had the chance to visit Skywalker Ranch or meet the man himself, George Lucas?

J: I hope to meet George Lucas someday, but haven’t had the opportunity so far. I have gotten to visit Skywalker Ranch a couple times, though. The last visit was especially  meaningful as I  was able to see the archives, and they happened to have a big stack of McQuarrie concept paintings out. Those paintings were one of my artistic inspirations, so having a chance to look at them up close and in person was amazing. 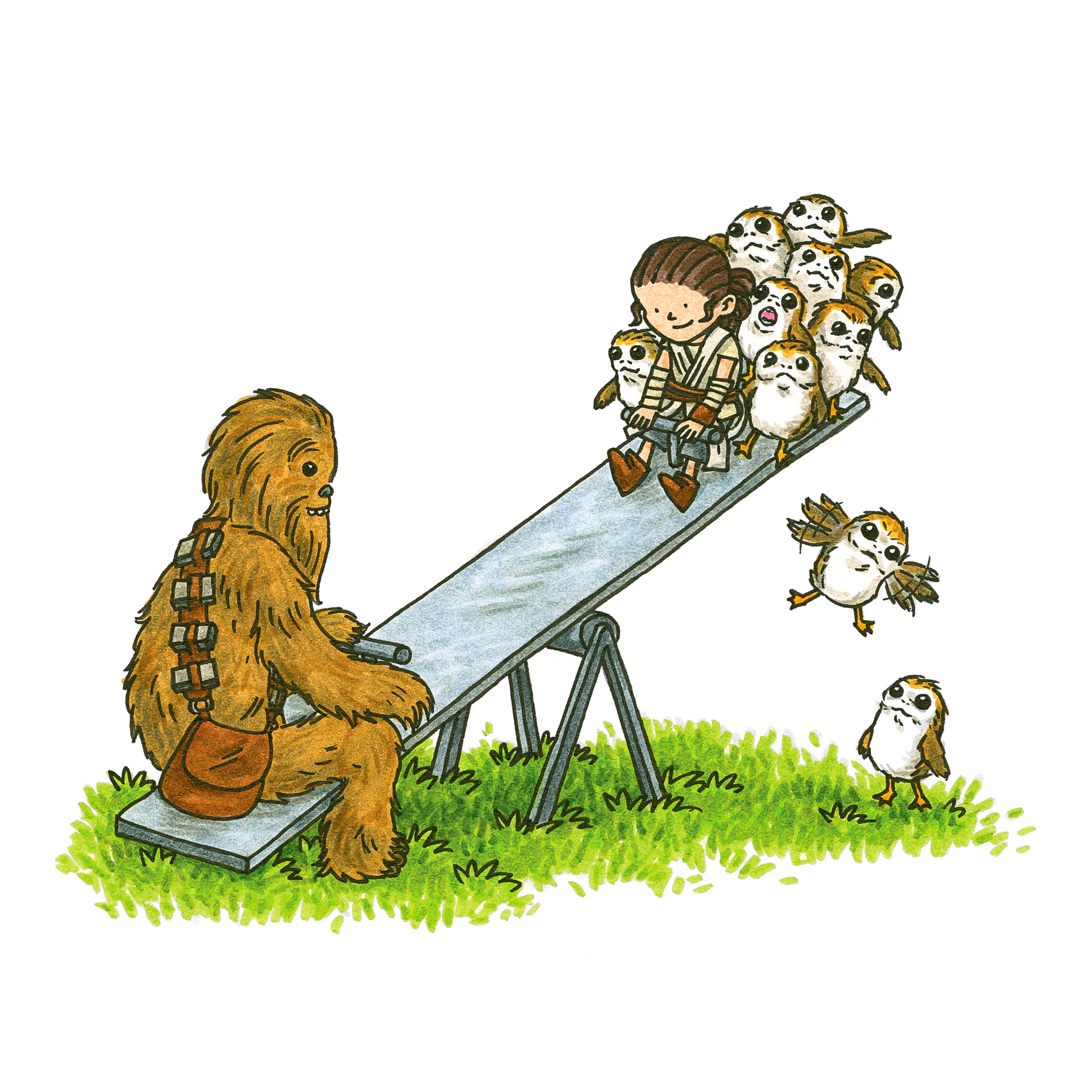 M: Rey and Pals comes out in a few weeks, we’ve been letting our fans know and the pre-orders on Amazon have been great. Do you have another book coming out soon about Star Wars?  We understand if you can’t say a name, but hopefully something in 2020?

J: I don’t have anything planned yet, but I loved Rogue One and Solo, and am looking forward to Rise of Skywalker, so I’m sure I’ll be back in a galaxy far, far away soon. In the meantime, I’m working on a new middle grade science fiction series about human and alien kids exploring the galaxy in a spaceship run by robots, the first book of which will be out next spring.

M: Your books are meant for children, but they are very popular with adult collectors, did that surprise you that so many adults would not only read your books, but collect them?

J: Actually, it was the opposite – I began writing Darth Vader and Son for people like me, who grew with Star Wars as kids and were now becoming parents themselves. I did want to keep the books kid friendly, so I didn’t make the jokes too mature, because I thought parents might show a page to their child. I didn’t expect just how much kids would love the books, and how much parents would complain that their son or daughter keeps taking the book for themself!

M: You have 2 of the most popular Gentle Giant LTD statues that sell for triple what they sold for and are highly collectible when they hit the market (which is not often), any chance we will see future statues from your books? We’d like to have one from Rey and Pals!

J: Gentle Giant did an amazing job with the two Vader statues. I can only hope we get one with Rey, BB-8, and Finn!

M: With Rey and Pals, we have the book and also the journal and postcards, which make a great set.  Did you ever think of offering an exclusive deluxe set that included all 3 items, limited edition to like 100 copies and signed by you?

J: It would be up to Chronicle and Lucasfilm, but I would love that! I’ve enjoyed having special editions like the exclusive books for Darth Vader and Son and Vader’s Little Princess that came with the Gentle Giant maquettes, or the deluxe boxed sets of the four Vader and family books.

M: If you could write one dream book and have it published, on any subject, what would it be?

J: Drawing Star Wars was my biggest childhood dream, so being able to make all of these books was already a dream. The other thing I’d like to do is work with the works of Tolkien. As a kid I drew a lot of pictures based on The Hobbit and The Lord of the Rings, so even if it was getting a chance to draw for the Tolkien calendar, it would be another dream come true.

M:  Lastly, knowing you have so many adult fans, have you ever thought of writing or illustrating a Star Wars book meant for adults?

J: Sometimes I think about writing a Star Wars story that’s more adult, but I love humor and like making books that everyone can read. One of the great things about A New Hope is that it’s a movie for adults, but it’s also for kids – it has a sense of magic and wonder that is good for any age, and I like that.

Huge thanks to Jeffrey Brown for taking the time to talk with us, check out his new book, journal and postcards for pre-order at this link, coming out on 8/20/2019! 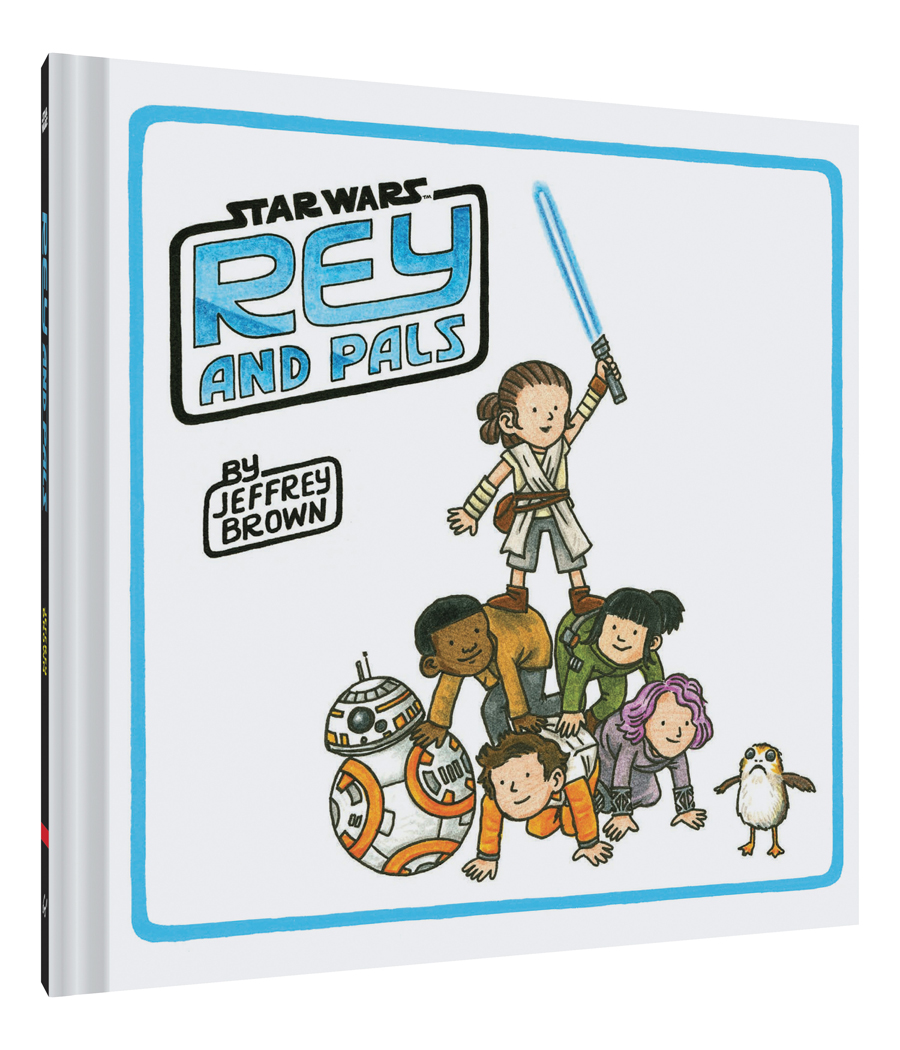