MASTERS OF THE UNIVERSE HE-MAN 1/6 SCALE FIGURE – He-Man, the first in the Masters of the Universe 1/6 scale figure line by Mondo, features over 30 points of articulation and a fabric costume elements with lots of accessories. By the Power of Grayskull, you too can have the Power! $159.99

THE EMPIRE STRIKES BACK PRINCESS LEIA 1/6 SCALE COLLECTIBLE FIGURE – Hot Toys is delighted to present the new 1/6th scale collectible figure of Princess Leia in the gown she wore in Cloud City as the latest addition Star Wars collectible for our fans! $204.99

STAR WARS DARTH VADER CLAPPER – The Clapper joins forces with Star Wars! Let the power of The Force control your appliances, and hear the voice of Darth Vader himself! Plug a lamp or other device into the Clapper and turn it on and off with a simple clap of your hands. You’ll hear a Darth Vader quote each time to indicate your command has been received. $32.99 Each 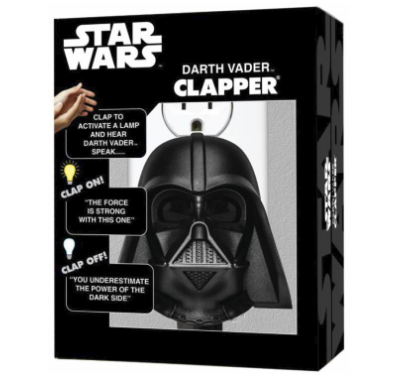