Empire’s End satisfactorily finishes what Chuck Wendig began over two years ago with the Aftermath Trilogy as part of the Journey to the Force Awakens publishing campaign. I was a bit let down by the first book Aftermath, but I loved the second book Life Debt. Empire’s End for me fits right in the middle. The novel does a good job providing closure to our rebellious band led by Norra Wexley and their quest for the Empire’s demise. Overall, the book left me satisfied.

The story begins shortly where Life Debt left off, with Norra Wexley and her battle-hardened crew living up to their reputation of imperial VIP hunters. In the wake of the attack on Chandrila, Norra has a voracious drive to find Rae Sloane and punish her for what she has done both to the New Republic but also to her husband, Brentin. She eventually picks up on Sloane’s trail and closes in for the final confrontation. All the while Sloane and Brenton Wexley have made an unlikely alliance to chase down and punish the puppet master, Gallius Rax, for manipulating them to fit into his sinister plans. And on top of everything, the New Republic works through political subterfuge to locate and destroy the remnant of imperial forces in an effort to eradicate its footprint on the galaxy. All of these pursuits culminate on and around the planet of Jakku in a heart-racing finale that effectively closes the door on one chapter just as it opens the door on a new chapter upon which the new film trilogy is built.

The events in this book were exactly what I was hoping for when I opened the first book in the trilogy. Now after reading the entire story, and learning how the story on Akiva, and later on Kashyyk and Chandrilla paved the way for the culminating events on Jakku, my experience feels complete (which is a feeling I was hoping for but did not get after reading Aftermath).

I’ve complained a bit about the writing style of Wendig in the past, and my complaints mostly remain after reading Empire’s End. The introspection of the characters is mostly shallow and predictable, and far too often ends in a question like, “but he knew that would happen, didn’t he?” Not sure why, but that got old for me real fast. Also, some of the “cameos” are too obvious an attempt to link the novel to the other canon. For example, I caught mention of U-wing transports and TIE strikers that seemed to obvious of an attempt to play off of the new ships in the Rogue One film. Also a few of the characters seemed to lack any significant character development arc. One in particular that may be the most shallow character of any book I’ve read is Jom Barell, the specforce trooper that plays the meathead war jockey stereotype to a “t.”

My absolute favorite part of this book and the series as a whole, however, is the development of Rae Sloane. I’ve been intrigued by Sloane ever since meeting her on her first assignment as Star Destroyer captain in A New Dawn. Sloane is one of those enemies that is easy to root for, not unlike ISB Agent Kallus from the Rebels TV series. Seeing her grow in the imperial ranks with her fervent loyalty to the Empire and her unquestionable belief in its role to bring peace and prosperity to the galaxy is strangely satisfying. The culmination of her story, and her confrontation with Gallius Rax was nothing short of incredible.

Empire’s End does a great job setting the stage for the events in The Force Awakens. It plants the seeds for the birth of the First Order. It also plants the seeds to the political dissent that eventually pushes Leia Organa to have to operate her rogue military operation outside the official jurisdiction of the New Republic. And even though I had a small hope when I started the novel, I’m glad that it didn’t quite answer the big ticket questions like, “Who is Snoke?” and “What happened to Luke?” It answered enough questions to get me along until The Last Jedi later this year. I recommend this book and this series to any Star Wars fan!

Click Here or the image below to pick this up via digital, audio or physical form.  We would like to thank Del Rey/Penguin Random House for providing the review sample. 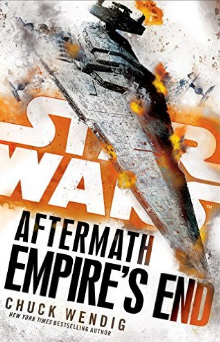