At  D23 Expo Japan presentation at (where else?) Tokyo Disney Resort, Disney Parks and Resorts may not have revealed a tidal wave of new announcements – as the division did at the American counterpart’s event last July – but it still decided to unveil a series of smaller-yet-still-exciting details regarding its biggest and most-visited theme park resort, Walt Disney World.

Let’s dive into all the Star Wars, Marvel, and Mickey Mouse updates, shall we?

Although Disney only officially unveiled the first-of-its-kind on-site (and in-park) hotel last summer, rumors and speculation long preceded the reveal, giving us an idea regarding the new luxury resort’s placement, specifically, and what kind of experience it would provide guests, generally. Tonight, we have official confirmation on it all.

Expect the Star Wars Hotel to connect directly to Star Wars: Galaxy’s Edge, the new theme-park land that is due to open sometime next year (probably late summer). Yes, that’s right – the venue will technically reside on Hollywood Studios property proper, as we fully expected, making it a first for Disney World. Even better, the company is promising that visitors’ real-life role-playing will commence as soon as they enter the building: “Guests immediately become active citizens of the galaxy and can dress up in the proper attire.” (Don’t worry – just as with Galaxy’s Edge itself, if you don’t wish to play a particular character, you won’t have to.) And just to serve as the cherry on top, Disney has also announced that every one of the hotel’s rooms will feature a window view directly into space, sealing the illusion that you’re on a starcruiser departing Earth and making its way to Batuu, the ancient trading-port planet that Galaxy’s Edge is located on.

As exciting as the Star Wars-themed hotel is, there’s another part of Galaxy’s Edge that has gotten our little nerd hearts a-patter: the exclusive merchandise.

Before the advent of Universal Orlando Resort’s Wizarding World of Harry Potter – Diagon Alley, such a preoccupation would’ve seemed aberrant; now, however, having seen what the theme-park maestros have come up with to further immerse us in our favorite sagas – especially after getting our hands on what Walt Disney Imagineering managed to cook up for Pandora: The World of Avatar – getting that same kind of detailed love for Star Wars is easily one of the most-anticipated parts of the new land for us.

So far, the only store to be officially revealed is Toydarian Wares, which will provide “hand-crafted” keepsakes from that galaxy far, far away (and presided over by a presumably-audio-animatronic Toydarian, which makes the whole experience somehow even cooler). Tonight, thanks to D23 Expo Japan, we’ve gotten the first glimpses at what these toys will look like – as well as confirmation that the storefront will be themed to look and feel like a “street market.” 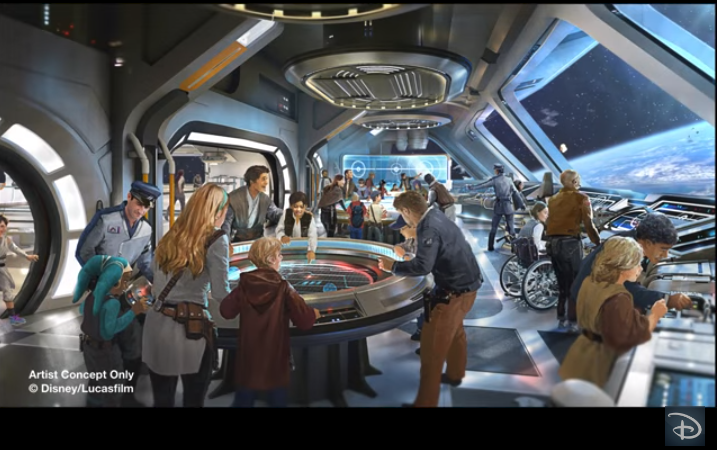