In 1997, Star Wars fans were delivered the Special Edition of the original trilogy, allowing them to witness the iconic films with the best sound and visual effects imaginable, while also introducing a new generation of audiences to the galaxy far, far away. While most fans appreciated the technological updates, the films also featured a handful of narrative tweaks that differed from the original films in ways that were difficult to overlook. In the years since those Special Editions were released, George Lucas continued to tweak the films for various home video releases, though a special event over the weekend hosted by the Academy of Motion Picture Arts and Sciences featured an original 70mm print of Star Wars: A New Hope along with Rogue One: A Star Wars Story.

“I just got to see Star Wars projected from an immaculate 70mm print,” one viewer tweeted about the experience. “The original Star Wars, pre-special edition (‘A New Hope’ was on the crawl, but otherwise unaltered). It’s an impossible dream come true, and I’m so extremely grateful for this opportunity.” 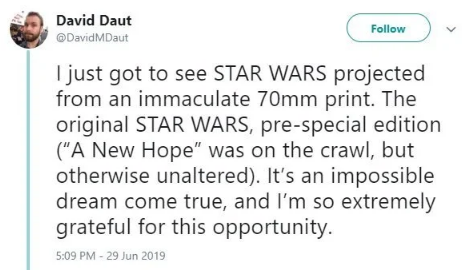