Perhaps the force is strong with this one.

A jewelry maker in Japan on Wednesday put on display a mask of Darth Vader covered in gold leaf ahead of the release of its new Star Wars memorabilia that will go on sale next month.

The new items by Ginza Tanaka jeweler will include ‘koban’ style Japanese coins made of real gold. Five gram coins with a silhouette of Darth Vader will be sold for approximately ¥65,000 ($544) each, according to the company.

A Ginza Tanaka spokesman said the gold mask was originally created in 2014. The mask is not for sale, and he declined to reveal how much it costs.

The coins will go on sale on May 4 to celebrate the new Star Wars film, which will open worldwide in December.

Last year Ginza Tanaka created a 15-kilogram statue of Godzilla made from pure gold to celebrate the monster’s 60th anniversary. 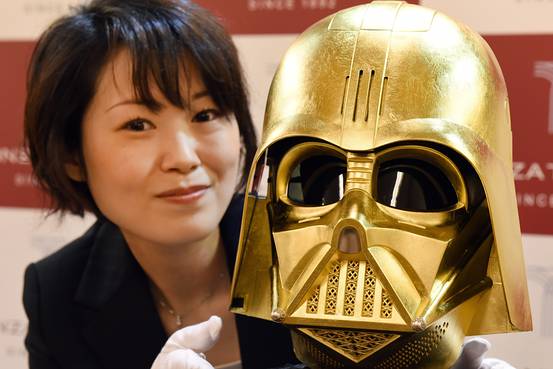