A real-life Star War is taking shape. Luke Skywalker himself, Mark Hamill, is using the force to get his “Star Wars” co-star Carrie Fisher a star along the Hollywood Walk of Fame — the force of fans, that is.

Hamill asked fans on Twitter on Tuesday to campaign for Fisher — who passed away in 2016 — to receive the honor early, in time for the release of “Star Wars Episode IX” next year. The posthumous rule is a five-year wait to receive a star, but Hamill thinks that with enough support, the Hollywood Chamber of Commerce could make an exception.

“Carrie WILL get her well-deserved Star on the Walk of Fame, it’s only a matter of when,” Hamill wrote. “The rule is a 5-year wait when awarded posthumously. A letter to the Hollywood Chamber of Commerce wouldn’t hurt, urging them to time it to the release of #EpIX.” 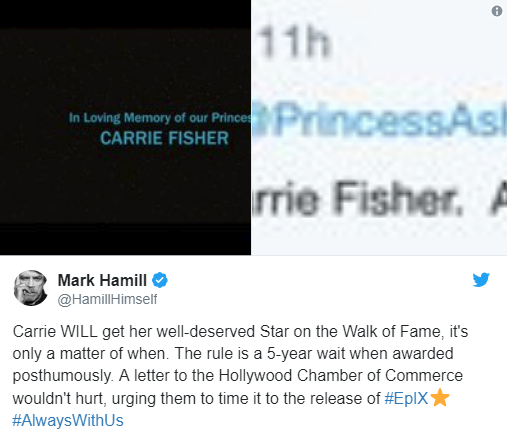