New renderings and details about the Star Wars-themed lands coming to both Walt Disney World and Disneyland were revealed at a panel discussion at Star Wars Celebration in Orlando.

The creative minds from both Disney Imagineering and Lucasfilm came together on stage at the Orange County Convention Center for the panel titled, “Star Wars and Disney Parks: A Galaxy in the Making.” Included on the panel were Disney executives Scott Trowbridge, Wendy Anderson, Asa Kalama and Chris Beatty as well as Lucasfilm creative executive Pablo Hidalgo and film designer Doug Chiang who has worked on four “Star Wars” films.

The six creative personalities shared details about the back story of the new Star Wars land as well as some of the experiences that will be available when it opens in 2019.

When it opens, the 14-acre area at Disney’s Hollywood Studios, as well as its counterpart in California, will take guests into a new planet in the Star Wars universe.

Click here or below for the full story by Richard Tribou at orlandosentinel.com 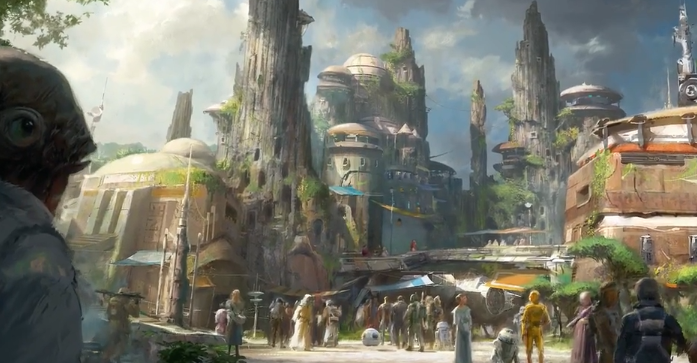