There are a number of things we’ve come to expect from Star Wars movies. We know we’ll see droids, spaceships, lightsabers, desert planets, at least one person talking about the Force, and at least one other person saying, “I have a bad feeling about this.” But George Lucas also created a distinct style when he made his original Star Wars trilogy, turning things like opening crawls, soundtrack fanfares, and wipe transitions into the series’s own visual language.

Now, Lucas isn’t directing any of the films in the new trilogy, but the directors of each are all attempting to re-create Lucas’s visual style. Rian Johnson, who just directed Star Wars: The Last Jedi, opening this December, revealed this week that, to his chagrin, his film only features 12 of the Star Wars series’s characteristic wipe transitions. A wipe transition is a type of scene transition in which the opening shot of the next scene appears as if it’s unrolled on top of the closing shot of the previous one.

Johnson revealed the number of wipes his new film has after hosting a Twitter poll, in which he asked his followers to answer which Star Wars movie they thought had the highest number of wipes. As it turns out, Star Wars: The Phantom Menace has the most, with 55. The Empire Strikes Back has 42, A New Hope has 31, and The Force Awakens, which kicked off the new trilogy, only has 14.

A wipe transition has become something of an in-joke with Star Wars fans. Now that we’ve come to expect them in every movie, it’s more fun when there aren’t as many. Johnson no doubt knows how to make those 12 wipes count. 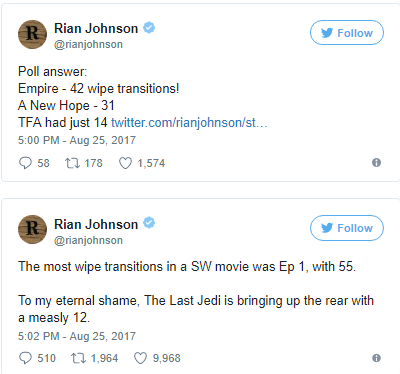