These days it’s generally assumed that anything in movies beyond the norm of reality — and even then, some of the humdrum stuff too — is achieved via CG. But that’s certainly not the case, as Star Wars: The Last Jedi’s special effects supervisor Chris Corbould could tell you. From Force-destroyed huts to scores of falling bombs and beyond, many of the effects in The Last Jedi were created the good old-fashioned practical way.

On the occasion of The Last Jedi’s release on Blu-ray, DVD and Digital, I spoke to Corbould — who has worked on everything from The Dark Knight to a bunch of James Bond movies to The Who’s rock opera Tommy. He broke down some of the secrets of his trade…

Attack of the Hut
No, not Jabba the Hutt. We’re talking about the hut on Ahch-To that is decimated by Luke when he interrupts Rey and Kylo Ren’s Force-convo. Corbould explained that, amazingly, the disintegration of the hut was accomplished through practical effects in camera.

“I think what we did do, which you’ll probably think was visual effects — there’s a scene where Luke Skywalker comes into his hut while Rey is having the big talk with Kylo Ren, and all of a sudden the whole hut blows backwards away from him,” he said. “We did that practically. So I was very, very pleased with that. We put the whole hut together like a big jigsaw, and then we attached a wire to every single individual piece. And then, on a cue, on a button, all those individual pieces were connected to pneumatic jerk rams, which jerked them all out in different directions.”

TWO STARWARS.COM WRITERS DEBATE WHICH SCENE SPEAKS TO THEM MOST.

One of the great things about Star Wars is that it inspires endless debates and opinions on a wide array of topics. Best bounty hunter? Most powerful Jedi? Does Salacious Crumb have the best haircut in the saga? In that spirit, StarWars.com presents From a Certain Point of View: a series of point-counterpoints on some of the biggest — and most fun — Star Wars issues. In this installment, two StarWars.com writers discuss which scene from Star Wars: The Last Jedi stands above the rest. 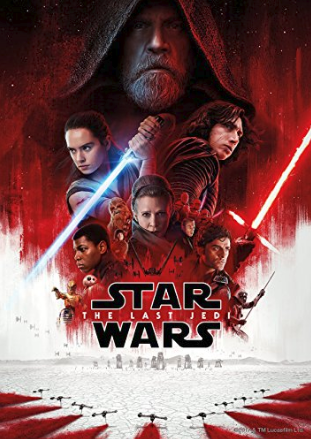 THE DIRECTOR OFFERS INSIGHTS ON EVERYTHING FROM PORGS TO “PEW!”

Star Wars: The Last Jedi arrived on Digital and Movies Anywhere last week and is coming to 4K Ultra HD, Blu-ray, and On-Demand on March 27, and one of the many features packed onto this release is a director’s commentary from Rian Johnson. In the commentary, he reveals quite a bit about what went into the making of the film. Here are seven things we learned — though you’re really going to watch the whole thing, because you’ll find more gold than Snoke’s robe in there.

The Star Wars franchise is perhaps best known for its plethora of memorable characters, but part of the magic of watching the movies is getting transported to the galaxy far, far away. Over 40 years, the films have taken viewers to the deserts of Tatooine, the swamps of Dagobah, and the forests of Endor. The Last Jedi features some of the most stunning locations the saga has seen, with Ahch-To and Canto Bight standing apart from anything else in the series. It was a Herculean task to bring director Rian Johnson’s vision to life, but the incredible crew made it work and delivered something the fans have never seen.

Screen Rant got an opportunity to interview Episode VIII production designer Rick Heinrichs about how the earlier movies influenced his designs and what it was like working with Johnson.

Screen Rant: Following The Force Awakens with this one, how did the production design on Episode VII influence your work on Episode VIII?

Rick Heinrichs: That’s a good question. I think both Rick Carter and Darren Gilford on Episode VII, as well as myself on VIII, we were really trying to look back to the original trilogy for inspiration. I spent several days up at Skywalker Ranch going through all their folders of Ralph McQuarrie’s original drawings and Joe Johnston drawings – all of that. And, it was just so humbling to see the mountain of work that had been done. Now, on 7, Doug Chiang was very much involved with, I think a lot of the development of that as well. And, he’s got the DNA in him. So, really we were kind of drawing from similar sources for a lot of this, and trying to make sure that it felt organic to the series and that people were going to see familiar elements, but also that they’re gonna feel they’re in a new story and that the design was evolving. And that it felt exciting and current for them, too.

The big handoff from number 7 for us was the island of Skellig off the coast of Ireland, which is Ahch-To. Rick had found that. And it was just barely reachable for us. They went there for a couple of days when they were shooting there, and we found it likewise to be a challenge. It’s one of those places where you approach it with a boat and the boat is rising and falling eight feet at the docks and you have to sort of time your drop off – your hop off onto the deck. But I’d already seen a lot of photographs of it, and felt like I’d already been there. So, actually seeing it in person was both familiar and an awesome experience. What we did was essentially develop and evolve the look and feel of Ahch-To, both using Skellig and then a number of locations on the west coast of Ireland to augment and develop what that island was – all of the different environments. There was the Temple, the village, there’s the library tree. There’s a Caretaker village that you never see in the film, but I think you might see it on the DVD.