Last week, Disney announced the home release date for Rogue One: A Star Wars Story. The film will be available on Digital HD March 24 and Blu-ray/DVD on April 4.  To hype fans up, they also released a home release trailer:

While many fans praised the packaging for Rogue One’s home release, some pointed out something wrong in its cover art.

If you look at the cover art closely, you’ll notice the TIE fighters are shooting out red lasers when they’re supposed to be shooting out green lasers. That may seem like a simple mistake but it’s a huge deal for many Star Wars fans. How did this mistake even get approved in the first place? There’s a chance that the red lasers are being shot at by X-Wings, but that’s unlikely since it’s out of frame and that all other ships are shooting forward. Even if the TIE Fighters on the top were being fired at, the one on the bottom would still be in question due to the fact that it’s emerging from where the blast is triggered, and that there’s no parallel laser beside it.

So what do you think about this mistake? Do you think that the designers of its cover art intended the red lasers to come out from the X-Wings and not the TIE Fighters? 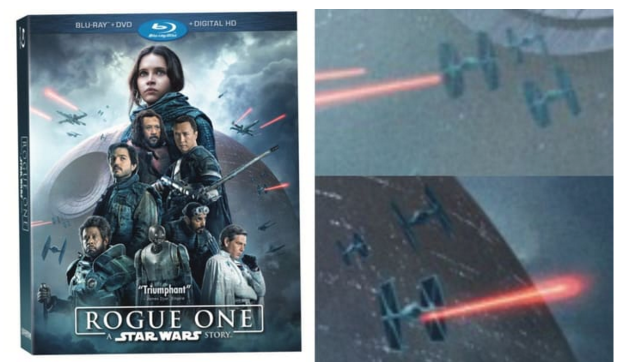