The screenwriter, who salvaged the ‘Star Wars’ project, says the situation was so dire, “all you could do was improve their position.”

Tony Gilroy is getting candid for the first time about his emergency trip to the Star Wars galaxy.

In June 2016, Lucasfilm hired the Oscar-nominated writer to rework Rogue One: A Star Wars Story after the studio was unsatisfied by the state of director Gareth Edwards’ movie. By August, he was taking a leading role in postproduction and oversaw reshoots to fix a few issues, including the film’s ending. Gilroy ultimately was paid millions for his work, and many consider him the film’s ghost director.

Gilroy had not spoken publicly about Rogue One until Monday’s appearance on The Moment With Brian Koppelman podcast, where he noted that he immediately saw ways to improve the movie when he came on the scene in London.

“If you look at Rogue, all the difficulty with Rogue, all the confusion of it … and all the mess, and in the end when you get in there, it’s actually very, very simple to solve,” Gilroy said of the film. “Because you sort of go, ‘This is a movie where, folks, just look. Everyone is going to die.’ So it’s a movie about sacrifice.”

He saw the opportunity to explore why the film’s characters — played by stars Felicity Jones, Diego Luna and Donnie Yen — would ultimately sacrifice themselves at the end of the film in order to allow the Rebels to gain the plans to the Death Star.

Choosing his words carefully, Gilroy signaled how much of the project was changed after he boarded. (Star Ben Mendelsohn has said “an enormously different” version of the film exists.)

“I came in after the director’s cut. I have a screenplay credit in the arbitration that was easily won,” said Gilroy.

Unlike lifelong fans like Star Wars: The Last Jedi’s Rian Johnson, Gilroy was not a fan of the franchise before boarding and therefore had no trepidation about potentially messing it up.

“I’ve never been interested in Star Wars, ever. So I had no reverence for it whatsoever. I was unafraid about that,” said Gilroy. “And they were in such a swamp … they were in so much terrible, terrible trouble that all you could do was improve their position.”

Rogue One debuted to strong reviews (85 percent on Rotten Tomatoes) and earned more than $1 billion at the global box office, but Gilroy doesn’t have plans to return to a galaxy far, far away.

“It doesn’t appeal to me,” he said of making another Star Wars film. “But I don’t think Rogue really is a Star Wars movie in many ways. To me, it’s a Battle of Britain movie.”

Thanks to Tom for the report, while it last, pick  up the Funko Rogue One – Combat Assault Tank Trooper Summer Convention Exclusive for just $4.99 at WalMart.com!  Click below to grab one (or a few, would make great donations to Toys For Tots) while they last! 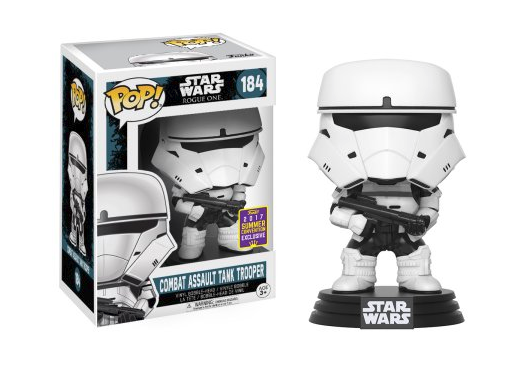 Call a friend and then click here and add TWO Rogue One RC Rapid Fire Imperial AT-ACT to your cart at GameStop.com, and they will come up for $149.99 for the two (see below) 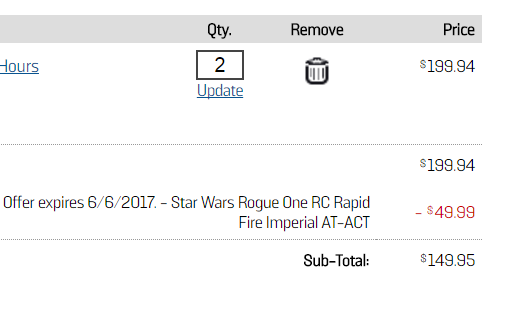 Or, you can get one for $99 – Online or Order Online for In store pickup.  Click Here or below while they last! 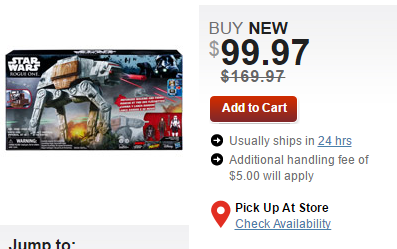 Before Disney purchased Lucasfilm, there was hardly any worry about leaks and rumors ruining stories in the Star Wars Universe.

The internet didn’t have as big of a presence as it does now and all of the story beats were kept by one man: George Lucas himself.

But now there is a whole story group of writers and multiple filmmakers and different media across multiple companies—there’s a lot of room for loose lips. But Lucasfilm has since established protocol to keep key details under wraps.

Rogue One: A Star Wars Story screenwriter Gary Whitta recently revealed some details during a spotlight panel at Salt Lake Comic Con’s FanX 2017 (via the Good Men Project), illustrating the many different precautions Lucasfilm takes when dealing with creative aspects of future films.

“Working for Lucasfilm is like working for the CIA,” Whitta revealed.

In the quest for not just likeness but “life-ness,” key members of the Star Wars effects team said new ground was broken but no ethical lines crossed when they digitally revived deceased actor Peter Cushing to create Governor Tarkin in the 2016 spinoff movie Rogue One.

“I think this was a very non-controversial case,” said John Knoll, chief creative officer and senior visual effects supervisor at the effects company founded by George Lucas, Industrial Light & Magic. Agreed Hal Hickel, animation supervisor at ILM, “I thought it was fine. We were doing things that were very true to the character, and having him do what he did in the original film: standing in the Death Star talking about blowing things up.”

The pair, along with Skywalker Sound supervising sound editor and sound designer Matthew Wood, drew many oohs and ahhs during a deconstruction of key effects sequences in Rogue One: A Star Wars Story at this week’s NAB Show in Las Vegas. The film has taken in more than $1 billion at the worldwide box office since its release last December. Industrial Light & Magic’s visual effects supervisor John Knoll has been telling stories in the “Star Wars” universe for many years, though typically in segments and pieces, providing some of the prequel saga’s most lavish and eye-popping FX. But the tale of “Rogue One” was, from the outset, entirely his brainchild.

Beyond his “Star Wars” bonafides, Knoll has the unique distinction of co-creating Photoshop with his brother Thomas and has garnered multiple Academy Awards nominations for his work on some of the biggest FX-driven film franchises of the past quarter century, including the “Star Wars” prequel trilogy, “Avatar,” “Star Trek: First Contact,” “Mission Impossible: Ghost Protocol,” “Pacific Rim” and his Oscar-winning work on “Pirates of the Caribbean: Dead Man’s Chest.”

But George Lucas’ galaxy far, far away has always held a special place in his heart, ever since his youth. So when a possible plot for a new series of standalone films set in the rich universe kept percolating in Knoll’s head, he found himself suddenly driven lending his creative vision to the beginning, middle and end of a “Star Wars” story, as he related to CBR during a visit to ILM’s San Francisco headquarters to promote the Blu-ray release of “Rogue One.”

CBR: When did the very first glimmers of the idea for the story for “Rogue One” start formulating in your brain, and how quickly did it go from daydream concept to a full-fledged notion to you crossing over from your FX work and saying “I’m a storyteller, and have to get the story told somehow.”

John Knoll: It’s longer than you might think — it was nine years. The first inklings of trying to tell that story happened in Summer 2003 when we were shooting on “Episode III” in Sydney. I had heard that Lucasfilm was developing stories for a potential live action TV series, and they were active in story development at the time. That was kind of intriguing, and I started thinking about, “What would be a fun thing to do as a one-hour episode as a live action ‘Star Wars’ TV show?”

One thought was, “What about a ‘Mission Impossible’-style break-in into the most secure facility in the Empire to steal the Death Star plans? There could be a lot of tension of potentially being discovered and overcoming security measures. That could be a lot of fun!” I started tinkering with this idea internally. Then a day or two later, I asked Rick [McCallum], I heard you were developing this TV show. He started telling me about the era that it takes place in, and the themes of the show. As soon as he started going into that, I realized, actually, that idea has no place in that show, so I just dropped it completely.

It wasn’t until Kathy [Kennedy] announced this new slate of “Star Wars” films that, in addition to “VII,” “VIII” and “IX” that would be continuing the saga, that she also wanted to do these standalone adventure stories: stories that took place in the “Star Wars” universe but weren’t necessarily connected to that through-line. A lot of us were really intrigued by it. “That sounds like fun.” I thought that idea of the mission to steal the Death Star plans, telling that story could make a pretty good standalone feature as well.