Thanks to YN Reader Pete for the heads ups, via dailymail.co.uk:

Royal Mail has revealed the final set of stamps in its own Star Wars-themed collection. The 16-stamp set will mark next month’s release of Star Wars: The Rise Of Skywalker, and features characters and vehicles from the Skywalker saga.

All ten character stamps are exclusive illustrations by digital artist and Star Wars fan Malcolm Tween. Philip Parker, of Royal Mail, said: ‘Once again Malcolm Tween takes us on a journey across the Star Wars galaxy with extraordinary artwork of characters old and new.

‘The stamps are miniature masterpieces and a fitting tribute to mark the end of the Skywalker saga.’ The stamps will be available from November 26. 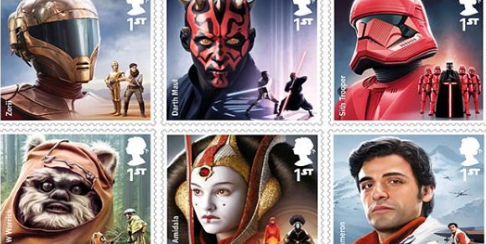