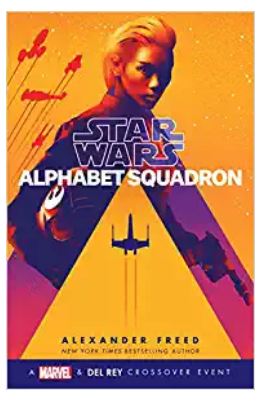 Disney is at it again, using the full might of its resources to produce more thrilling content for the Star Wars Universe. Star Wars: Alphabet Squadron is the latest novel, which is a companion to the Star Wars: TIE Fighter comic series which was released earlier in April, 2019.

Alphabet Squadron is the first novel in a trilogy, set shortly after the destruction of the second Death Star. Emperor Palpatine was prepared for the possibility of his demise, and enacted Operation Cinder as part of his contingency plan. Initially detailed in the Star Wars: Battlefront II novel and video game, Operation Cinder was designed to initiate the brutal destruction of multiple worlds.

The novel follows Imperial defector, Yrica Quell, who is tasked by new republic intelligence to bring down the infamous 204th, her former TIE fighter squadron. Together, with a rag-tag group of pilots, all with their own ships and vendettas against the empire, they are put to the test against their formidable foes.

Star Wars: Alphabet Squadron definitely feels like a sequel to Alexander Freed’s earlier novel, Battlefront: Twilight Company. The novel feels more like a war-time novel than a Star Wars novel. While it adds a unique perspective to the behind-the-scenes tactics and brutality of the war effort, it lacks some of the Star Wars magic.

What made Twilight Company great was the fact that it preceded the launch of the first Battlefront video game. It was fun to play the game after reading the novel and re-enact some of the scenarios from the novel. The problem with Alphabet Squadron is that there is no upcoming video game (that I know of) exclusively featuring dogfighting in the Star Wars universe. As a stand-alone novel it is interesting and provides some additional perspective in the time between the events of Episode VI and The Battle of Jakku. But ultimately, it is superfluous to Star Wars as a whole.

One of the redeeming features of the novel was the cameo of Hera Syndulla, the beloved Twi’lek pilot and leader from A New Dawn, the Rebels animated series, and a host of other canon media. Seeing Hera as a general, leading a squadron on strategic objectives for the New Republic was very rewarding.

In summary, Star Wars: Alphabet Squadron was an enjoyable read, especially for those who enjoy novels about tactics and military operations and leadership. However, it is about middle of the pack when compared to the entirety of the Star Wars Canon.