EA and DICE have been quiet about Star Wars Battlefront since E3 2014, when we got our first glimpse of the revival in the Frostbite Engine 3 — and while it’ll be a bit before we finally see the multiplayer shooter in action, IGN is excited to reveal this gorgeous piece of concept art.

The imagery features a pair of Rebels, a woman with a standard blaster, and a man with a scoped rifle, flanking a pair of Stormtroopers – one with his rifle at the ready, the other priming a Thermal Detonator – as the forest moon of Endor burns in the background.

In the distance, behind the Empire’s AT-ST, we get a glimpse of Ewok villages in the trees, hopefully indicating verticality in DICE’s map design. A defeated AT-ST sits smoking in the woods. Perhaps this suggests destroyed vehicles remain on Star Wars Battlefront’s battlefields. 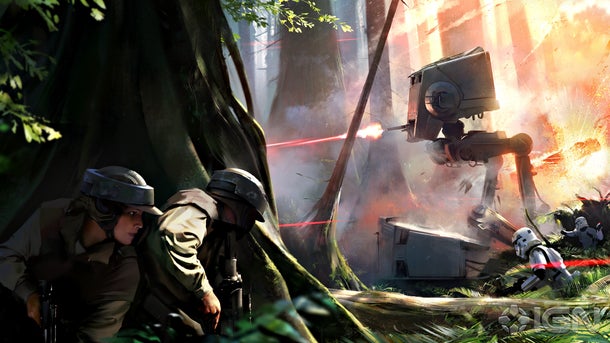