A new report, courtesy of Production Weekly, is claiming that the series will officially enter production in October 2019. This news comes nearly a month after it was revealed that The Americans producer Stephen Schiff had been set as the showrunner for the forthcoming Star Wars series.

Currently, the only thing we know about the Cassian Andor series is that it’ll serve as a prequel series to Rogue One. Actor Diego Luna, who is set to reprise his role as the titular character, is just as in the dark as fans, noting that he was only informed of the project shortly before the news hit the press.

“I know as much as you know. That thing they sent to the press? I got that the day before,” he said in November, following the series announcement. All that is known is that the series will be focus on “tales filled with espionage and daring missions to restore hope to a galaxy in the grip of a ruthless Empire.”

Given the secrecy that surrounded Favreau’s The Mandalorian, even well into production, it’s highly doubtful we’ll learn much else prior to the production’s reported October start. 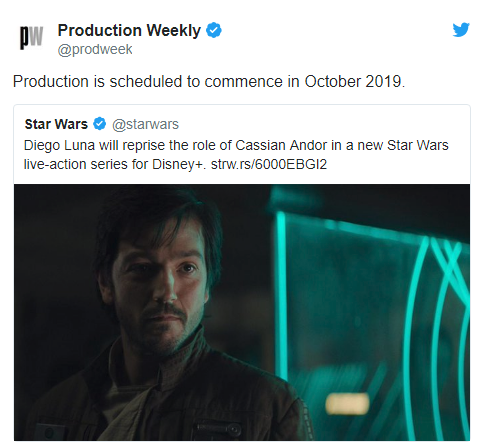