The Free to Play real time strategy (RTS) game Star Wars Commander has been released for the IOS and is available for both iPhones and iPads.  Details on the game:

Charge into battle on distant planets, and lead your troops to victory in this action-packed, combat strategy game! Build a base, recruit an unstoppable force, and challenge players across the Star Wars universe in Star Wars™: Commander!

During a time of Galactic Civil War, competing forces need allies for their cause. The Rebellion rallies for justice and freedom, while the Empire seeks control of the galaxy. Where does your allegiance lie? Will you side with the Empire’s strength and relentlessness, or the Rebellion’s heroism and resourcefulness? The choice is yours!

Rise through the ranks as a powerful battlefield commander in this exciting game of strategy and competitive galactic combat!

Click the image below to check out more on the game at the iTunes store. 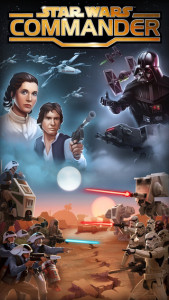