New gifts given to the crew that worked on Star Wars: Episode IX tease new plot details for the upcoming movie. The Star Wars saga began in 1977 when George Lucas released the very first movie set in a galaxy far, far away. Now in 2019, fans have seen a prequel trilogy, Star Wars spinoffs, and are now eagerly awaiting the conclusion to the sequel trilogy.

J.J. Abrams is known for being incredibly secretive when it comes to details about his upcoming films. Since Star Wars: The Force Awakens was such a massive project, Disney and Abrams did everything they could to prevent leaks and spoilers from reaching the public. Rian Johnson, director of Star Wars: The Last Jedi, had his own tactics for preventing leaks, and it looks like things won’t be any different for Star Wars: Episode IX. So far, not a lot of information has been released for the film, but new plot details may have just been revealed through gifts that the crew received.

In a new post on the Star Wars Leaks Reddit page, user N00tN00t84 shared an image of a gift set that crew members working on Star Wars: Episode IX supposedly received from director Abrams. As seen in the screenshot below, the gifts include a Bad Robot jacket, as well as two bottles that are filled with some sort of sand and beans. The note attached to the sand bottle says, “From a long long time ago, not so far away” and the note on the bean bottle says, “Swallows you up whole!!”. There is no telling what exactly these two bottles mean, but a Reddit user that seems to have inside knowledge commented, “So for those asking about the bottles: The sand, and it is really fine sand is from a sacred place on a familiar planet. The beans are something to do with ‘a Jedi eater’ whatever that means”. With that in mind, these comments should be taken with a grain of salt since they come from an unverified source. 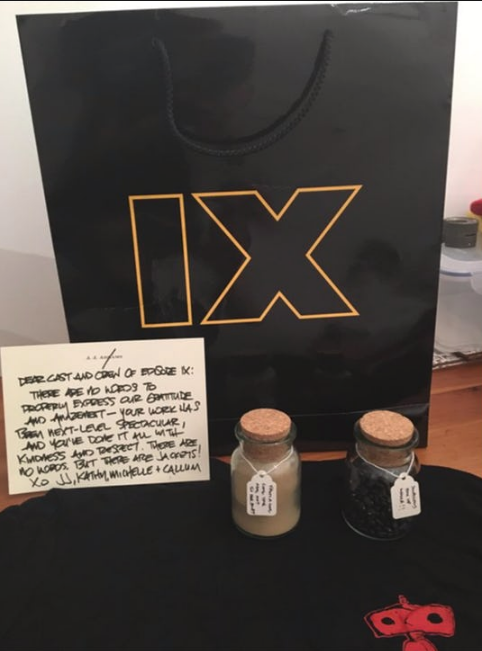