Delilah Dawson’s new novel, Star Wars: Galaxy’s Edge Black Spire was recently released as the third novel in the collection featuring Black Spire Outpost on the planet Batuu. Disney has invested heavily in the planet in its theme parks, so it’s no wonder Star Wars is publishing novels that feature the planet to build on the hype.

The novel is set after The Last Jedi and presumably before, but possibly concurrent with, The Rise Of Skywalker. Using her great foresight, General Leia Organa sends one of her best spies, Vi Moradi, to prepare an Outer Regions refuge for the Resistance to use to regroup and lick its wounds.

Vi is accompanied by recent First Order defector, Captain Cardinal, now known as Archex. Vi and Archex have a complicated history, he having tortured her before his defection, and she having rescued him from Captain Phasma after his betrayal of the First Order

After getting off to a rough start on the planet, Vi and Archex begin the work of recruiting and rebuilding. If only it were that easy. After a short time, the First Order tracks Vi and Archex to the remote outpost. Now all VI has to do is figure out how to repel the First Order without alerting them to the growing Resistance presence on the planet.

This novel was VERY refreshing after reading Galaxy’s Edge Crash Of Fate. Where the prior novel had little to do with the Star Wars storyline, this novel ties in wonderfully.

I believe a primary reason that The Last Jedi was so controversial is the ending. Fans were left feeling confused and hopeless as they watched the pitiful remainder of the Resistance pile onto the Falcon, narrowly escaping with their lives. While this certainly isn’t the first time the “good guys” get pummeled in Star Wars, it felt like the most hopeless.

Galaxy’s Edge Black Spire shines a ray of hope that The Resistance can and will rebuild so it can continue…well… resisting. It also confirms Batuu’s strategic role in The Rise Of Skywalker. While the novel didn’t really feature any of the famous heros, it portrayed several new characters that we can only hope will end up on screen.

It’s hard to say without seeing The Rise of Skywalker yet, but I believe this novel is a must read to set the stage for the upcoming movie. It certainly has changed my attitude towards Black Spire Outpost, and has given me renewed excitement for the final installment in the Skywalker Saga.

Click Here or the image below to pick this up.  We would like to thank Disney Lucasfilm Press/Penguin Random House Audio for providing the review sample. 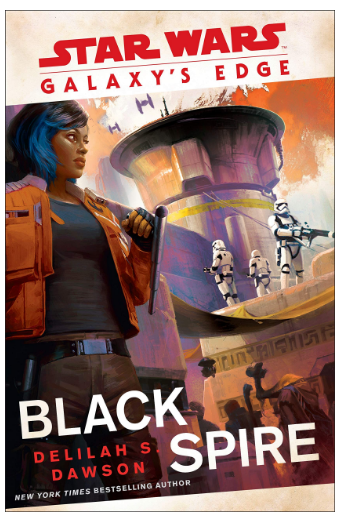