Star Wars: Poe Dameron Free Fall, the newest addition to the Star Wars Canon, hit shelves in early August. Poe Dameron captured fans’ attention with his lead role in the new film trilogy, in several novels, and his own comic series. But until now, the story of Poe’s history of being a spice runner with Zorri Bliss on Kijimi remained untold.

Most fans will remember the comical exchange in The Rise Of Skywalker when Finn discovers how Poe knows to do all the “shifty stuff” like lightspeed skipping and speeder hot-wiring. On Kijimi, after meeting Zorri Bliss, Poe’s friends are surprised and shocked to learn he used to be, as Finn dubbed him, “Poe Dameron: Runner of Spice.” Poe Dameron Free Fall finally provides some answers about how the son of two heroes of the Rebellion became entangled with the Spice Runners of Kijimi, and somehow escaped that world to become the leader of The Resistance.

The story begins on Yavin IV, where Poe lives a rural life of relative boredom with his widower father. Craving excitement, and acting just as impulsively as he did in the films, Poe seizes an opportunity to pilot a stranded group of smugglers off Yavin IV. Not being one to think things through, Poe quickly realizes his new life with the spice runners isn’t one he can so easily walk away from. And after becoming enamoured with Zorri Bliss, he’s not so sure he wants to leave anyway.

The infamy surrounding the Spice Runners of Kijimi, however, isn’t a facade. As Poe’s affiliation with the group deepens, so does his visibility into the deplorable acts the group performs in order to retain its power. The problem is, his guilt caused by his complicity in these acts grows at about the same rate as his affinity toward Zorri. Is he willing to sacrifice his morals to be together with the one person in the universe he truly connects with? Or is he willing to sever the connection with Zorri in order to do what he knows in his heart is right?

One of the most challenging obstacles that Alex Segura faced when writing this novel was satisfactorily providing a plausible explanation for Poe’s involvement with the spice runners. Poe was certainly rough around the edges when we first met him in The Force Awakens, but we immediately latched onto his good heart. And in the Poe Dameron comics, we learned that his parents were both very influential leaders in the Rebel Alliance. How could one with such a legacy completely turn his back on it. Yet, despite the challenge, Segura effectively provided a realistic, believable story as to how Poe could descend so far from his legacy and still ascend so high in the Resistance.

On another note, the novel included several other key explanations that enhanced my overall understanding of the Star Wars Universe. For example, the novel explained lightspeed skipping in a way that makes a lot more sense than was portrayed in the film. Basically, it requires having previously entered a series of precise coordinates for locations that are difficult to navigate. The pilot, being able to anticipate the upcoming obstacles, gains the advantage in the effort to evade pursuers.

In summary, this novel masterfully provided additional backstory and details that enhanced my overall Star Wars experience. From the start, Poe was one of my favorite characters in the new trilogy. I thoroughly enjoyed learning more about him and his story. I definitely recommend this novel for all Star Wars fans.”

We want to thank Disney Lucasfilm Press for providing this sample for review. Click below to pick this up today! 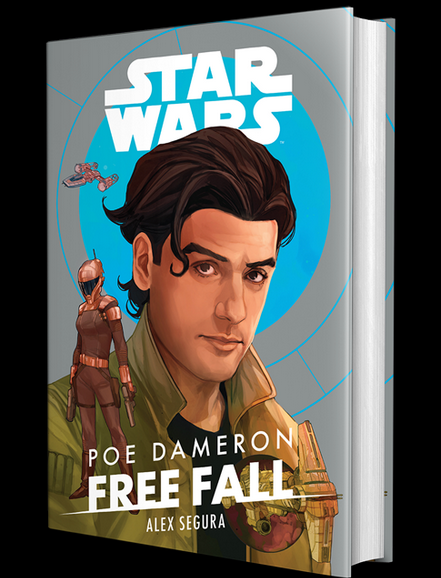