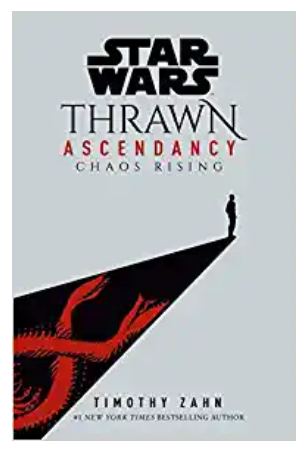 I’ll begin this review the same way I’ve begun my reviews for the previous Thrawn Trilogy. If you are reading this review to decide whether to read Thrawn Ascendancy Chaos Rising, let me save you some time. Stop reading this review immediately, go grab a copy, and read it. There are no caveats or conditions. This novel is simply a must-read for any and every Star Wars fan. Really, it’s that good.

Thrawn Ascendancy Chaos Rising is the first book in the newly announced trilogy by none other than Timothy Zahn. As a reminder, Zahn originally created the Thrawn character as part of his original trilogy consisting of the novels Heir To The Empire, Dark Force Rising, & The Last Command. Soon after this trilogy was relegated to “Legends” status due to the introduction of the new Canon, Fans were thrilled to learn that Zahn was tasked to reintroduce Thrawn into the official canon. While Zahn’s first canon trilogy presented the backstory about how Thrawn became a Grand Admiral in the Galactic Empire, this trilogy steps back to tell the tale of how Thrawn originally became a leader in the Chiss Ascendancy.

The main events of the novel are set sometime during the Clone Wars era, many years prior to Thrawn being introduced to the Empire. Thrawn has begun to climb the ranks in the Chiss Expansionary Defense Fleet, earning himself the attention from both critics and admirers through his unique and effective, though often misunderstood, military tactics. He, together with one of his greatest admirers Admiral Ar’alani, begin to see patterns of an encroaching threat to the Chiss Ascendancy. Through a series of missions involving piracy investigations, skirmishes with alien forces, and even some espionage, Thrawn becomes convinced that the threat is real and must be stopped.

While Thrawn’s military genius is certainly suitable to handle the impending confrontation, his political ineptitude proves to be a recurring, significant obstacle to his success. And to make matters worse, the current situation bears resemblance to a situation in Thrawn’s earlier career where his political ineptitude led to a devastating failure that nearly ended his career and put the entire Ascendancy at risk. Not only does this failure plague Thrawn, but his critics also haven’t forgotten about the time Thrawn was wrong in a significant way. If Thrawn and his allies can’t win the trust of the Chiss leadership in time, action against the impending threat may be too little, too late.

There is so much to love about Zahn’s approach and style in this novel. SImilar to his previous novels, Zahn masterfully alternated between two separate timelines, progressively interweaving them until they both climaxed during the culminating events of the novel. It is such an artistic and unique way to tell a story. Additionally, Zahn expanded on the culture and philosophy of the Chiss in such a way that they’ve officially taken the top slot as the most badass Star Wars species in my opinion. While Thrawn is uniquely exceptional in many ways, several of the characteristics that set him apart in the Galactic Empire are native to the Chiss way of life.

Not only does Thrawn Ascendancy Chaos Rising contain a fantastic and entertaining story arc, but it basically unlocks potential for an entirely new Star Wars Saga. The Chaos in the Unknown Regions is full of new Aliens and culture, new heroes, and new threats: all the necessary ingredients for a fantastic Star Wars Story.

If I haven’t convinced you to read Thrawn Ascendancy Chaos Rising yet, let me make one final attempt. I have read every single canon novel and junior novel that has come out since Disney purchased the franchise (many of them multiple times). Some of the novels aren’t worth reading. Most of them are very enjoyable and add a considerable element to my understanding and enjoyment of the Star Wars Saga. Every Thrawn novel I’ve read remains at the top of the list. Trust me, it is worth the read. What are you waiting for?

We would like to thank Disney Lucasfilm Press/Penguin Random House Audio/Del Rey for providing the review sample. Click Here to order today!