ALDERAAN — May the Fourth and its darker counterpart Revenge of the Fifth have come and gone, but with the resurgence of interest in “Star Wars,” you can geek out over the sci-fi franchise anytime, anywhere.

Artist Randy Christ put together a replica of the TIE fighter crash from “Star Wars: Episode VII – The Force Awakens,” using plywood, styrofoam and some old pipe. He even used a shotgun to give the piece lifelike battle scars that would’ve caused the crash.

“The ‘TIE’ acronym stands for twin ion engine — which power the craft,” Christ said. “The two wings or side plates are actually solar panels to collect sunlight to power the ion engines. All of which is made up, of course.”

The TIE fighter is located one mile north of Heber, on the west side of U.S. Highway 40. Sponsored by Christ’s business, Sock City in Park City, the installation will be available for photos until early June.

The team behind the piece considered a number of other locations for the crash, and ultimately landed on one close to home. With five people constructing the installation, they got the scale model up in time to celebrate May the Fourth, also known as Star Wars Day, earlier this month.

“Since the Tie Fighter was assembled out in the north fields there’s been a lot of interest by passersby, stopping and taking photographs from Highway 40,” Christ said. “We can’t let people get too close, because it’s fragile. But they’re enjoying it nonetheless.”

He added, “The first ‘Star Wars’ film came out when I was a teenager so I have followed that story since it began. Personally I like to think of myself as part of the Rebel Alliance — not quite a Jedi, but definitely one of the good guys.”

The Alpine Garrison of the 501st Legion, (a local Star Wars cosplay and re-enactment group), plans to use the “crash site” to fundraise for groups in the Heber Valley area. 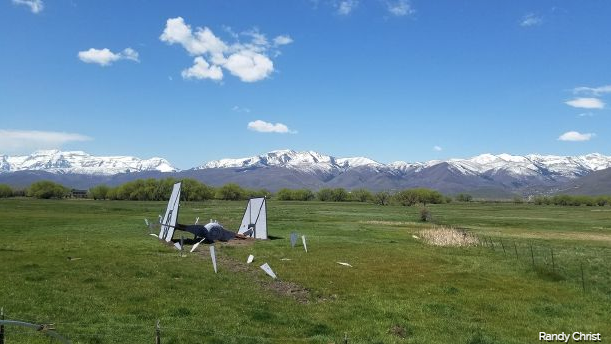