As Dragon Con 2014 approaches, press releases, like the one released today, help build up hype for one of the largest ” sci-fi conventions” in the country. Dragon Con released a statement that got the fandom excited just hours ago, “DRAGON CON SELECTS OFFICIAL 2014 LITERARY AND ARTIST GUESTS OF HONOR.” The literary guest of honor and the artist guest of honor are both highly sought after positions that show truly exemplary work in their perspective fields. 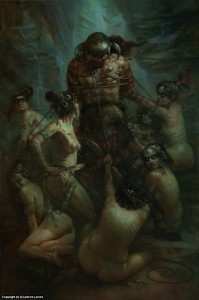 Harry Turtledove was selected for the literary position, while Patrick Jones filled the artist slot. They will be recognized during the Awards Banquet held at the end of Dragon Con. The press release spoke highly of their collective works.

The Convention Co-chair, Rachel Reeves had the following to say:

“Both Guests of Honor are widely renowned in their respective fields and recognized as endlessly creative individuals. They will be recognized at the Guests of Honor Awards Banquet on Aug. 30.Year after year, we continue to support artists and writers whose works best exemplifies pop culture, fantasy or sci-fi themed work. Patrick Jones breathes brilliant fantasy into the human anatomy through imagination and a paint brush.With the increasing popularity of alternative history, Harry Turtledove was chosen as our Literary Guest of Honor for his popular tales that take readers to alternate worlds and immerses them in fantasy action.”

Jones, residing in Australia, is widely known for his oil paintings and has “been compared to fantasy greats Boris Vallejo and the late Frank Frazetta. His understanding of anatomy, design and lighting, best exemplified by his award-winning oil painting, Conan The Conquered, are truly excellent.” The attached image of “Conan The Conquered” is breathtaking and iconic. It is clear that someone with such talent is deserving of being awarded a guest of honor. In addition to his outstanding compositions, he also is leading the next generations of artists. He teaches many instructional workshops, passing along his knowledge to those who will succeed him. Jones has made an incalculable contribution to the science fiction community.

Turtledove, a resident of California, is a exceedingly proficient author and has even been called the “Master of Alternate History.” Those familiar with his outstanding novel, ‘Guns of the South,’ are able to appreciate his use of time travel and commentaries on social issues. He seamlessly combines both the plagues of the time and science fiction in a manner that few others could achieve. For over forty year, Turtledove has pushed the Science Fiction genre ahead. His accomplishments include making “innovations in Science Fiction literature, equally at home writing about alien invasions or historically based epics. His many well-received series even include a disaster series based on the lava dome at Yellowstone erupting again.” His diversity, intellect, and artistic style is astounding and rightfully deserves this position as well.

It is great to see such truly talented people being honored by the Dragon Con and Science Fiction communities. Look for more information about the event, later this year. Alex Rybak, of Yoda’s News, will be attending Dragon Con as a panelist for the Star Wars track as well. This and other events will be covered here at Yoda’s News and Alex will be providing you with exclusive interviews and content. Stay tuned August 29th through September 1st for further coverage.