Star Wars fans, prepare to break out the Benjamins for a piece of history from a galaxy far, far away.

Profiles In History, considered the largest dealer of authentic pieces of Hollywood, is preparing to hold an auction in Los Angeles that will be loaded with Star Wars memorabilia, including the original lightsaber wielded by Luke Skywalker in Star Wars Episode IV: A New Hope.

The lightsaber, which was passed down from Obi-Wan Kenobi to Luke in A New Hope, is expected to bring in $150-200,00 at the auction, which will take place from December 11th through December 14th. Bidders will also be able to place bids online at the company’s website.

In a past auction, one of Luke’s lightsabers was bought $240,000, according to the Profiles In History official website, so perhaps the original model could exceed the anticipated $200,000 come next week. With the events that occurred in The Last Jedi, perhaps the demand for Luke Skywalker material is on the rise, given the fact that we may have seen Luke wield a lightsaber for the last time.

There will also be a number of other pieces of Star Wars history up for auction along with the lightsaber, most notably an original TIE fighter helmet from A New Hope, which Profiles In History expects to bring in $200-300,000. A pair of C-3PO hands from Return of the Jedi has an estimated bidding value of at least $40,000, while an Imperial Scout Trooper helmet (worn by the troops who chased Luke and Leia on Endor in Return of the Jedi) is expected to earn at least $100,000 at auction. Lastly, an original screen-used stormtrooper helmet from The Force Awakens signed by Mark Hamill, Harrison Ford, Carrie Fisher, Daisy Ridley and others will be on sale, and likely to sell for at least $80,000. 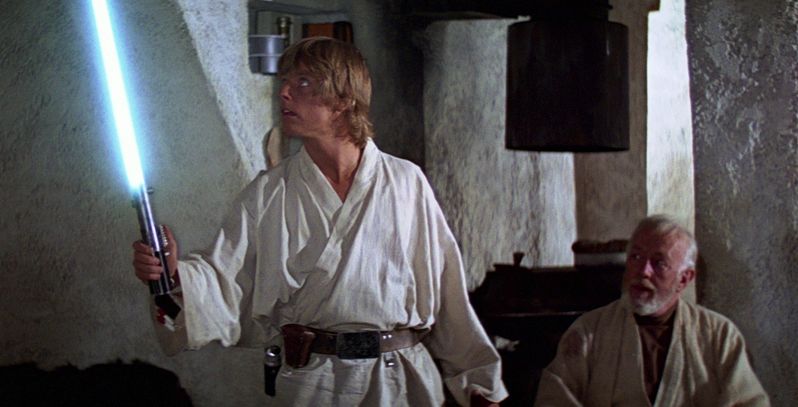