Han Solo is by far my favorite, non-Jedi Star Wars character. When I first heard that Lucasfilm was planning a film about his back story, I almost literally jumped for joy. As it has with the past several films, Disney announced several accompanying novels and young readers. I was a bit worried after reading Star Wars: Last Shot and seeing Han’s character gravely mishandled (see my review here). But all my concerns melted away when I experienced Solo: A Star Wars Story in theatres opening night.

Star Wars: Most Wanted was a fantastic companion to the film and is a worthy read for any Star Wars fan. The novel is set immediately before the beginning of Solo in the sewers beneath the ship building city of Coronet on Corellia. Han and Qi’ra are struggling to survive while they compete for position in Lady Proxima’s band of street rats, the White Worms. The previous head of the White Worms was sent on a mysterious mission and never returned, leaving an open slot of position and privilege among the gang. Han and Qi’ra are among the top contenders, and are thus rivals. Throughout the novel, Han and Qi’ra’s paths cross on a dangerous adventure in the Corellian underbelly. They quickly learn that to survive, they must work together and learn to trust each other. This begins the budding of the relationship that we see between the two in the beginning of Solo.

Since this is a young adult novel, it is an overall quick read and the plot is relatively simple. Nevertheless, the novel does a great job developing Han and Qi’ra’s characters and providing context to their meager existence among the White Worms. Rae Carson’s passion for Star Wars pleasantly comes out throughout the text. She masterfully intertwines dialogue and themes that subtly pay homage to the rest of the franchise. Carson does a great job portraying Han as a smooth talking, confident, and instinctive leader, living as a constant contradiction to his humble circumstances. She also does a great job building Qi’ra as strategic, calculating survivor.

I heartily recommend Star Wars: Most Wanted as a great read for Star Wars fans of all ages. It is great as a stand-alone novel, but also as a companion to the Solo film.

Click Here or the image below to pick this up via digital, audio or physical form.  We would like to thank Disney Lucasfilm Press/Penguin Random House Audio for providing the review sample. 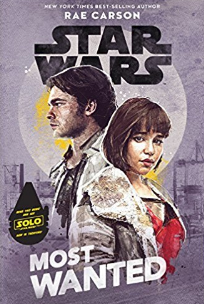