The amount of content being released in 2021 under Star Wars: The High Republic umbrella is staggering, if not a tad chaotic. Star Wars storytelling certainly hasn’t slowed down one bit after concluding The Skywalker Saga; it has simply been refocused on the “Republic Renaissance”, 200 years prior toThe Phantom Menace. However, with the release of Cavin Scott’s The Rising Storm, the strategy of the onslaught of novels, young adult novels, and junior readers is becoming a bit more clear. While several young adult novels have been released since The Light Of The Jedi (the first of the The High Republic novels), it is apparent that Scott’s latest novel is meant to be the direct sequel. Even though I haven’t seen anything that indicates this novel series is a trilogy, The Rising Storm definitely reads like “the middle book”, spending an inordinate amount of time on plot development and ending with a highly unsatisfying cliff hanger. Additionally, reading this novel without first reading The Light Of The Jedi will result in a high amount of confusion and missing context.
After having unveiled the Starlight Beacon, Chancellor Lina Soh sets her sights on the Republic’s next major step in its expansion into the Outer Rim: The Republic Fair. Soh hopes that showcasing all the Republic has to offer will attract systems that have yet to join the Republic, such as the esteemed Togrutas. But with the looming threat of the Nihil and the devastation of The Great Hyperspace Disaster fresh on everyone’s mind, controversies arise regarding the fair’s extravagance. As the Republic’s borders expand, it makes itself a bigger target. Is the Republic spreading itself too thin, accelerating expansion faster than its defenses?
The Nihi seem to think so.
Led by Marchian Ro, the Nihil plan and execute an elaborate attack on the fair, seeking to deter the Republic from expanding further into its territory. At least that’s the story Ro tells the Nihil to keep them focused on a common cause, in order to keep them distracted enough to control. The attack on the fair deals a serious blow to the expansion efforts of the Republic. Even though the Nihil were ultimately defeated and forced to retreat, the attack resulted in a feeling across the galaxy that while the Nihil are still a threat, no one is really safe. But Ro’s true intentions, though subtle, are much more sinister. The novel ends with Ro unveiling a threat that strikes fear throughout the galaxy; not only in the people, but in the Jedi themselves.
While it is interesting to explore more of this relatively new time period in Star Wars storytelling, I still find myself lacking the level of excitement and investment that I’ve felt when reading novels set in The Skywalker Saga. I think there are a few factors at play here for me that are getting in the way. First off, the Skywalker Saga is led by the films, which brings novels to life in a unique way by providing a level of visual context that anchors my imagination. The novels in The High Republic don’t have that luxury. You’d think that the novel-first approach would require more simplicity and descriptive language, but that hasn’t been my experience so far. Secondly, I’m still not sure who the main protagonists of the novels actually are; there are SO many! Combine this with the point above, and you get an experience where you feel there is too much to absorb and you are always behind.
Overall, I’m hopeful that these novels will come together in the end. Despite my criticism, I’m definitely sitting on the edge of my seat to see how this novel’s epic cliffhanger gets resolved. I definitely recommend giving The Rising Storm a read, though you must begin with The Light Of The Jedi for it to make any sense.
Click Here or the image below to pick this up via hardcover or digital audio to be released on June 29th.  We would like to thank Disney Lucasfilm Press/Penguin Random House Audio for providing the review sample. 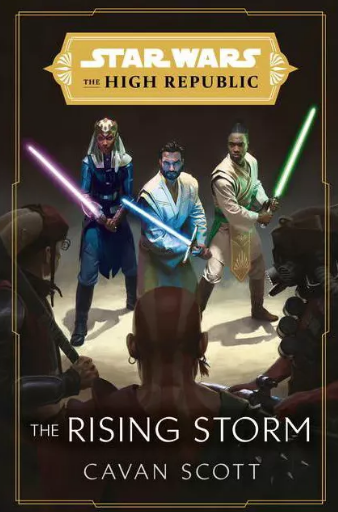