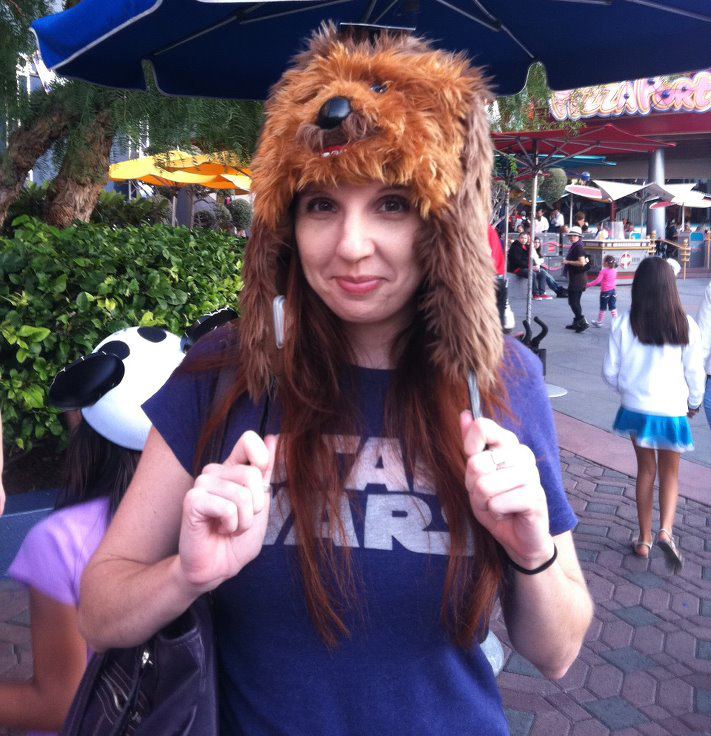 Amy Ratcliffe is a leading lady in the Star Wars Community. She is a writer for Geek with Curves (personal blog), The Official Star Wars Blog, Star Wars Insider Magazine, IGN, Nerdist, Blastoff Comics to name a few.  Today she was kind enough to site down with Chris to answer a few questions for Yodasnews.com.

Chris: What was your first experience with Star Wars? How did that experience affect you?

Amy:  I came to Star Wars later than most people I talk to. I first experienced the saga with Episode IV when it was re-released in theaters ahead of the prequel trilogy. I was – and still am – impressed by how well the film holds up. The dialogue, the world, the costumes and sets – every piece takes you out of world and time somewhere else. That is not usually the reaction I have when I see films made in the ’70s. That someone could tell such a timeless story stuck with me.

At what point did you realize you wanted to be a writer? What do you like to write about most?

I didn’t realize what I wanted to be when I grew up until my mid-late twenties. I liked writing fictional short stories for assignments in high school and college but struggled with writing anything long form. Eventually I stumbled into blogging and reporting and realized that was my home, so to speak. It will not surprise you to learn my favorite topic to write about is pop culture.

When you first starting to write seriously, did you have the desire to write for geek sites and publications? Or is that something you just eventually ended up writing about?

At first, I just wanted to write and get my words out there. I initially started by blogging about food, life, and travel, and though I enjoyed it, the subject wasn’t quite a home run for me. Then I had this very lightbulb turning on, aha moment and realized I should use writing as an outlet to discuss all the geeky things I love.

Once I started Geek with Curves, I intentionally wrote different type of posts (and always stayed professional with spelling and grammar) to build up a portfolio of sorts. I started connecting with fellow geeks and Star Wars fans on Twitter, and some of those pals ended up being editors and my writing career has developed from there.

I grew up with a twin sister who also loved Star Wars, not obsessed like me, but a big fan. So for me I always knew there were female fans out there. Did you ever have any problems growing up being a Star Wars fan? Being picked on or such things?

Since I didn’t find Star Wars until my teenage years, I wasn’t bullied on that topic. However, I was very much the girl alone in the corner with my nose buried in a book. You know the opening song in Beauty and the Beast where the townspeople think Belle is super weird because she likes to read? I felt like Belle in that regard. My appreciation for Star Trek wasn’t necessarily understood either.

I make it a point to encourage everyone to embrace his or her fandom. No one should feel ashamed for loving the stories they love. That said, I will always go out of my way to interact with younger female fans. If I see a girl wearing a R2-D2 shirt at Disney, I compliment her on it. I saw a girl around 10 wearing a handmade Sabine Wren costume at a convention this year and stopped to talk to her about her cosplay – she was clearly in love with the character. I don’t think I’m necessarily making a difference, but I know that as a kid, if an adult who likes the things I like took a second to encourage me, I would have appreciated it and felt more at home. I want to do my part and contribute to a positive, welcoming environment that overruns gatekeepers and doesn’t use phrases like “true fan.”

You were part of several panels at Star Wars Celebration Anaheim, which one was your favorite and what exclusive was a must have?

Celebration Anaheim was such a joyful blur. I was fortunate enough to sit on and attend several memorable panels, but it was hard to top The Force Awakens panel. It kicked off the convention, and I don’t think I’ll ever forget the palpable energy present in that room or the incredible emotion of watching a new teaser with thousands of other fans. It was one of the highest highs I’ve experienced in my life.

As far as exclusives, the top item on my wish list was the singing Max Rebo plush. The lines for the Celebration store were always long, and my work schedule was such that I didn’t think I’d have enough time to wait. Thankfully, two friends picked one up for me when they shopped on the first day of the convention and now I can hear “Lapti Nek” whenever I want.

When you’re at conventions with friends, what do you like to do most?

Every convention is different and it can be hard to coordinate with friends because of schedules and crowds, but whenever I can, I like to just walk the exhibit hall with pals – especially the Artists’ Alley (if there is one). We can catch up, help with rationalizing purchases, and hold each other’s stuff while we take turns picking collectibles up or trying clothes on.

What kind of Star Wars items do you like to collect? Do you have a holy grail you are still looking for?

My Star Wars collection is all over the map. I’m not a completist by any means and just buy what I like. I’m a fan of the behind the scenes and reference books, a total sucker for anything cute (those Star Tots collectibles at Celebration are perfect), and I really like the animated style maquettes. The Boushh animated maquette is a collectible I’ve been wanting for a while and will probably be my next purchase.

I have two favorite characters in the galaxy far, far away: Han Solo and Ahsoka Tano. I love Han’s devil-may-care attitude, and his confident but casual approach to life is something I’d like to channel. I’m also impressed with how the character evolved over the original trilogy. And as a huge fan of Star Wars: The Clone Wars, Ahsoka just means a lot to me. She became so much more than just Anakin’s Padawan and really grew up and found her own path. I’m thrilled she’s back in Star Wars Rebels.

My favorite Star Wars film is The Empire Strikes Back, no question. The middle chapter is packed with so many moments important to the evolution of the saga and also, tauntauns.

I have two tattoos myself, have you added any new Star Wars Ink since your Rebel symbol?

My Rebel Alliance tattoo is my only Star Wars one at the moment, but I’m planning to add a X-wing silhouette to my left wrist next. I hope to have that in the next month. I’m also strongly considering the Star Wars Rebels phoenix symbol.