There are a lot of scary things in Star Wars — from surprise mynock jump-scares to realizing that the most terrifying person in the galaxy is also your dad. And most people would probably give the award for Most Terrifying Person in the Galaxy to the Emperor’s right-hand man, the Dark Lord of the Sith, Darth Vader. He’s fearsome in that tall, black armor, scary with that breathing, and frightening with his “sorcerer’s ways” — the power of the dark side of the Force. So what could frighten one of the biggest bad guys? Writer and illustrator Adam Rex tackles that tough question in Are You Scared, Darth Vader?, an enchanting new book from Disney-Lucasfilm Press, out today. Rex has been delighting audiences with his artwork and stories for years, and now he has brought his talent to the galaxy far, far away. Via email, he has shared his take on Darth Vader, and the nature of fear, for StarWars.com. 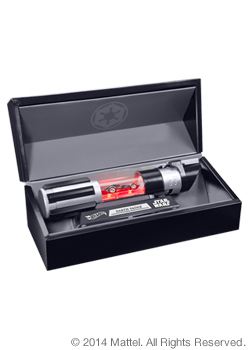 Prepare to take a ride on the dark side with the FIRST EVER Hot Wheels® Star Wars™ vehicle, modeled after one of the most iconic villains in film history – Darth Vader™!

What better way to display your 1:64-scale die-cast car (with real rubber tires) than inside Vader’s lightsaber, complete with red glowing lights, lightsaber sounds and heavy breathing from the Sith Lord himself. You won’t want to miss out on this epic Comic-Con item – it’s unlike any across the galaxy!MattyCollector.com Voucher Sale 6/23 Before SDCC, pre-order at MattyCollector.com and pick up ONLY at San Diego Comic-Con:

You must be 18 or older to purchase this product.