Via Gizmodo.com:
Star Wars occupies a huge place in the history of science fiction and fantasy. The first movie, in 1977, changed the genre forever. And this year marks the first new Star Wars film in a decade, with revamped continuity. So now’s the perfect time for a refresher course. Here’s our easy-to-read guide to Star Wars.

Welcome to the Gizmodo Guide series, where we write simple but comprehensive guides to the most important universe of science fiction and fantasy. These guides are aimed at lay-people in search of a quick refresher, as well as seasoned fans who want to debate the meaning and essential knowledge of a subject.

The first trilogy of Star Wars films came out from 1977 to 1983, and they represented a huge advance in visual effects as well as a strong focus on thrills over slow majesty. Most science fiction films in the years before Star Wars were either post-apocalyptic or slow and serious. Writer-director George Lucas had just tried and failed to buy the rights to pulp space hero Flash Gordon, and he spent years creating his own saga, workshopping his script with Francis Ford Coppola and other directors.

The first Star Wars movie is actually built around an advance in weapons engineering: The fascistic Empire, which rules the galaxy, has developed a super-weapon called the Death Star, and the anti-imperial Rebels have gotten the secret plans to it, which reveal a single weakness. In the end, the key to destroying the Death Star comes from the film’s young hero, Luke Skywalker, who has developed his mystical powers to the point where he can shoot blindfolded. In this way the film’s coming-of-age saga winds up dovetailing with its central espionage plot.

Part of the appeal of Star Wars, in fact, comes from its mixing of genres, from epic fantasy to war drama to space opera. Lucas aggressively borrowed from everywhere, but the result wound up being distinctive enough that generations of creators, in turn, borrowed from Star Wars. 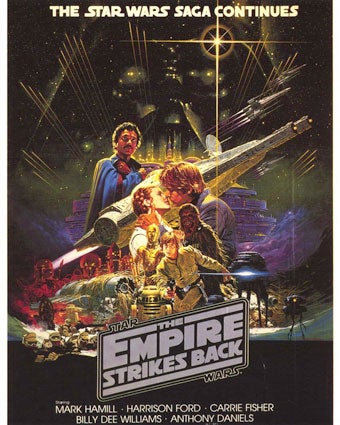