Star Wars: Victory’s Price is the third and final novel released in Alexander Freed’s Alphabet Squadron trilogy. This highly anticipated novel finally works to resolve the cliff hangers readers were left with in the previous novel, Shadow Fall.
The state of affairs for Alphabet Squadron is dire. Every time they’ve engaged the elite Imperial 204th Fighter Wing, known as “Shadow Wing” they’ve suffered heavy losses while inflicting significantly less damage than hoped. Twice they’ve kept Shadow Wing from completing its destructive mission, but just barely. The revelation of Yrica Quell’s complicity in Operation Cinder ultimately pushed her to abandon her squadron and reunite with her old mentor, Soran Keize, leaving Alphabet Squadron fractured.
The novel is set very shortly after the events in Shadow Fall, shortly before and concurrent with the battle of Jakku, the final showdown between the New Republic and the Imperial Remnant. General Hera Syndulla commands the newly acquired and reconstituted star destroyer, The Deliverance, with Wyl Lark in command of its fighter squadrons. Syndulla is on a mission to rid the galaxy of the threat of Shadow Wing once and for all, especially since it’s launched a new wave of Operation Cinder leaving destroyed and uninhabitable planets in its wake. Receiving mysterious, but welcome transmissions about Shadow Wing’s whereabouts, Syndulla and Lark are hot on the trail trying to finally catch Shadow Wing off guard.
Quell’s loyalty is in question at every turn as she slides into an advisor role for the new leader of the 204th. Keize begins to share with her his reservations about the Empire’s objectives after Endor. With the new wave of Operation Cinder targeting less-loyal Imperial factions, Keize began to question the logistics of the late emperor’s contingency plan. How many Sentinel Droids were sent to deliver the Emperor’s message beyond the grave? How did the droids choose which commanders to entrust with the message and which to exclude? With the final confrontation at Jakku looming, Keize’s search for answers to these questions fuels a personal mission to attack the heart of the Emperor’s malice.
One of the original allures of the trilogy for me was the concept of all of my favorite starfighters forming a single, unique unit. While it was thrilling in the first novel to see these fighters work together, the squadron fighting as a whole was non-existent in Victory’s Price.This definitely was a bit of a let-down. But Alexander Freed makes up for it in delivering captivating character development, particularly with Yrica Quell and Soran Keize. Additionally, Freed does a great job of not holding back punches when diving into the brutality, spontaneity, and chaos of war. The novel’s name focuses on one of its central themes: there are no true victors in war, because even victory comes at a nearly intolerable price.
This final novel solidified for me the suspicion that Freed secretly wishes he were part of an elite Tie Fighter squadron. The respect and reference he shows for Shadow Wing throughout the novel creates a level of confusing empathy, and even nods to Karl Jung’s Shadow psychology, begging the reader to ask the question, “If I were in their shoes, would I have acted any differently?” Of all the recurring jokes about stormtroopers incompetence and terrible aim, Freed presented an Imperial unit that I frankly would be proud to be a part of. Frankly, I wouldn’t be surprised if the idea for the novel came from watching this fan-made video featuring the Empire’s navy functioning at its best.
All in all, Star Wars: Victory’s Price is definitely a worthy read for all Star Wars fans. If you are looking for a novel about your favorite Star Wars characters, or lightsaber battles between Jedi and Sith, this probably isn’t the novel for you. However, pick this novel up if you want to explore the moral ambiguity of war within a Star Wars context, or experience larger-scale strategy and tactics between New Republic and elite Imperial forces.
Thanks to Disney Lucasfilm Press for the review sample.
Click Here or below for the lowest price via Amazon.com 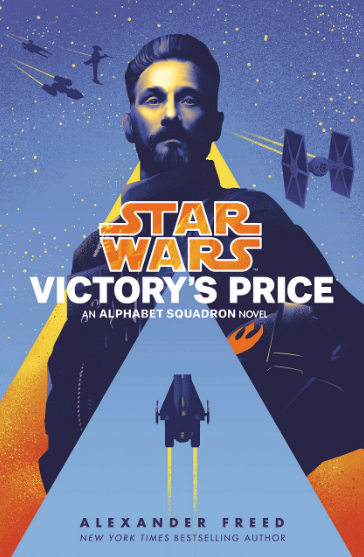