It’s only March and already the third novel of The High Republic series has been released. In December 2020, Disney announced a staggering list of new Star Wars media that will be debuting over the next few years. While many of the new projects continue to explore the Skywalker Saga, The High Republic series is the first to branch into a completely new timeline of the Star Wars universe.
Just as exciting as the continuation of the story itself is the story teller: Claudia Gray. Gray’s previous Star Wars novels are consistently at the top of my list, only rivaled by the Thrawn series from Timothy Zahn. Among her many accomplishments are Lost Stars, the novel that tells the story of the original trilogy through the perspective of ‘Romeo and Juliet’ star-crossed lovers, and Master And Apprentice, the novel that explores the original Jedi prophecies and the backstory of Qui-Gon Jinn, Obi-Wan Kenobi, and Count Dooku.
The novel is set concurrent with its two predecessors, more than 200 years before The Phantom Menace when The Republic was at its height. During an era of peace, prosperity, and progress, the Galactic Republic, in close partnership with the Jedi Order, works to expand its influence across the frontiers of the galaxy into the Outer Rim. In a grand gesture of unity, peace, and collaboration, The Republic is about to unveil the Starlight Beacon to the galaxy. The first of its kind, the massive space station was built to extend all of what’s best about the republic into the Outer Rim worlds, including the largest contingent of Jedi outside of Coruscant.
Padawan Reath Silas is among the first of the Jedi contingent sent from Coruscant to Starlight Beacon. Their trip, however, is cut short due to the Great ‘Legacy Run’ Disaster (detailed in The High Republic: Light of the Jedi). Stranded with several other ships in the same predicament, they come upon an old and mysterious space station with ties to the Amaxine Warriors. They use the station as a hub to allocate resources among the stranded vessels and hole up until they receive word that hyperspace travel is safe again. But Silas and his Jedi companions are put to the test dealing with high tensions among the stranded travelers, investigating the growing threat of the Nihil, and confronting the awakening of a foreboding presence perhaps more sinister than all other threats combined.
My review could be summed up with the colloquialism: third time’s a charm. In my opinion, the first two novels of The High Republic series failed to really excite me about this new era of Star Wars story-telling. However, Gray’s Into The Dark has finally set the stage for a story-telling era that can rival The Skywalker Saga. Not only did this novel elaborate on the growing galactic threat posed by the Nihil, but introduced a whole new galactic threat at least as sinister and possibly more so. Additionally, Gray breathed life into a few very interesting new Jedi characters: Reeth Silas, Dez Ryden, Orla Jareni, and Cohmac Vitus. I actually felt like I got to know these characters and am excited to see their continued arc in future stories. I didn’t really feel that way about any of the characters in the first two novels of The High Republic series.
I ended my review of The High Republic: Light Of The Jedi with a wish, “here’s to hoping that the following novels can provide a bit more sustenance.” Into The Dark completely delivered on that wish. This was a fantastically written novel! I am now on the edge of my seat to consume more of the story about how the Republic and the Jedi Order at their height dealt with the rising sinister opposing forces, threatening their expansion and stability.
Thanks to Disney Lucasfilm Press for the review sample.
Click Here or below for the lowest price via Amazon.com 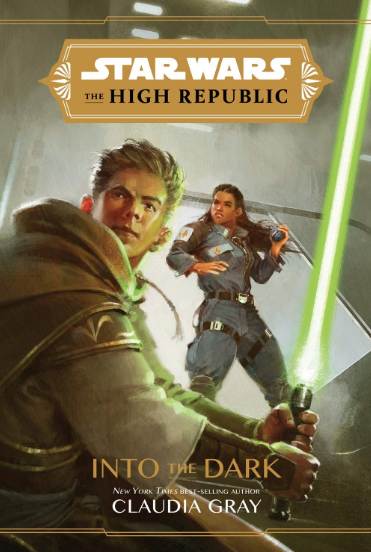