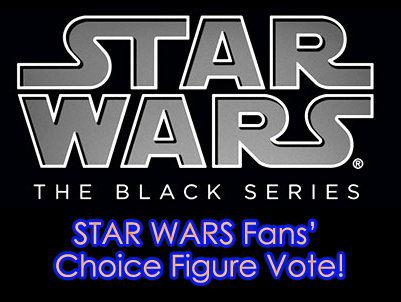 Starting today, send in your nominees for the Fans’ Choice poll to us via e-mail at  yodasnewsfanchoice@gmail.com. Our votes will help determine a character to be included in Hasbro’s STAR WARS: THE BLACK SERIES 6-inch action figure line in the near future!

Voting will end on June 29th 2015 at 10pm EST, so be sure to email us by then! Our top 6 list will then be sent off to Hasbro to be included with other participating fan sites! All polling result lists will be combined and weighed equally, with the #1 character on each list worth 6 points, the #2 character worth 5 points, the #3 worth 4 points, etc.

The resultant point values will be used to generate the final ballot of 6 choices, which will be launched at 9 am PST on July 2 on StarWars.com. The winning character will be announced at Hasbro’s STAR WARS panel, July 10 at Comic-Con International in San Diego.

Thanks for taking part in this historic Fans’ Choice poll for STAR WARS: THE BLACK SERIES!