LEARN DETAILS ON THE STORY OF IDEN VERSIO, SEE NEW SCREENSHOTS, AND MUCH MORE.

The Lucasfilm Story Group’s Steve Blank and actress Janina Gavankar made a special appearance today at D23’s “Level Up! The Walt Disney Company’s Video Game Showcase,” discussing the beyond-highly-anticipated Star Wars Battlefront II. In its ambitious single-player campaign, the game follow’s Gavankar’s Iden Versio, commander of the Empire’s elite Inferno Squad, in a story picking up right after the destruction of the second Death Star. With Star Wars Battlefront II‘s November 17 release getting ever closer, Blank and Gavankar pulled back the curtain just a little bit on what we can expect. Here are seven highlights from their discussion — and some new screenshots, video, and more. 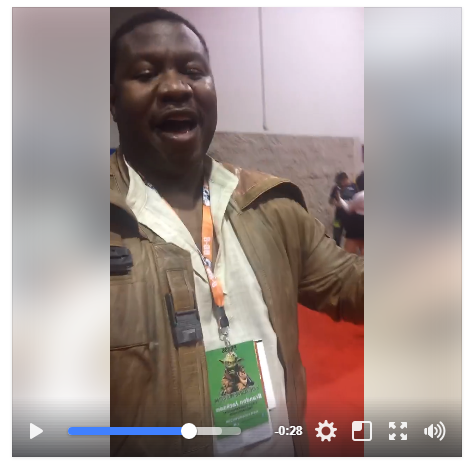 HEAR FROM THE LEGEND WHO HELPED DESIGN THE STAR WARS-THEMED LAND COMING TO DISNEY PARKS, AND SEE A MASSIVE GALLERY OF THE STUNNING MODEL.

Introducing a new Star Wars planet — and you’ll actually be able to go there.
At D23, a massive 50-foot model for the Star Wars-themed land coming to Disneyland Resort and Disney’s Hollywood Studios was unveiled. Based on a never-before-seen planet — and not quite like any we’ve seen in Star Wars thus far — the model is filled with beautiful miniature dwellings and vehicles, surrounded by forest and rocky terrain. (There’s also a BB-8 in there, so keep your eyes peeled.)

The Star Wars-inspired land, opening in 2019, will feature two main attractions: one that lets guests take the controls of Millennium Falcon on a customized secret mission, and an adventure that puts guests in the middle of a battle between the First Order and the Resistance.

To quote a certain Sith Lord, it is most impressive. You can see it up-close in the gallery below.

StarWars.com spoke with the legendary designer Doug Chiang, in attendance at the unveiling just to see the crowd’s reaction, about bringing a new Star Wars world to real life.

StarWars.com: How does it feel to see it unveiled to the public?

Doug Chiang: Oh, it’s amazing. It’s like a film premiere, because you work so hard. And we’ve been working on this for two and half years, which is pretty much the duration of working on a film. To finally reveal it to the public is a little nerve-wracking, because you never know what the reaction. But it’s so heart-warming to see the smiles on people’s faces when they see something like this.