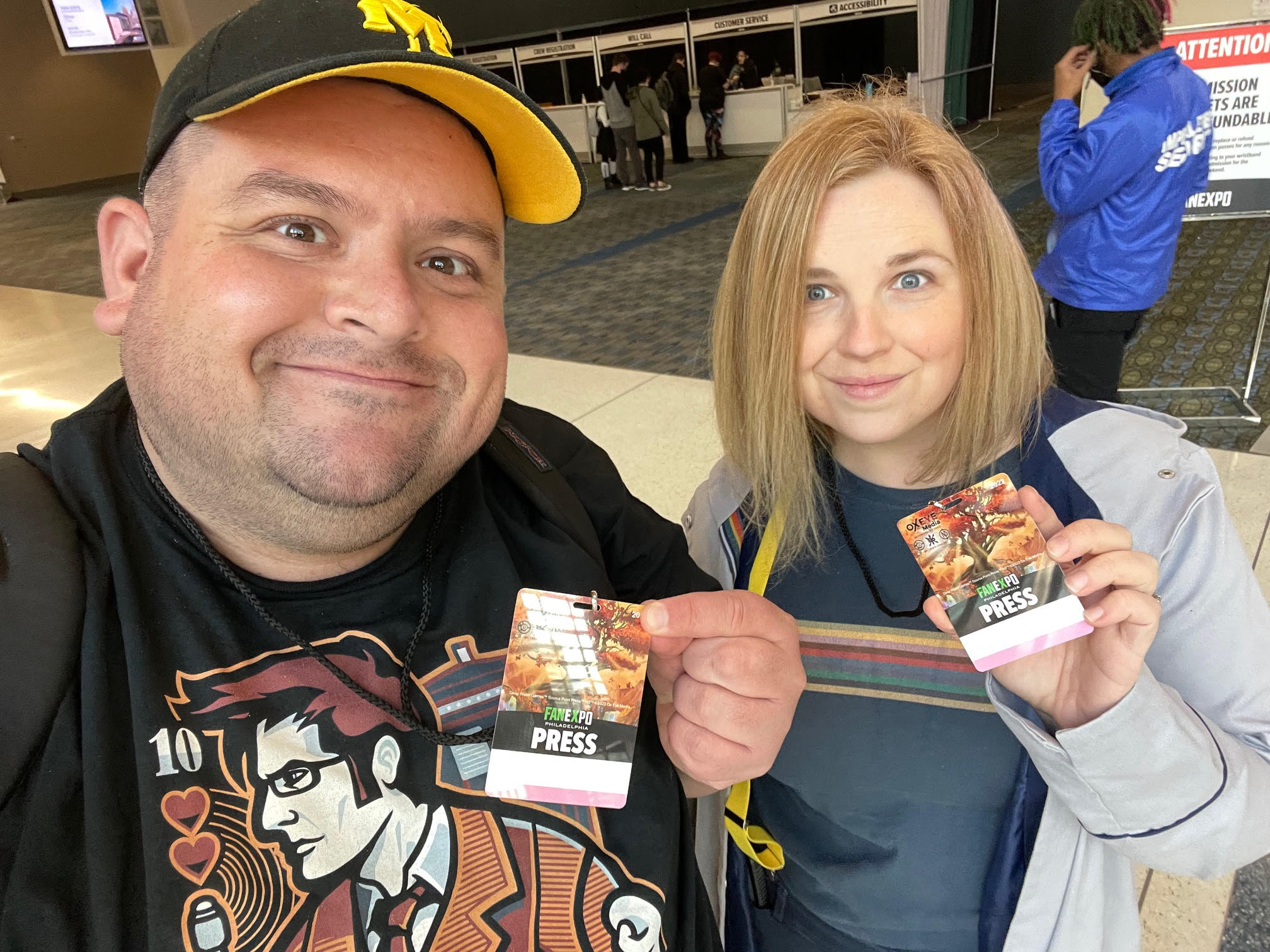 I had the honor of covering Fan Expo Philadelphia as Press for YodasNews.com. While this is a smaller convention compared to others that I’ve attend as a member of Press in the past, it gave me a chance to walk the entire floor, sit in on a couple of panels, and check out some of the celebrities and artists that attended the convention. While the majority of what I experienced on Sunday was not related to Star Wars (the convention was VERY heavy with Star Trek, Harry Potter/ Wizarding World, and D&D esque booths and such), I did come across a few Star Wars highlights to share with you. I hope you enjoy.

Over by the Community Area on the show floor, different cosplay groups were there, all set up and looking to share their love of fandom with others. My friend Marisa (dressed as the Thirteenth Doctor from Doctor Who) and I visited with them for a bit. Of course, the standouts for us were the Star Wars groups. From Stormtroopers to Mandalorians to even a speeder bike you could sit on, we had a blast taking pictures with them. 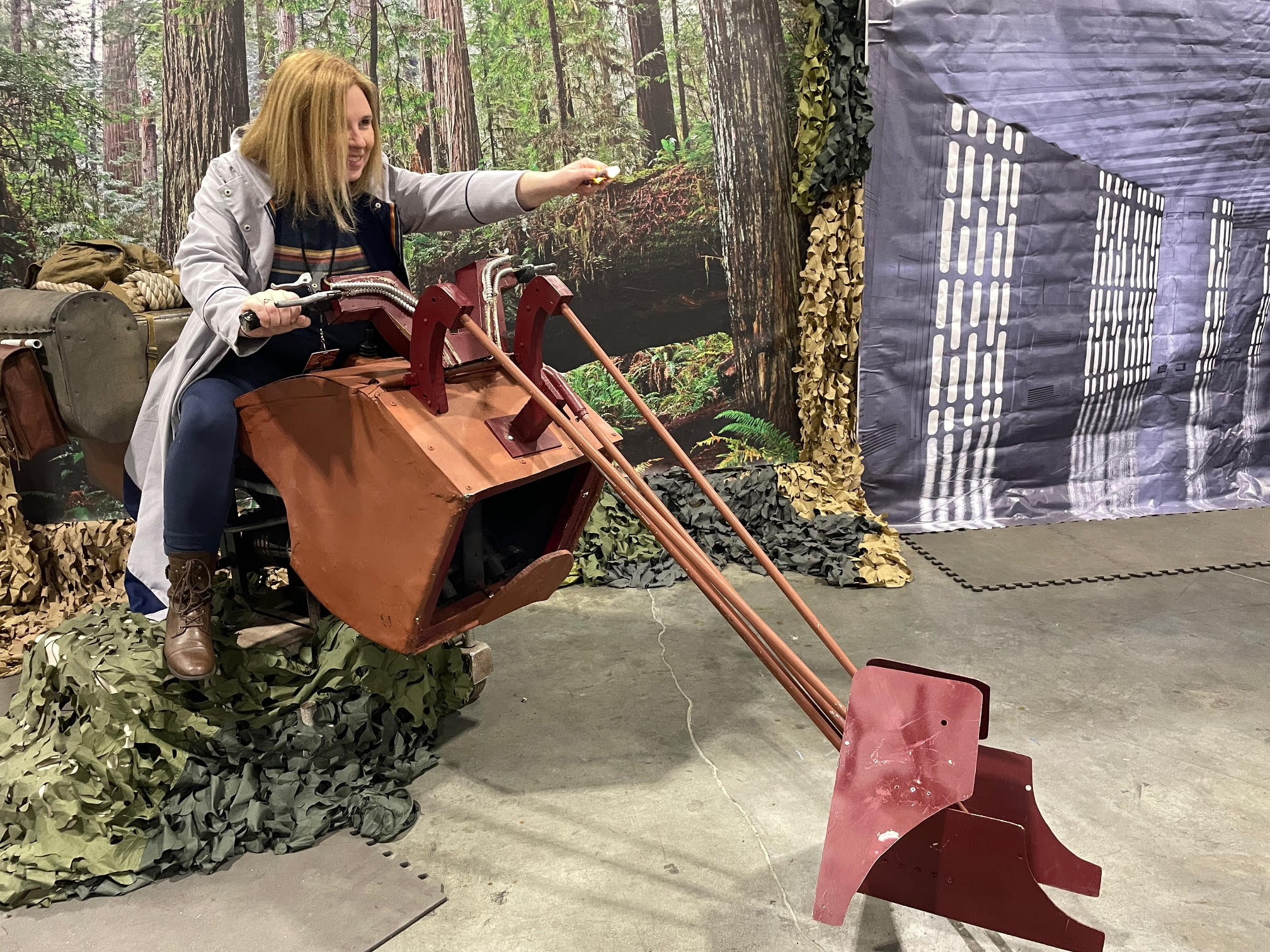 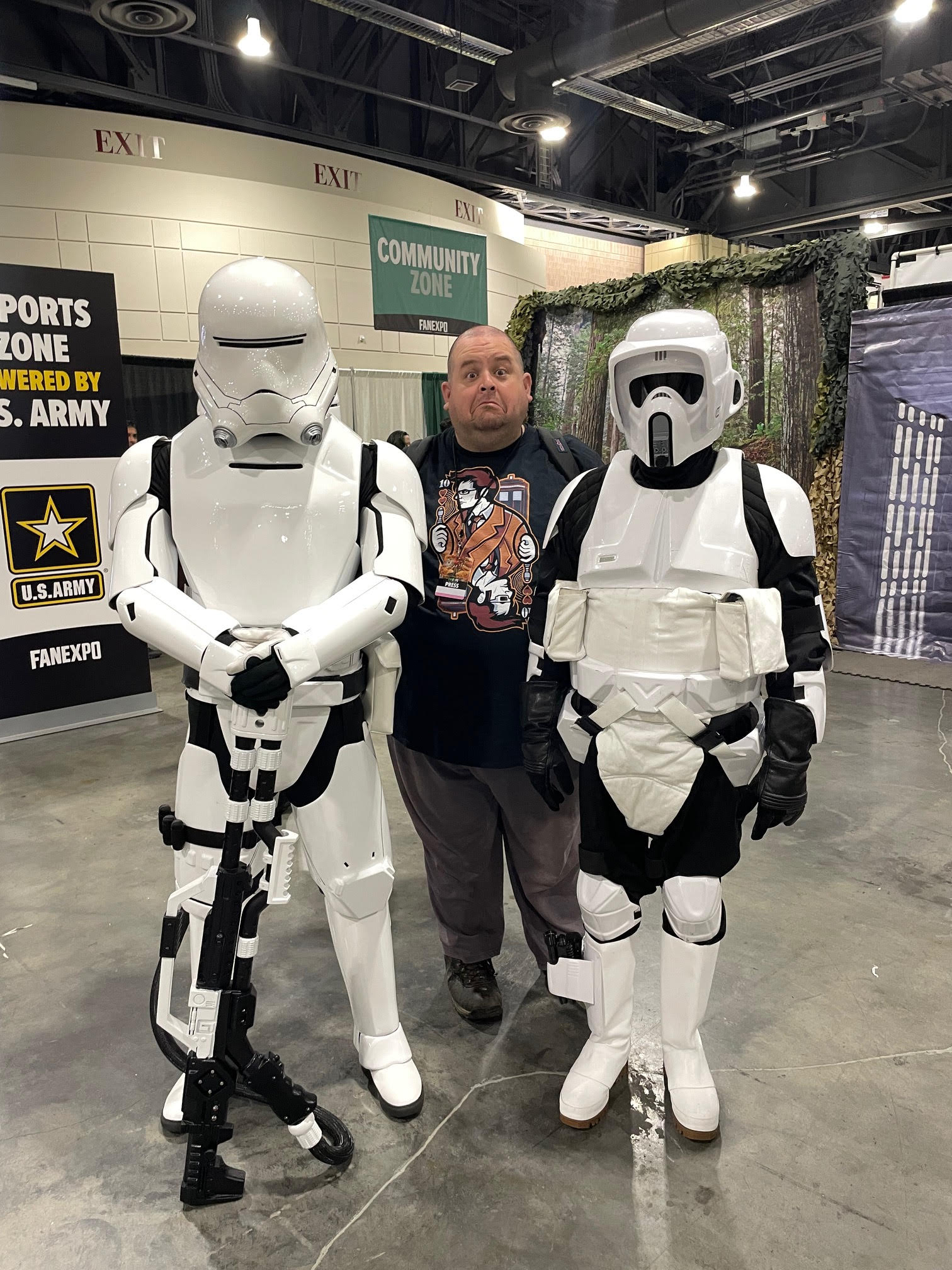 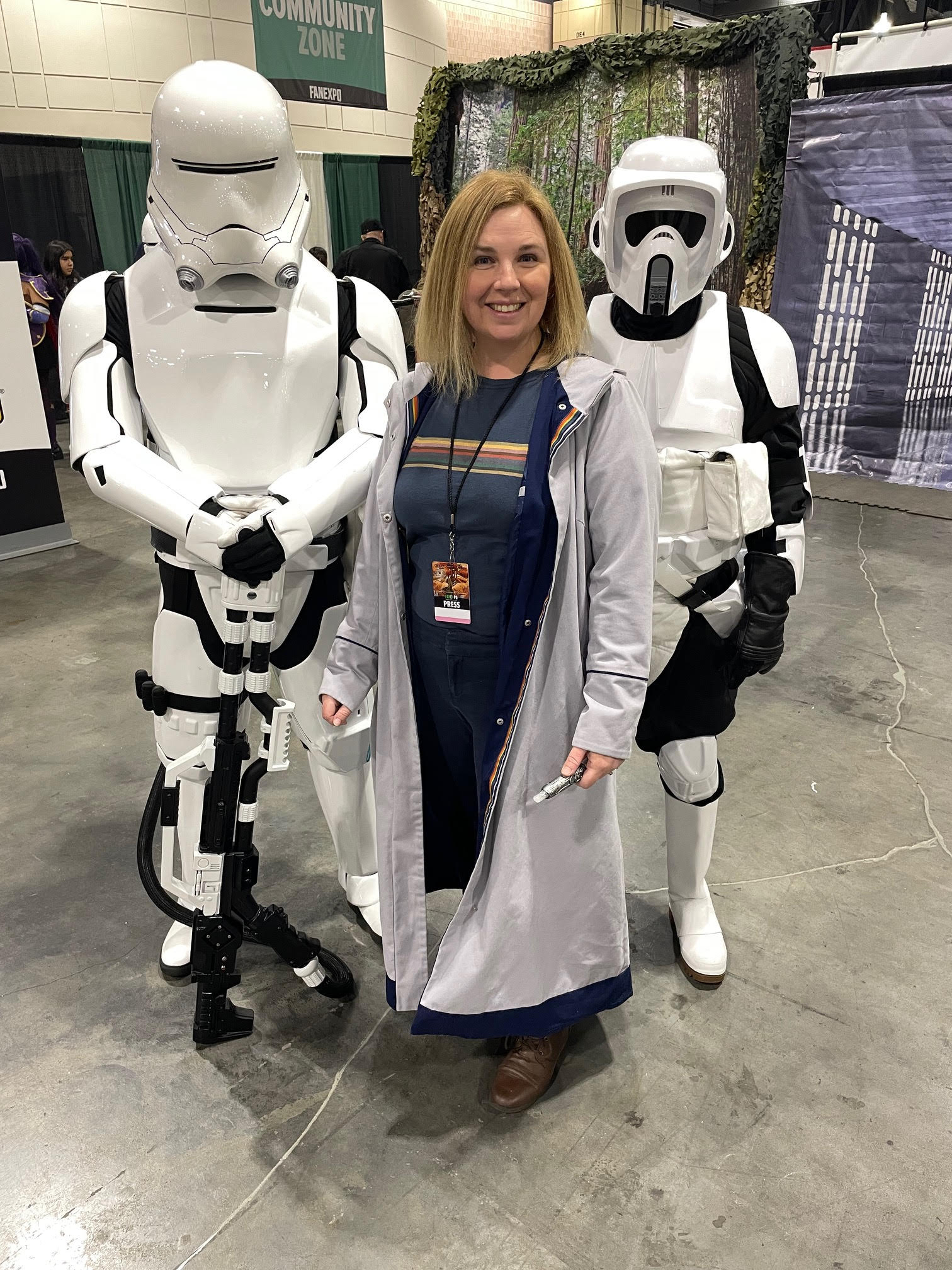 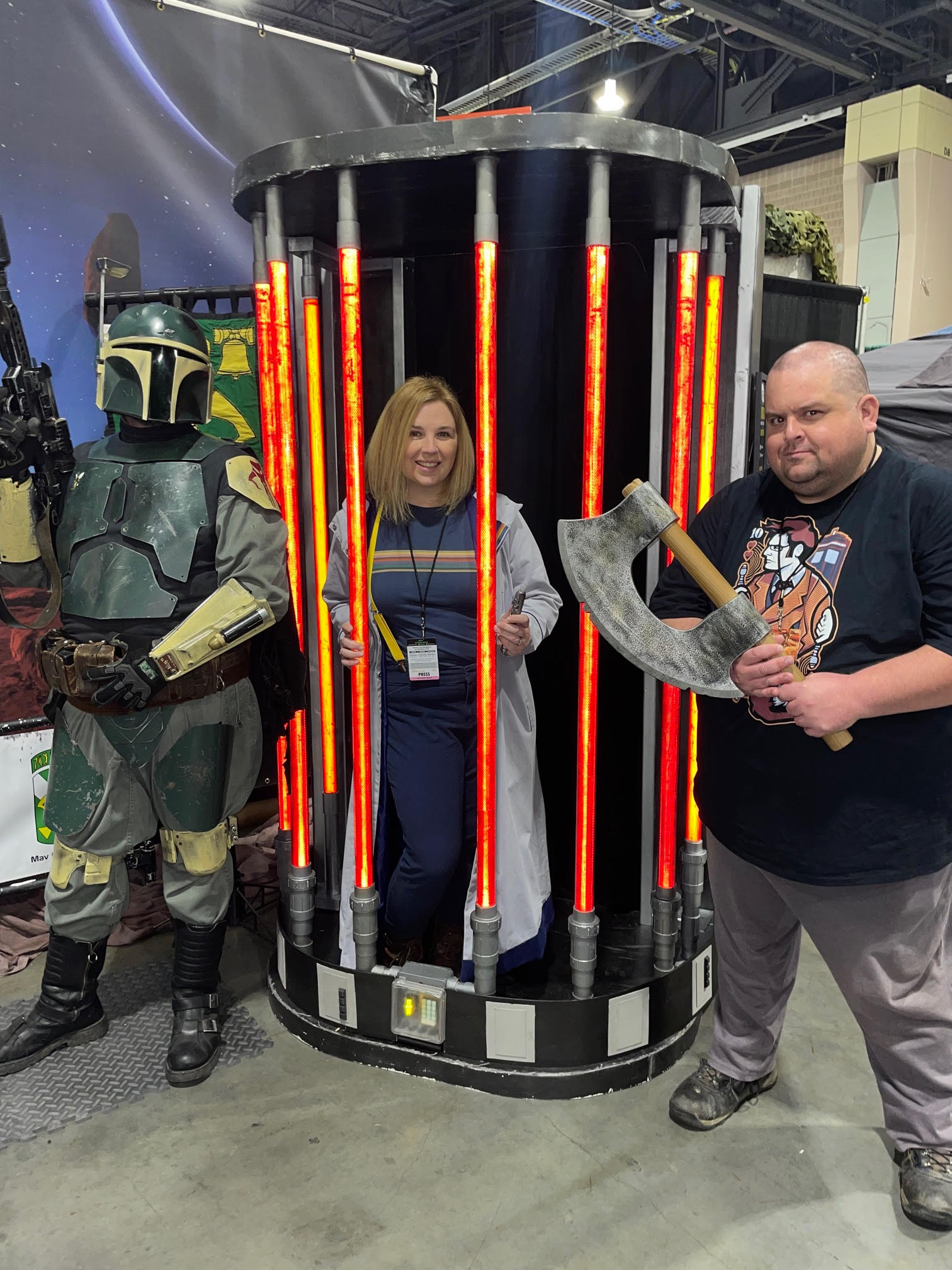 Grogu as a… Companion???

Just outside of the show floor and near the Cosplay Red Carpet, the Long Island TARDIS (The Doctor’s vehicle in Doctor Who) was set up. While I was taking pics of Marisa in the TARDIS, Grogu came strolling along and Marisa took the chance to take on a new companion for a few minutes. Might have been longer… but it’s all that wibbly, wobbly, timely, wimey stuff. 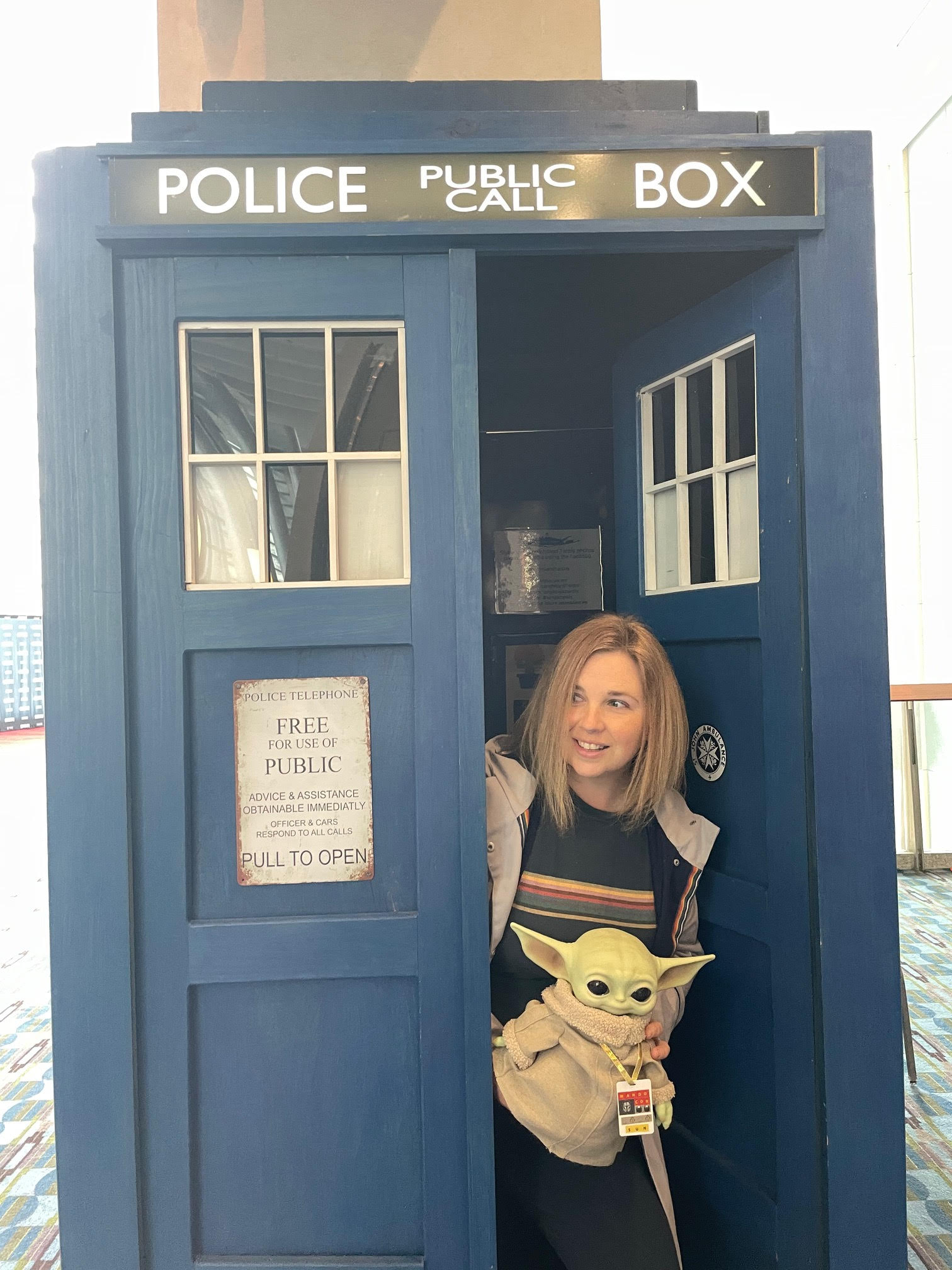 When looking at the list of Star Wars artists that were on hand at the convention, I knew I had to swing by and visit with Joe Corroney. He is a long time supporter of YodasNews, and I have loved a lot of the work he has done for various projects he’s done. He’s also very generous with donating items for us to giveaway each year, which just makes him that much more of an awesome human. It was great finally being able to meet him in person. 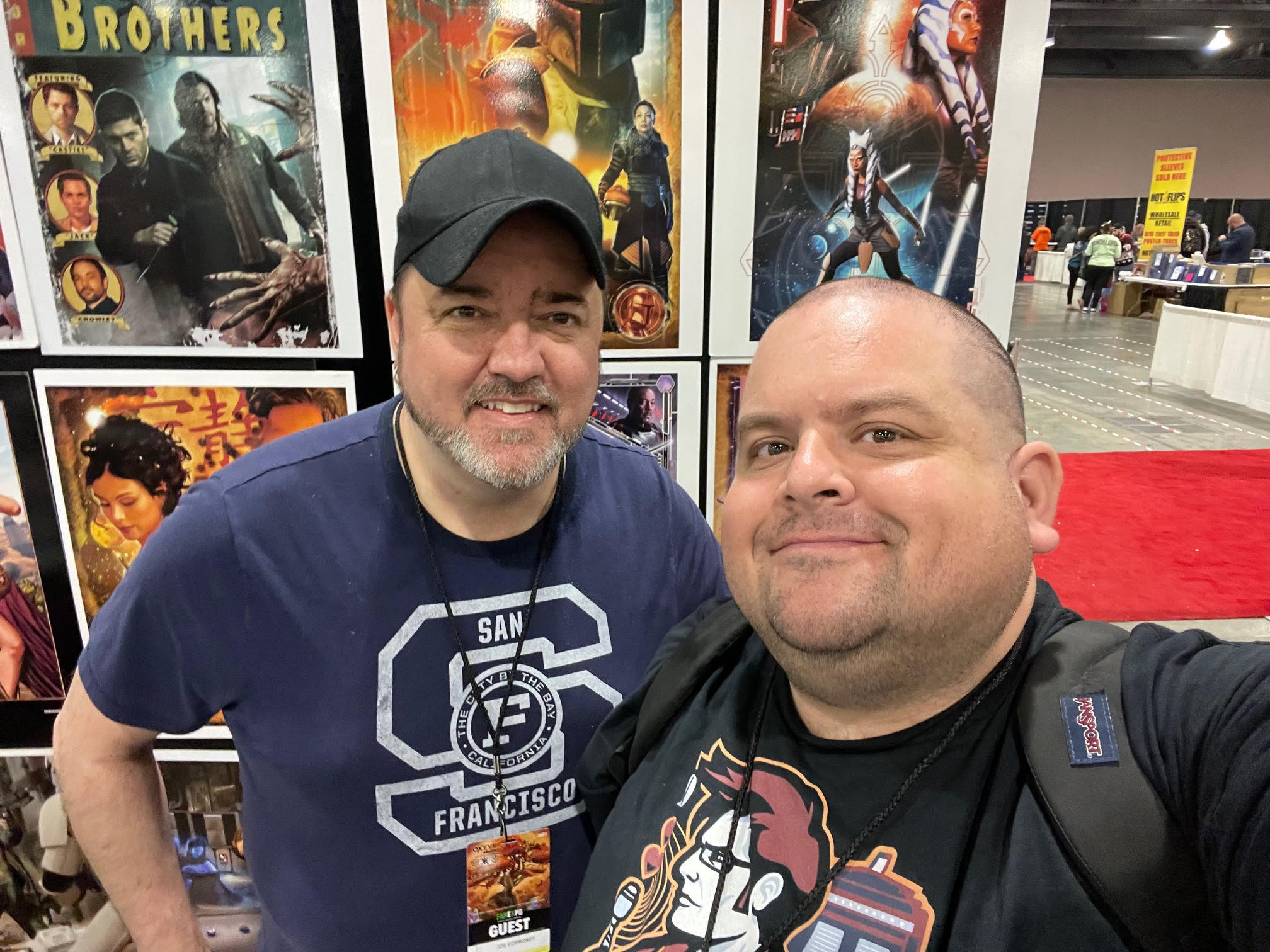 Of course, once I was there at his booth, it was VERY hard to not buy everything! I wanted so much, but settled on five of his smaller prints. Three of them are Star Wars related: a Clonetrooper Propaganda Poster, a beautiful portrait of Rey, and an homage to one of my all-time favorite characters: Admiral Ackbar. The other two prints are ones that Joe did for covers of a Star Trek TNG and Doctor Who crossover comic book series. I absolutely love seeing the Eleventh Doctor and his companions on the bridge of the U.S.S. Enterprise, while Picard and crew navigate thru the TARDIS. 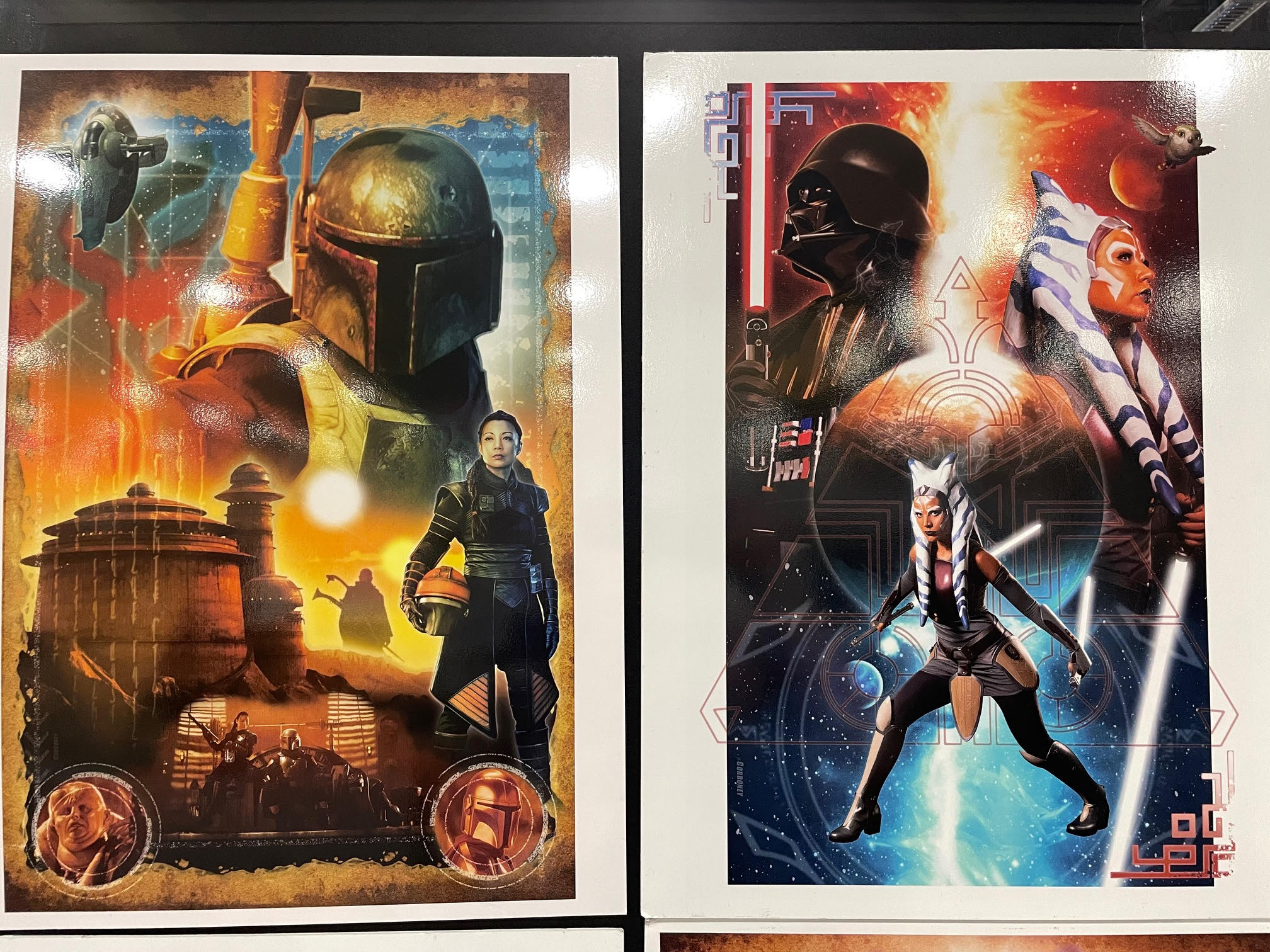 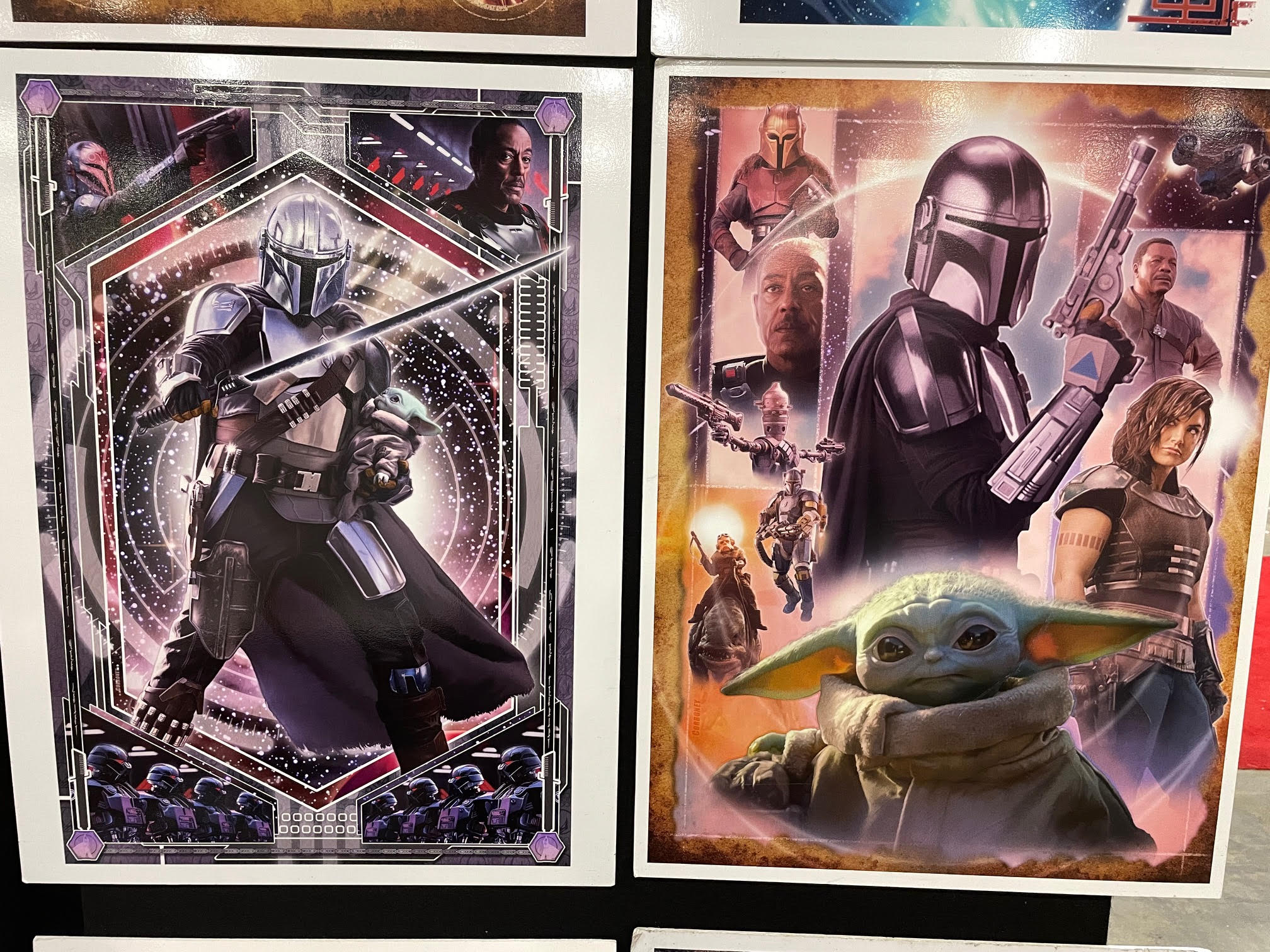 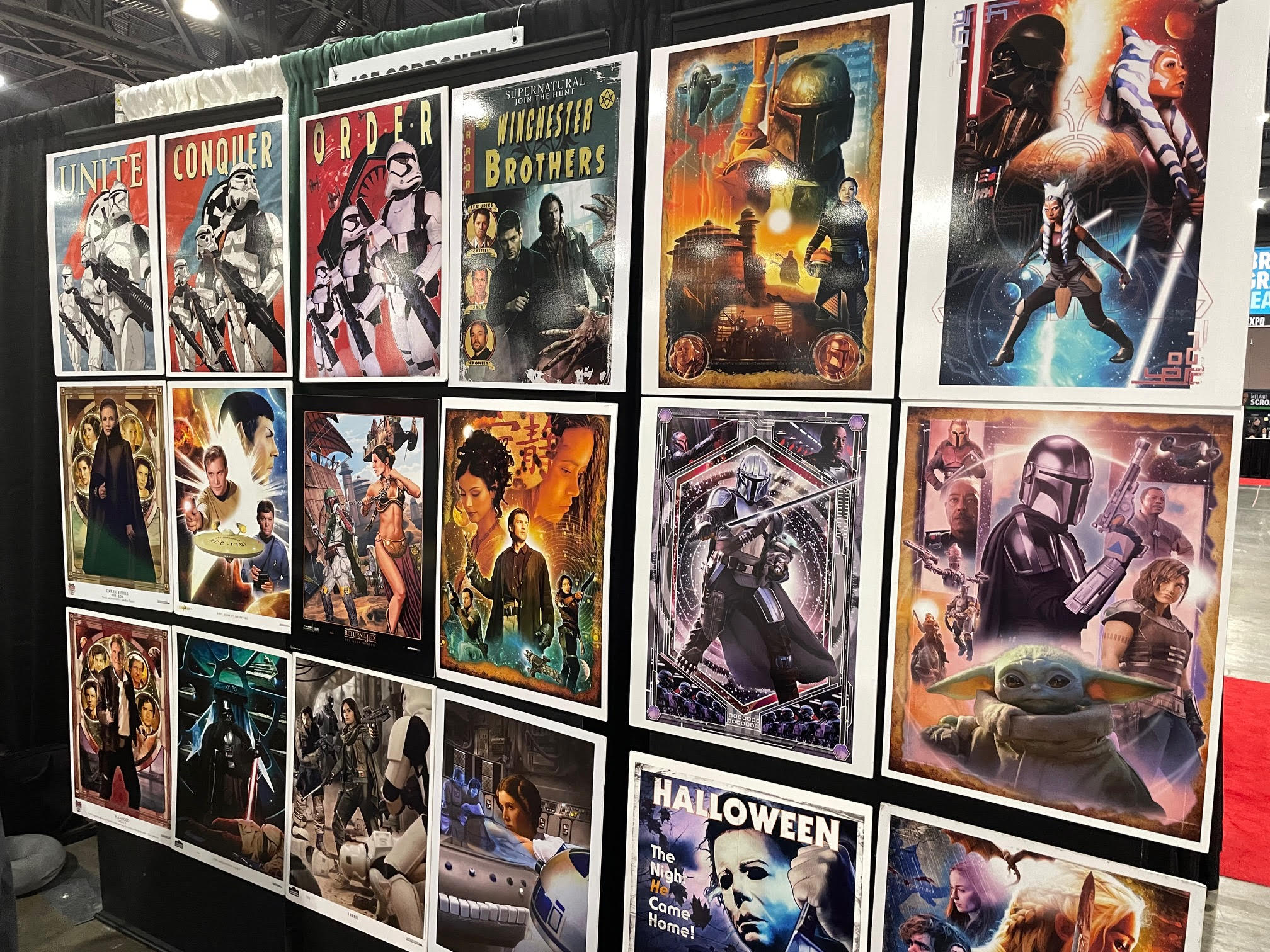 Like what you see? Be sure to head over to Joe’s website or check him out at a convention near you!

The Art of David Wong

As I took a break from walking the show floor to take in a Q&A session with Brent Spiner (Data from Star Trek TNG), Marisa went on her own adventures. Along the way, she came across artist David Wong, who has a great caricature touch to his pieces. She picked up a couple. The first, seen pictures with the two of them, is an awesome Doctor Who/ Nightmare Before Christmas one. Next (and probably one of my favorites) is that of Din Djarin and Grogu. The fact that Grogu is eating a frog in the print? Amazing. 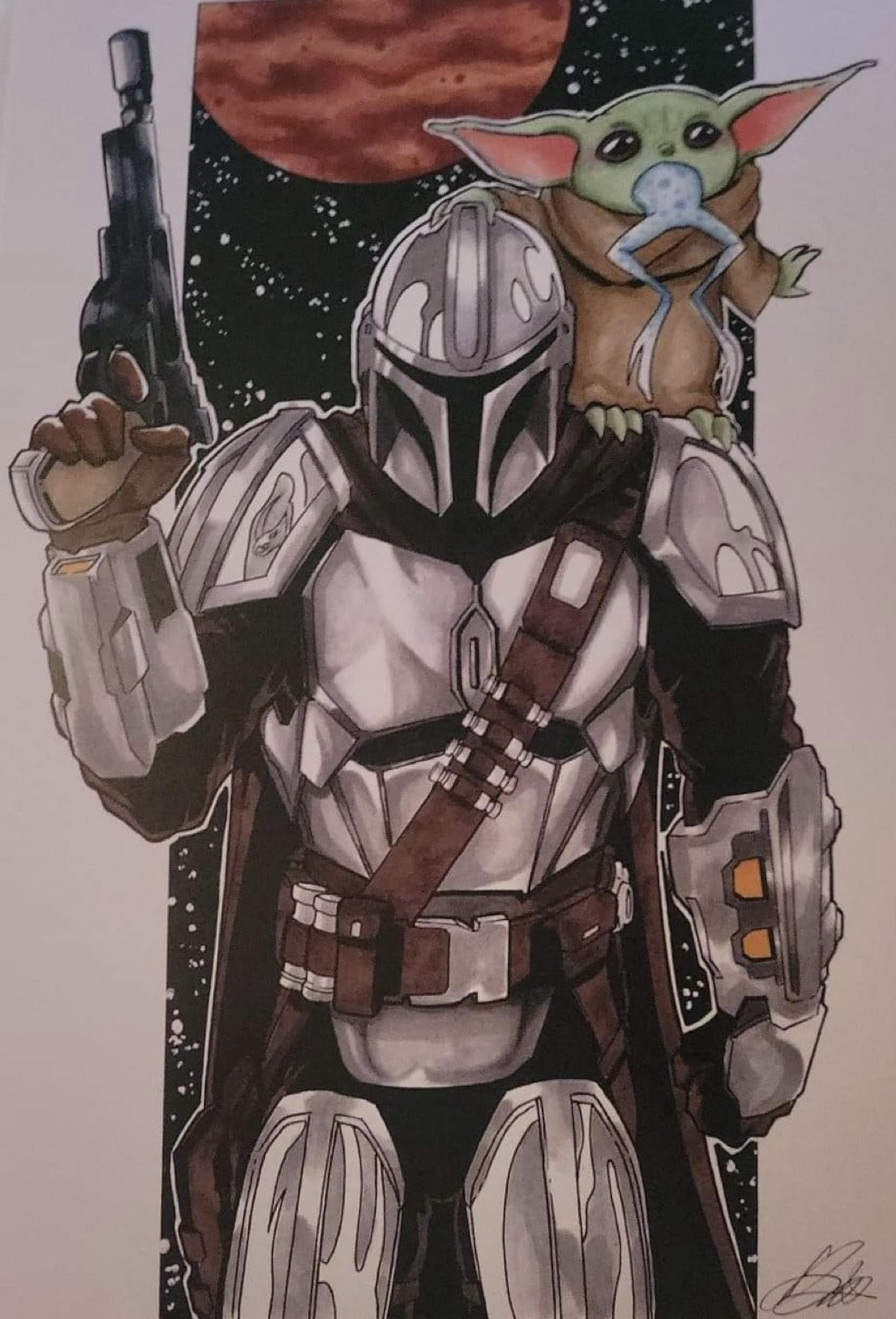 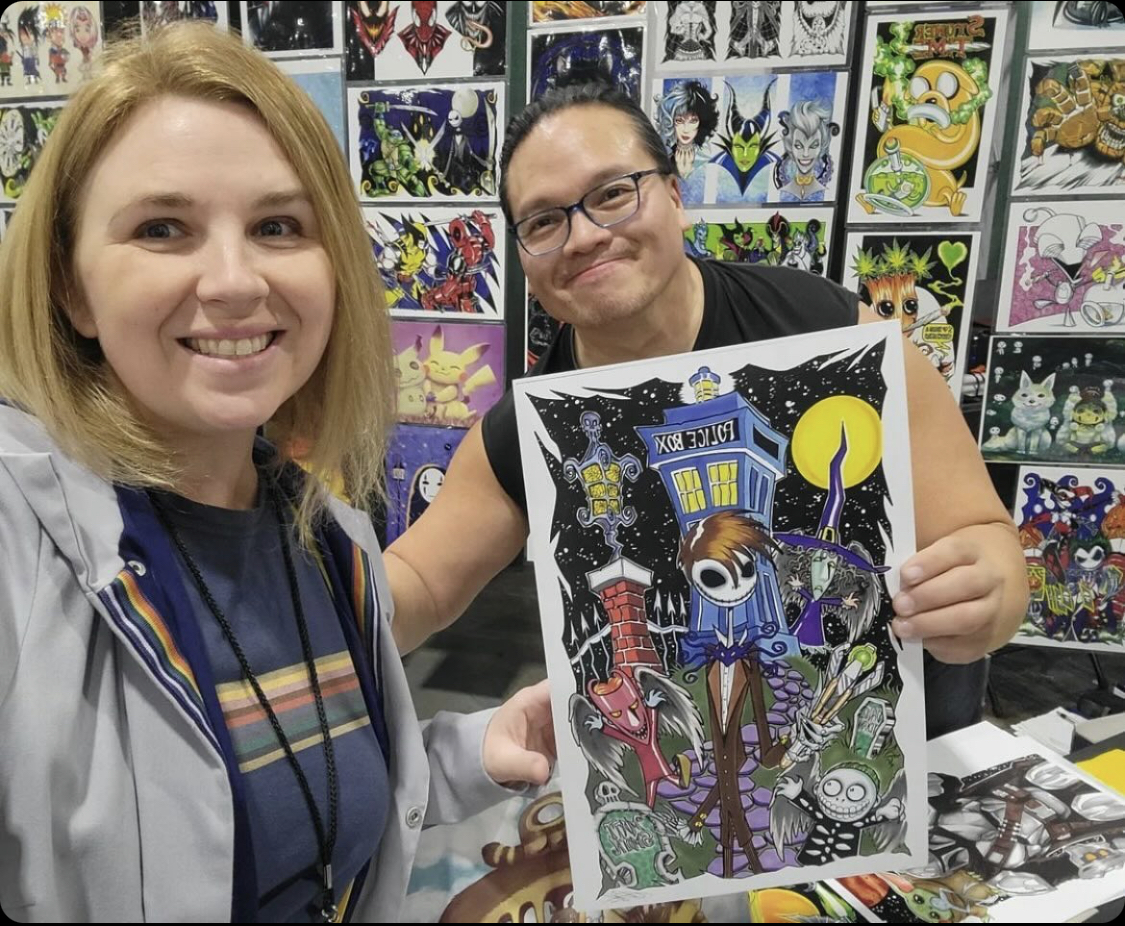 If you’re interested in learning more about David and check out his fun artwork, be sure to visit his website.

Well, that about rounds out my Star Wars highlights for Fan Expo Philadelphia. While I did try to swing by to either say hi to Ashley Eckstein (the voice of the animated Ashoka Tano) or Carl Weathers (Greef Karga in The Mandalorian), either they were not at their autograph booth or the lines were insane. On Sunday, it looked like they were the only two Star Wars actors in attendance. Between only being there on Sunday and there honestly not really being a lot of Star Wars related things on the floor, I didn’t experience much from a galaxy far, far away. Still, I think I found a few gems to share with you.

Just one more thing: both Marisa and I wanted to give a shout out to our main man Mark. When he found out that he couldn’t go, he asked us to cover, which was an honor. Thanks Mark, you’re the best!