For the past 14 years, we have had the honor of bringing you daily news, product reviews and coverage of many conventions.   We have enjoyed sharing our love of Star Wars with you.  As our 14 year anniversary is upon us, we would like to thank both our staff and our readers.  To our staff, we are grateful for the commitment, drive, and energy that you to bring to Yodasnews. Without your tireless dedication, none of this would be possible.  To our readers, it is your dedication and loyalty that keeps alive this great franchise; it is a pleasure and an honor to share it with you.

During the month of February, we have amazing giveaways planned to thank you, our readers, for all your support over the last 14 years!

Also, as with previous anniversaries, we are giving away prizes for both our casual readers and those who follow us on social media. Keep your eye out for special events to test your creativity, fun and competitive trivia nights, and much more. Some of the items up for grabs include Gift Cards to your favorite online stores, statues, mini busts, action figures,  and more! Over 125 prizes worth over $6,000!

It all starts today, stay tuned for how to enter the first giveaway around 8pm EST today! If you don’t follow us on Social Media, now is the best time to do it as we will do random giveaways not posted here on Facebook, Twitter and Instagram! Links at the top right of the website, and on this page!

Some of the items up for grabs include:

You can see these, as well as, other prizes right here. Of course, none of this could be possible without the generosity and support of our Anniversary Sponsors, so be sure to check them out on our prize page and support them. 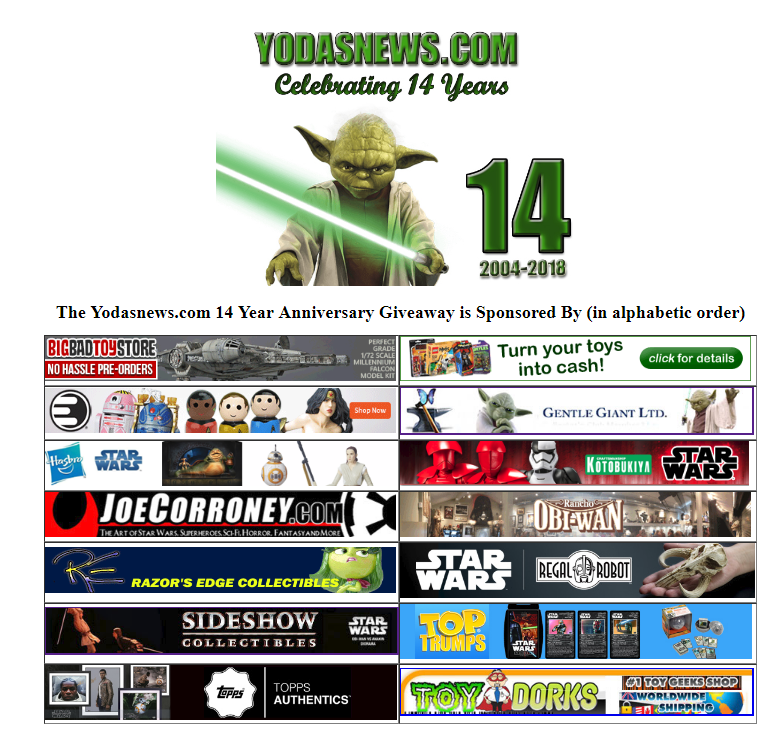 The Celebration Collecting Track schedule is now out, Gus Lopez and his enthusiastic and creative crew return to Celebration with another great round of panels on collectibles. Don’t miss the exclusive Star Tot giveaways, created especially for Celebration Orlando and available only at these panels. Find the full schedule for this and all other stages on the Celebration mobile app and in the printed Insider’s Guide to Celebration.

Click here or below to visit the official site with all the details!

Via Comicbook.com:
The first collected edition of Marvel Comics’ Star Wars series will sell between 225,000 and 250,000 copies in its first printing, ComicBook.com has learned exclusively.

That’s about five times the average first volume trade collection of Marvel series, which average between 30,000 and 50,000 sales. That also means that Star Wars is retaining roughly the same number of readers from peridocals to trades, with sales of the first trade translating to roughly 20-25% of the sales of the series’ first issue.

Since January, Marvel Comics has confirmed for us that Star Wars comics have moved more than 5 million units in the direct market.

Of course, the trade paperback will be available outside of the direct market, opening up the best-selling series to the bookstore market for the first time.

“When Star Wars #1 was released at the beginning of the year we were thrilled at the reception and the record-setting sales numbers. Once again, Star Wars continues to skyrocket the Marvel name even higher with the anticipated pre-order print-run between 200K and 250K units for Star Wars Vol 1 TPB,” said David Gabriel, SVP Print, Sales and Marketing. “This is an unheard of number, but given the success that we’ve had with Star Wars since January, including the insurmountable 5MM units across all the Star Wars’ series, second prints and overprints, we don’t see any issue in reaching such a number of printed copies of this highly anticipated collected edition.”

The series, which takes place between the events of Star Wars and The Empire Strikes Back and features all of the major characters from the film, launched in January. It is written by Jason Aaron, with artwork by John Cassaday. While Marvel handled the official adaptations of the original Star Wars trilogy and had a successful Star Wars series around the time of their theatrical release, 2015 will be the first time in decades that the publisher has handled the Star Wars license. 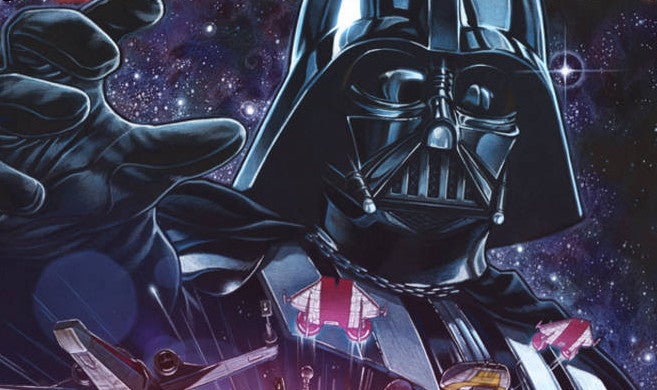 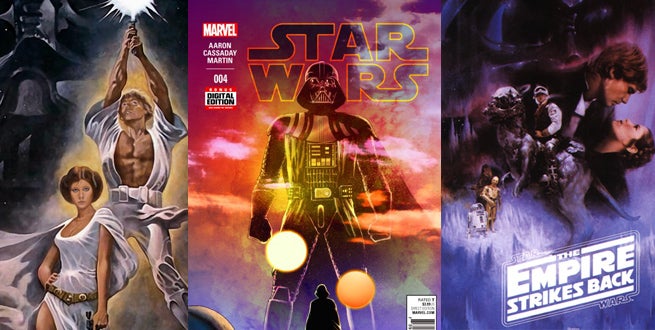 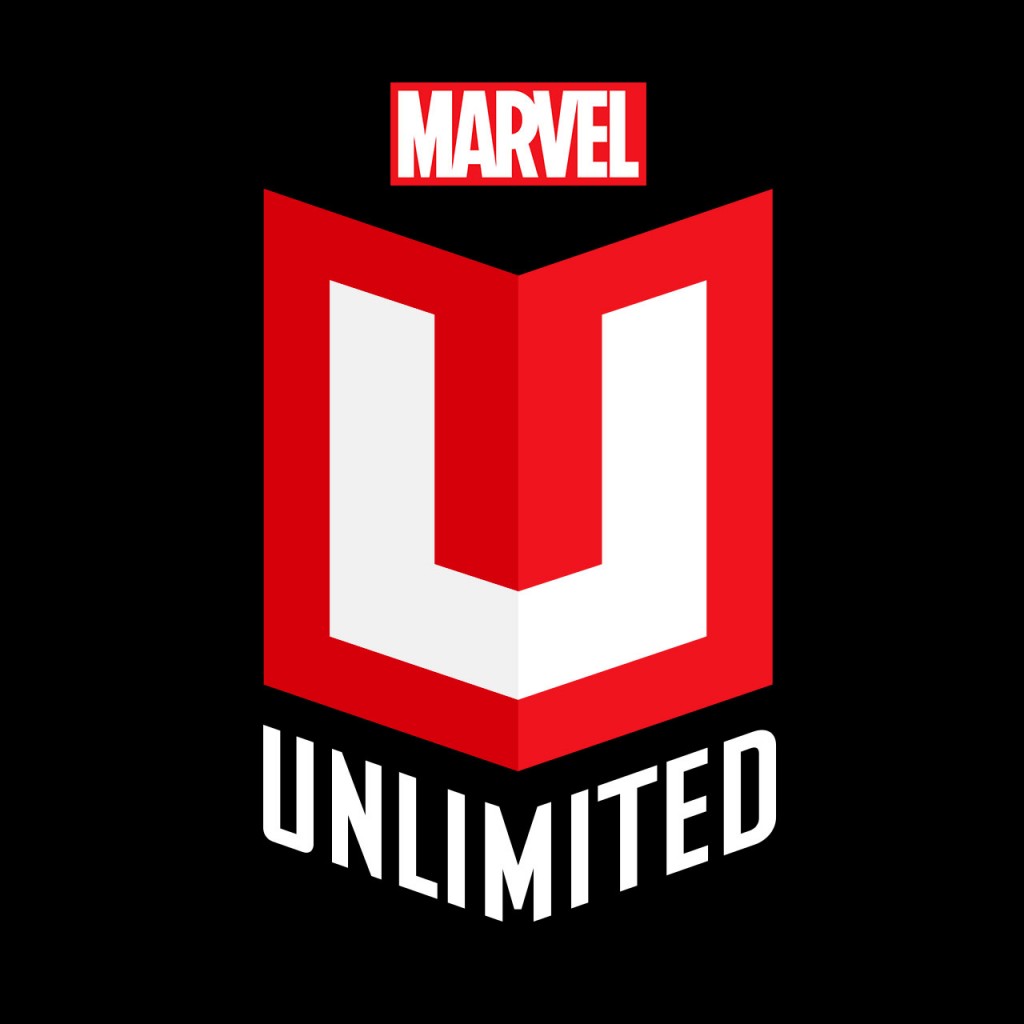 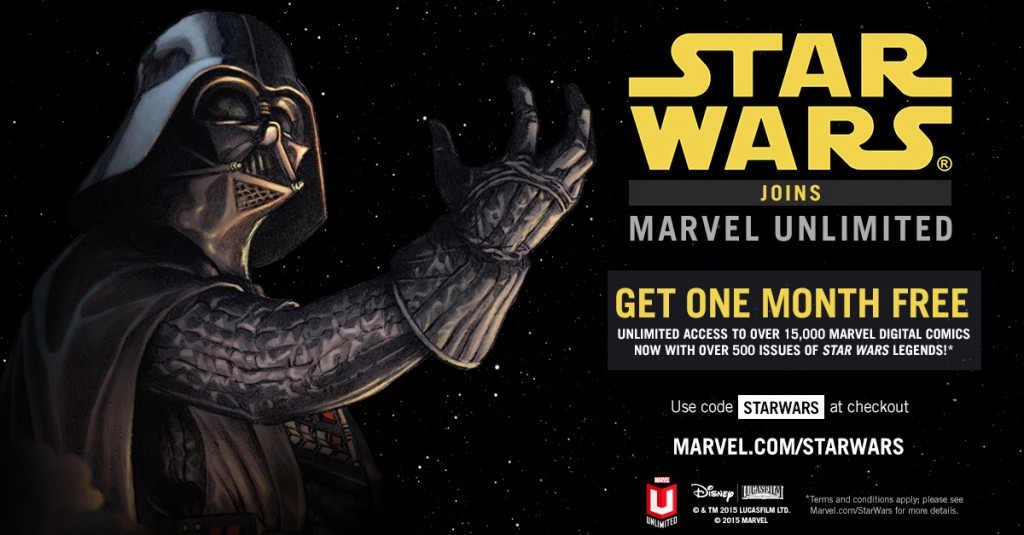 Marvel have taken the reins on Star Wars comics this year, but it wasn’t the first time they’ve handled a galaxy far, far away; they also released the first comic adaptation of the movie back in 1977. Now the company is honoring their Star Wars past with an updated, recolored release of the original series.

The first six issues of the original Marvel Star Wars series will be gathered into one collection as a new graphic novel to be released next month. Although it’s not the first time the classic comics have been made available again (Dark Horse released omnibus volumes of the entire Marvel series while they had the Star Wars license), this new release features updated colors from Chris Sotomayor over the artwork originally drawn by Howard Chaykin, replacing the classic (and admittedly somewhat gaudier) color palette of the original comic. It has a much more modern look — see for yourself! 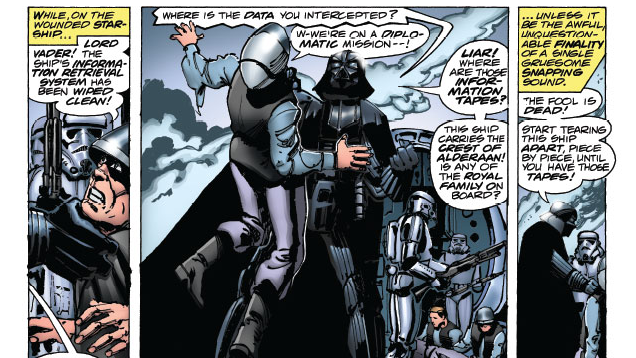 Kanan: The Last Padawan is the fourth Star Wars comic Marvel has launched in as many months. This series is the first, however, not to be set during the period between A New Hope and The Empire Strikes Back. Instead, it ties into the Star Wars Rebels animated series and explores the past of aspiring Jedi-turned-smuggler and rabble-rouser Kanan Jarrus. With Rebels executive producer Greg Weisman at the helm, it should come as no surprise that this series is every bit the worthy addition to the franchise Marvel’s other projects are.

Rather than cover similar ground to that of the Kanan-centric Star Wars: A New Dawn novel, The Last Padawan further dials back the clock to the waning days Clone Wars. In this period, Kanan was a Jedi trainee named Caleb Dume still learning the ropes and getting his first taste of battle. The flashback approach means this book is accessible even for those not familiar with Rebels. Only one scene focuses on the present-day Rebels timeline, and even that stands out as unnecessary. I’m not sure this book would benefit from any sort of ongoing interplay between past and present. 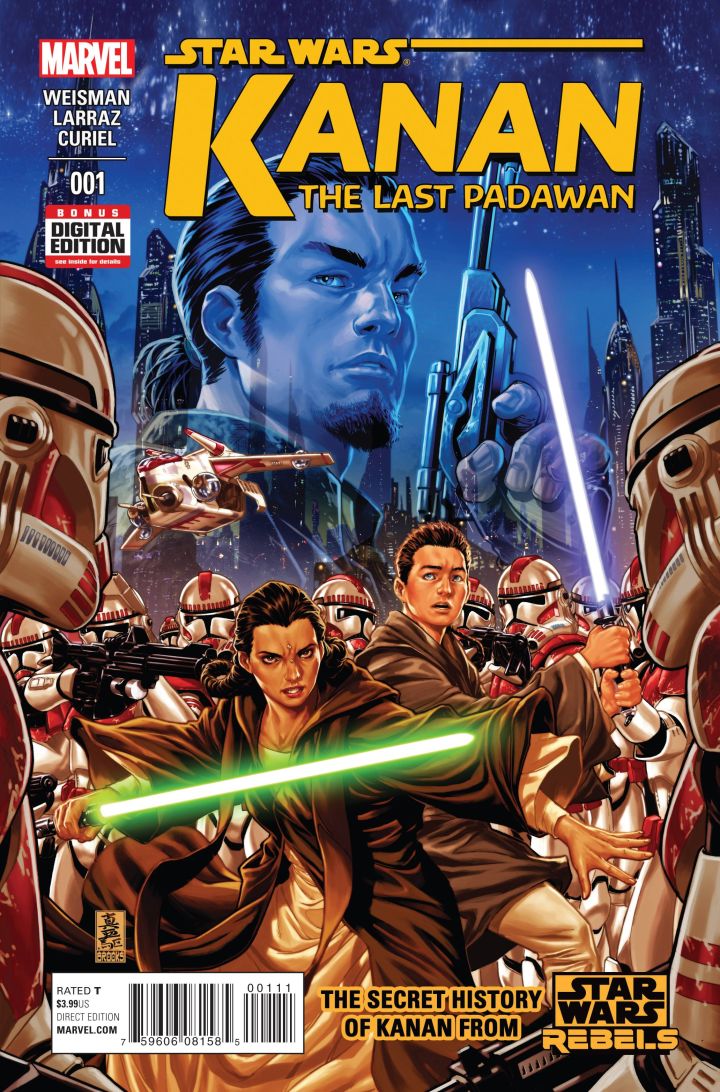 The newest Star Wars comic from Marvel is Kanan: The Last Padawan, written by Greg Weisman and illustrated by Pepe Larraz. The new series will explore the origins of Star Wars Rebels’ very own Jedi cowboy, Kanan Jarrus. The Last Padawan will explain how a young Padawan by the name of Caleb Dume survived Order 66 and eventually became the rebel hero we’ve all come to know and love.

Have a look at a few preview pages that show Kanan take on the separatist droid army during the Clone Wars, as well as a couple of very cool variant covers from issue #1, in the gallery down below. Here is a synopsis for the upcoming new series:

Kanan Jarrus–in STAR WARS REBELS, he’s a cocky, sarcastic renegade fighting against the Galactic Empire alongside the rag-tag crew of the Ghost…but years before, at the height of the Clone Wars, he was known as Caleb Dume, Jedi Padawan under the instruction of Jedi Master Depa Billaba. Neither master nor apprentice ever suspected that the Clone Troopers they commanded would turn on them upon the issuing of Order 66—the order to execute all Jedi. How did Caleb Dume survive? How did he learn to survive on his own? And how did he become the man we know as Kanan Jarrus? Writer Greg Weisman (writer/executive producer on STAR WARS REBELS, SPECTACULAR SPIDER-MAN) and artist Pepe Larraz (DEADPOOL VS. X-FORCE, THOR, INHUMAN) bring us a tale bridging the years between the Clone Wars and Rebels!

Kanan: The Last Padawan will hit comic-book store shelves on Wednesday, April 1. Will you pick this one up?

Click below to see all the images in the full article. At the end of last month’s most-impressive Star Wars #1, our heroes found themselves caught in yet another Imperial entanglement. And the never-saw-it-coming cliffhanger had Luke Skywalker cornered by a certain Sith Lord, ready to battle. Being a comic, you don’t have to wait years to find out what happens next — Star Wars #2 is out today, and StarWars.com has some special preview pages below!