Fortune.com: posted a great (and long) article today about Bob Iger, worth noting for Star Wars fans is the images and information about The Force Awakens and the new falcon.  The cover (seen below) is very cool as well.  Click here or the cover below to read the full article

Our friend Josh Bodwell put some awesome Copic marker sketches based on The Force Awakens trailer that he did. He may make a print set if there’s enough interest so click below to go to his Facebook page and let him know!

We finally got to meet some new characters in the teaser trailer for Star Wars: The Force Awakens, but now we’re getting to put some names with the faces. J.J. Abrams, the film’s co-writer and director, and Kathleen Kennedy, president of Lucasfilm, have decided to reveal the identities of some of their new characters exclusively to EW—and they’ve done it in a retro fashion that should bring a smile to anyone familiar with the phrase “Collect ‘Em, Trade ‘Em.”

That was the catchphrase of the Topps trading card company, which in addition to baseball players and comic book characters put out a series of collectible cards featuring scenes and characters from around the galaxy for the original 1977 Star Wars movie.

There were five rounds of Topps cards for that movie, each one designated by a different color, with red and blue leading the line-up. Right now, Abrams and Kennedy have mocked up three from the red series, and five from the blue series.

Click Here or below to see the names and the very cool way they were revealed!

The Star Wars: The Force Awakens trailer wasn’t just a gift to the semi-dormant legion of Star Wars fans forced into hiding since The Phantom Menace came along. It’s also been tremendous boon to practitioners of internet fan art, arriving just as they began to tire of pictures where Harry Styles and Benedict Cumberbatch and Loki kiss each other on a cloud.

The Star Wars trailer has inspired creativity like little else before it. We’ve had analysis and liveblogs – and even a spoof trailer of George Lucas’s Episode VII, rendered unwatchable by millions of clunky CGI inserts.

But mainly we’ve just had fan art. This is why I’ve scoured Tumblr, Twitter and DeviantArt to bring you a definitive ranking of the key pieces, from best to worst:

1) This, of course, is just about the only sensible way to produce a poster based on a short and deliberately obtuse teaser trailer – just take the most iconic moment (in the case the new, ridiculously impractical-looking crucifix lightsaber), view it from a different angle and make it look really cool. Job done. 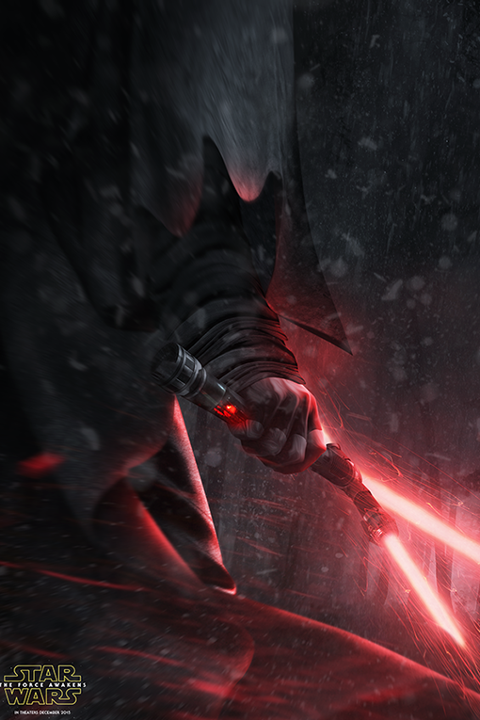 When the teaser trailer for “Star Wars Episode VII: The Force Awakens” debuted on November 28, it “surpassed 40 million YouTube views in less than 72 hours online,” according to The Hollywood Reporter.

In addition to the millions of eager fans who watched the 88-second trailer, quite a few celebrities voiced their excited opinions online. Actors, directors, pro-wrestlers, rock stars and authors alike all tweeted their thoughts about the new “Star Wars” footage.

“As a Kenner-buying, Bantha Tracks-reading Star Wars fan from way back,” indie filmmaker Kevin Smith tweeted that he had plenty to say about the new trailer. Smith told a story about seeing the trailer for “The Empire Strikes Back” with his parents when he was a kid. “It was a real time machine back to my youth,” Smith stated in a video. “Take my money J.J.!”

Director James Gunn tweeted, “Because everyone keeps asking me my opinion, I LOVED the Star Wars trailer. It infused me with a giddy-little-kidness.”

“That ‘Star Wars’ trailer gave me the tingles,” filmmaker Edgar Wright tweeted. “So thrilled to see John Boyega in there.”

“Star Wars! Language and emojis fail to express what’s in my heart at this moment,” actress Anna Kendrick tweeted.

After seeing the trailer, “Hannibal” creator Bryan Fuller tweeted, “How am I supposed to get any writing done today?”

The Star Wars Episode VII: The Force Awakens teaser trailer — 88 seconds of geeky goodness — has surpassed 40 million YouTube views in less than 72 hours online, according to a preliminary estimate by The Hollywood Reporter.
For comparison, the Fifty Shades of Grey trailer did 36.4 million YouTube views in its first four days when the trailer dropped in late July.
Avengers: Age of Ultron racked up 50.6 million in its first five days, giving it the biggest debut week of any coming attraction in 2014.
THR and technology firm Zefr use a Monday-to-Monday week to calculate trailer views through proprietary monitoring of YouTube. Comprehensive Zefr numbers will be available Monday (Dec. 1).
The Star Wars trailer has been met by positive reviews, parodies (what would Lucas do?), a Lego version and comparisons with the Jurassic World trailer that dropped a few days ahead of The Force Awakens.

When Disney and Lucasfilm gave us a quick sneak peek at what’s to come in the new “Star Wars: The Force Awakens” teaser trailer yesterday, fans everywhere showed their excitement online, dissected the trailer image by image and a few even debated the new lightsaber design.

With all the fan hullabaloo over the cast appearances, new lightsaber and the ball-rolling astromech, it’s comforting to know that you can rewatch the entire teaser trailer lovingly remade in Lego.

Everything from appearances of “Star Wars” newcomers John Boyega, Daisy Ridley and Oscar Isaac to the iconic Millennium Falcon’s exciting flyby is recreated brick by brick in Lego form. Even the cameo of the new lightsaber design gets its own Lego likeness.

Lego tributes to “Star Wars” have always been popular online, so when the first official photo of some of the main cast of the new “Star Wars” film was released in April, it was quickly re-created in Lego.

In “‪Lego Star Wars: Episode VII – The Force Awakens Teaser Trailer‬” by Youtube user Snooperking, we see cast members, including the Stormtroopers, in minifigure form, plus Lego builds of X-wings and the Millennium Falcon.

“I had nothing to do yesterday so I started once the trailer came out so I built the Falcon, the X-wing, the speeder bike, a mini TIE fighter, tried to build all the sets, and get all my minifigures put together,” Snooperking stated on his Youtube page. “Then just filming took forever, especially the special effects.”

To make the special effects in the video, Snooperking attempted using a makeshift green screen but decided in the end to use a thread to move the TIE fighter around the Falcon.

It’s always good to have some fun and laugh, this fan made trailer is just that, so watch and enjoy!